Quinn divorcing herself from Vito 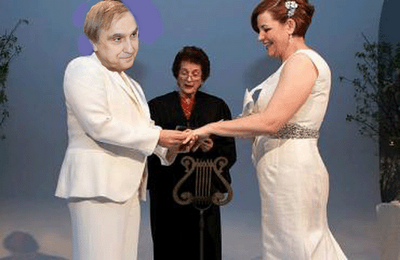 Here's the latest on the redistricting pickle that Christine Quinn got herself into:

In an effort to eliminate a growing political problem, City Council Speaker Christine Quinn is desperately trying to convince city lawmakers to vote down the proposed new map by arguing it will help their chances of staying in office, a source said.

Many of the Council’s 51 members are reluctant to go back to the drawing board to reshape one messed up district that was secretly drawn to help the embattled Assemblyman, the source said.

In response, Quinn's top aides are frantically calling Council members arguing that voting down the proposed lines would help them win re-election by stalling the final maps release until March or April, the Council insider said.

Leaving the lines in limbo until that point would handcuff potential City Council challengers who would be left with just a few weeks to figure out what district they reside in and who they are running against before the likely June Democratic primary.

City Council Speaker Christine Quinn insisted yesterday she had nothing to do with a proposed map change by the city Districting Commission to help embattled Assemblyman Vito Lopez.

“I’ve never spoken to a member of the redistricting commission about any lines. I wouldn’t know the chairman if I saw him tomorrow,” a testy Quinn told reporters.

The speaker has tried to distance herself from a proposed move by the Districting Commission — a 15-member body assigned to redraw council district lines this year — to shift Lopez’s home block of Stanhope Street in Brooklyn into a neighboring council district, where his power base lies.

Although the Districting Commission’s proposal for new City Council lines was initially expected to easily pass with no changes, Council Speaker Christine Quinn has officially thrown a wrench into that process. In a letter to the Commission’s chair, Ms. Quinn said she is “requesting in the strongest possible terms that the Commission withdraw its submission to the Council to receive additional input from the public.”

“[I]n reviewing the lines, I have a few concerns that I believe would have been vetted and addressed during another round of public hearings. The most significant concern I have relates to the new lines for District 34,” Ms. Quinn explained. “I am requesting in the strongest possible terms that the Commission withdraw its submission to the Council to receive additional input from the public. After you have satisfied your benchmarks for review and public comment, the Commission should then resubmit a plan to the Council with new district lines. I recognize that the Charter still affords the Council the opportunity to vote on the plan after this formal submission.”

It’s not immediately clear if the process described in the letter, whereby an up-or-down City Council vote is seemingly skipped by simply withdrawing the map, is technically correct. A Commission spokeswoman told Crain’s Insider the legislative chamber needs to reject the map first.

Hat tip to True News.
Posted by Queens Crapper at 12:10 AM

BS!
Quinn has been caught with her knickers down!

She's a lying, power hungry cur, and would do ANYTHING to become NYC's empress!

It looks like Speaker Quinn just put both feet in her mouth!

Seems like Quinn's becoming increasingly desperate, if you ask me.

She thought she could pull a fast one, cut deals with the power brokers and squeeze her way into being Mayor.

Instead, Quiin's been exposed for the power-hungry wanna-be boss that she has always been.

I'd vote for a 4th term for Bloomberg over this corrupt hag!