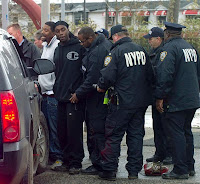 At least half the post-Sandy looting busts have been tossed out, despite much grandstanding on the part of Brooklyn and Queens DAs, the Daily News has learned.

One of the most publicized looting incidents — in which 16 people were rounded up for raiding a Coney Island Key Foods the day after the storm — resulted in just two indictments for third-degree burglary, records show.

Six other cases were dismissed by a Brooklyn grand jury late last week, and eight were knocked down to trespass raps, which are violations, not crimes.

Queens District Attorney Richard Brown likewise promised “zero tolerance for looters who would exploit a natural disaster like Hurricane Sandy for their own personal gain.”

Only seven of 22 Brooklyn looting cases will be criminally prosecuted. In Queens — where the cases are progressing more slowly — five of 15 Queens cases have led to felony indictments so far, prosecutors said Monday.

In the Rockaways, at least 15 people were arrested for breaking into a string of stores in at least seven separate incidents throughout the storm-ravaged peninsula. A grand jury declined to indict three of those cases, and six cases are still pending.
Posted by Queens Crapper at 12:39 AM

That's too bad.
If they national guard had been there, they would have been shot on the spot, and saved NYC taxpayers a lot of money!

I guess crime does pay! Looters should be shot on sight. It's the only way to stop this horrible crime. Can't imagine someone taking advantage during a storm crisis. Just shoot em.

These guys have a future as democratic politicians.

You racist whites. Brothers were just doin' what necessary to survive in whitey's world.

Maybe it's "whitey's" world because the "bros" are too busy smokin' crack instead of crackin' the books.

Malcolm X was right about drug slaves...
so the slavery has morphed into another form.

But this part of the world ain't "whitey's".
You bros live there.
So it's bro upon bro crime, as usual.

Civilization is built upon cooperation and restraint.
Go wilding and see what the rest of NYC thinks of you.

No racism here...just the facts.
The same kind of criticism is directed toward white trash...blue and red trash too!

on Tuesday October 30th at 8am, a mob of blacks moved out of the Hammels project on Beach 85th Street in Rockaway. they stormed a small shopping plaza via the back doors that face Holland Avenue. These doors were either already propped open or easy to open in the flood waters. understand that the toxic water was four to five feet high. this mob was running in the dark in sewage water. Stores that suffered looting were CVS, Strawberry's, Keyfood, laundromat,liquor store, sneaker store & radio shack. these bastards proceeded to hawk what they had stolen in at some points, waist high flood water. These same bastards now have electricity, heat and hot water thanks to city financed generators. Those generous people who are volunteering by distributing food, water, supplies, doing back breaking labor for free digging out homes, tearing out sheetrock are with out heat, hot water, cooking gas and electricity. In some cases, no running water. so the looters get to live w/ what they need while the good hearted suffer? what is wrong with this picture? there is also looting going on in the Rockaways that is not being reported on. Why are the people in the housing projects being rewarded for being such lowlives? how many white people were involved in looting and how many black people are donating their time and expertise to rebuild Rockaway?

If you think that living in the projects is living the good life at government expense...then move there.

I'd rather pay for my middle class existence and support the "low lives" with a portion of my taxes than to give it all up and live "the good life" on the dole in public housing .