How the Grinch tried to steal Thanksgiving 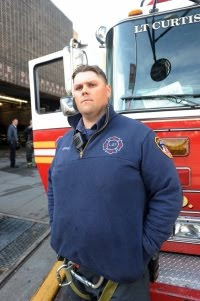 Bobby Eustace, a firefighter out of Ladder 27 in the Bronx, has been serving free hot food to the homeless and displaced and to relief workers and volunteers in Breezy Point, Queens, since two days after the hurricane hit.

On Sunday, Eustace and dozens of fellow firefighter volunteers served 800 free hot meals from a steamy Army tent in this hemorrhaging beach community, where there are no longer stores or restaurants, where most people have no gas to cook with, no heat or hot water and no hot food.

That afternoon, a freon-blooded inspector from the city’s Department of Health issued Eustace a notice of violation for not meeting the same food-handling standards as, say, the Four Seasons.

This is beyond outrageous.

This is Emperor Bloomberg’s bureaucracy gone completely mad in a time of death and destruction in the week of Thanksgiving and when the decent people of this city have united to help the unfortunate.

This is what the city of New York did for the relief effort of Sandy victims.

This notice of violation is a violation of human decency.

Mayor Bloomberg should bury his head in shame in the sands of Breezy Point.
Posted by Queens Crapper at 12:42 AM

This reminds me of the absurdity during hurricane Katrina, when FEMA firefighters were sitting in Atlanta receiving training on sexual harassment instead of being deployed to New Orleans:

When FEMA called for firefighters for "community service and outreach," 2000 highly-trained firefighters showed up in a staging area in an Atlanta hotel, believing that their skills would be used, or would better be used, for search and rescue operations. The firefighters, who were all paid by FEMA for their time, found themselves undergoing training on community relations, watching videos, and attending seminars on sexual harassment in a hotel, waiting days, in some cases, to be deployed in a secretarial or public relations position. Some firefighters called it a misallocation of resources, others were simply frustrated at the delay.

Maybe I shouldn't give the NYC bureaucrats any more stupid ideas!

Another way for Bloomberg to say F*ck You to Queens County.

That micro managing midget will cost NYC billions to recover from his heavy hand.

How much more must be endured before that tyrant Bloomberg is gone?

Emperor Caligula would have shown better sense.
Mayor Mike's mind has gotten twisted out of shape.

Mayor Bumberg's general attitude is f--k you to everybody beneath his class, not just Queens.
If you're not rich like he is, then it's your own fault.

While Bloomers is the top of the sh*t pile, the agent who wrote that violation is also accountable. . . unless that notice was based on something really, really bad? I'm seeing some well-meaning volunteers doing things that put people at risk; just doing good does not make the doing good. Of course we all know the FDNY is above any question.

I guess this means no fourth term.?

Yet another thing to remind Emperor Bloomberg and his protege Princess Quinn about when they decide to grace the island with their presence during the St. Patrick's Day Parade.

I know the pride that runs deep in this community and have no doubts that some sort of parade will take place.

Hopefully. But don't count on him not trying something to keep control.

And Firefighter Bobby Eustace and his dozens of firefighter volunteer friends just let this piece of shit inspector walk away without forfeiting the use of all of his limbs? This kind of thing would have been handled much differently back in the day.

The people that put him in office as they overrode term limits were rewarded, when they stood for election, not with a majority, but a Roman Triumph.

Those people are in office today.

There is absolutely nothing stopping them from putting him up for the fourth term.

This should be on the news - this is UNBELIEVABLE!!!

GOODBYE AND GOOD RIDDANCE to Bloomberg - can't wait until he's gone . . . cares ONLY about the wealthy people in Manhattan - pig that he is.

Unfortunately this has happened many times before to well-meaning, big-hearted people trying to make up for the city's shortcomings in providing aid. If the city was adequately meeting the needs of the unfortunate, then I would somewhat understand the DOH's position. But when the city has the gall to write up violations that they know will result in the needy being turned away, I call that criminal.

Being that Doombags has no shame, perhaps we ought to take it upon ourselves to bury his head in that sand. Yeah, that's the ticket!

So private sector and charitable people are once again proving their worht and the government ineptitude is proving itself. Why in God's name would anyone want more government in their lives? People, do it yourself, and arm yourselves. The end is near.

City administrative workers are the laziest people on earth.
Has anyone seen the list of city agencies on the NYC.gov website. There are nearly 200 agencies listed!!! Except for a few vital ones, why do we need most of the others? What do these workers do all day? Seems like the city could save a mint by getting
Rid if hundreds if non -essential workers!