Bloomberg not empathetic because he's a great manager 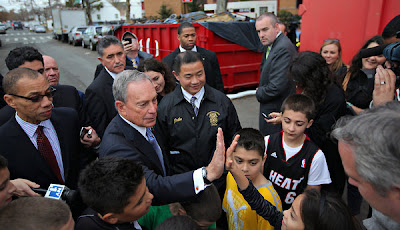 If the early days of Hurricane Sandy played to Mr. Bloomberg’s strengths — infrastructure expertise, no-nonsense crisis management — the extended and halting recovery has laid bare his limitations. After nearly 12 years of overseeing the nation’s largest municipality, he remains deeply uncomfortable with the role of consoling and soothing his city. He is rarely seen at public meeting with storm victims, and when he does interact with them, there are no tears or hugs.

While President Obama, touring the region on Thursday, embraced residents on Staten Island, Mr. Bloomberg hung back. He is more at ease in formal news briefings, where he ticks off facts about food-distribution centers and corporate donations. Asked on Tuesday to reflect on the scenes he had witnessed in the Rockaways, the mayor demurred. “We’re just going to deal with it,” he said.

Mr. Bloomberg has not been absent: since the storm hit, he has made more than a dozen visits — unannounced to the press — to hard-hit areas in Brooklyn, Queens and Staten Island, where he spoke with displaced residents. By design, the trips are kept private. Videos, edited at City Hall, are sometimes posted on a YouTube page, although often without sound, so the mayor’s conversations with residents cannot be heard.

Aides said the mayor considered it crass to expose suffering residents to scrutiny.

“His interactions with people who live in these neighborhoods are not designed for the press,” Howard Wolfson, the deputy mayor primarily responsible for fortifying Mr. Bloomberg’s legacy, said.

His aides said the mayor would ultimately be judged on how the city rebounds, not on empathy, although they are keenly aware that Mr. Bloomberg, a billionaire who urged New Yorkers to take in a Broadway show in the wake of a blizzard in 2010, is always at risk of falling into caricature — perhaps never more so than now, as he confronts a staggering crisis at the end of his final term.

“The people in this city didn’t elect Mike Bloomberg three times to give him a hug,” Mr. Wolfson said. “His focus is helping people restore their lives. That’s what he believes government is there to do.”

Great. When is he going to start doing that?

Not news why? Mike and his mini me who green lighted mega corruption revolving door of corruption and rewarded culture of failure would have to resign.

See my new youtube Jill Kelley a one woman terror org. Get in to 911 CityTime Mike Rudy.

ps I created Howard Wolfson resign blog. We r forced to pay him almost 200,000 dollars to tweet and spin and he did not even vote for Bloomberg. Wolfson deputy mayor of lies is a slimy campaign manager who loathed mike until mike bought him like a cheap piece of candy. Besides parking placard and chauffeur how is Mike funneling mula and perks - like he did to Allison Jaffin, Haggerty etc ?

Lucky Mike no actual leaders running for mayors so he can rule nyc via his puppet Christine Quinn - 4 and 5 term from golf course?

Look at him with all those bodyguard thugs.

I think its clear that city council is no longer interested in serving the needs of those who pay the taxes that support their lifestyle.

You want something done for your community? Don't ask your councilman. The are building their resume. They are (perhaps) lining their pockets.

You are an annoyance to be dealt with by either ignoring you or paying someone to slit your throat (figuratively of course) to shut you up if you are too stupid to take the hint and your assigned place.

Convince a strongman with deep pockets to adopt your community and make it part of his retainers.

You are no longer a freeman.

You are a surf.

Bloomberg is a basically a bean counter who made it very, very big!

He can only warm up to stock quotations and financial figures. Interacting with people puts him extremely ill at ease.

And, what the hell is John Liu doing at his side?
There's another bean counter for you.

Could these 2 financial "mavens" be possibly dating?

George, I've come to a conclusion.

Both "Snake (sic) Plissskin" and "Missing Foundation" have got to be the same guy posting here.

They both make the same type of spelling errors.

Der Bloomberg is colder than the fish that got washed ashore by Sandy! German Jews are rarely warm and fuzzy like Russian Jews are.

They often harbor contempt for those Jews whom they consider beneath themselves.

"But we are Germans", they cried to the Nazis, as they were herded into the railroad cars.

LOL!
You should call him Der Bumbleberg.
He f----d up NYC real good.