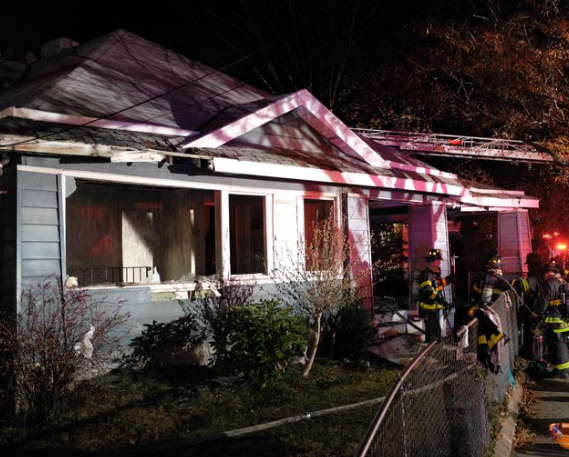 
It quickly went to two alarms.

The three victims are believed to be squatters, police and fire sources said. City Buildings Department records show complaints about squatters living in the house since at least 2016.

For years, residents in Queens had been concerned about an abandoned house in their neighborhood, telling officials the property was unsafe and had become a home for squatters.


Late Thursday, their fears were realized, after a fire ripped through the building in the St. Albans neighborhood, killing three men believed to be squatting there, police and fire officials said.

“That house was boarded up for a while,” said Assistant Chief Joseph Jardin of the Fire Department. “So I can only assume that they were living there as squatters.”

More than 100 firefighters were called to fight the blaze, which started just before midnight in the house’s basement.

While working to bring the fire under control, firefighters found all three men unconscious and unresponsive. The victims, who Chief Jardin said were between 35 and 40 years old, were pronounced dead at the scene. They have not yet been identified.

Four firefighters also suffered minor injuries, including one who fell through the house’s first floor into the basement, officials said.

The fire and a series of deaths of homeless people brought renewed attention to the worsening homelessness crisis in New York City, which has led the city to increase efforts to identify people living on the streets and steer them to shelters.

Barbra Thomas, 45, a subway station supervisor who lives in the area, said that homelessness in St. Albans had become a bigger problem over the past two years, but that she did not consider these men a nuisance.


Neighbors in St. Albans, a middle-class neighborhood, said the house had been a regular stopover for homeless people and squatters for quite some time.

“For years, it’s just been in and out, in and out,” Sulaiman Lamont, 52, said.
Linda Dey, who has lived adjacent to the burned home for 26 years, said that she had complained to city officials “several times” that the squatters next door were selling drugs.

On Thursday night, Ms. Dey had her son call 911 when they began to smell smoke.

As she and her daughter were taking photos of the damage, Ms. Dey said, “We didn’t wish bad, but we knew something bad was going to happen because no one was listening.”

I see a lot of abandoned houses, with massive plant growth and mourning cats.

An abandoned unsealed building,only a matter of time before people start hanging around or living there and it's burned down.

Exactly what happened to a perfectly nice one family around the corner from me. It took three plus years to get it rebuilt, and it did - essentially the same size, as a two fam'er. If residents don't agitate to get this addressed, constantly, this is inevitable.