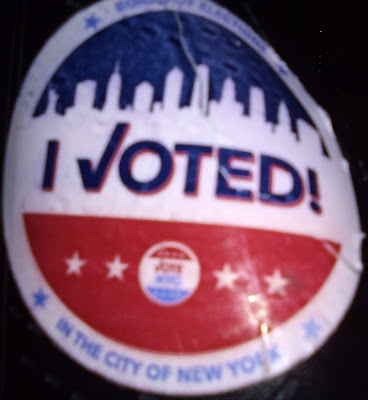 Public Advocate Jumaane Williams cruised in his bid for a full term, and Melinda Katz easily won her race for Queens District Attorney Tuesday after a slow Election Day with dismal voter turnout.

New Yorkers trickled to the polls in an off-year election in which the biggest draw might have been a ballot question that proposed a change in the way local races are decided.


Under the newly-approved plan, which will begin in 2021, voters will list candidates by preference in case no one wins a clear majority.


Among the measures supporters was Williams, who was celebrating a victory on both fronts.”


"It’s a great validation,” said Williams, who won with 77% of the vote. "People came out and their voices were heard. Over the next two years we’re going to continue our work to reshape the city.
There is so much left to do.”


Also celebrating was Katz, who is currently Queens Borough President. Her general election road to the Queens DA seat was much easier than her primary election path, which ended in a court-battle win over insurgent Tiffany Caban.


“We are an unbelievable borough,” Katz said in her victory speech. “We all want a better life for our families than we had ever dreamed for ourselves. We need to make sure there is an infrastructure of support for our young people. Young people need to know it is safer not to pick up a gun than it is to pick up a gun.”


“We are facing here an opportunity to make a national model for criminal justice reform,” Katz added. “We need to make sure we get it right here”


Early voting apparently made little difference in shaking off the indifference of New York City voters.

The recent trend of remarkably low voter turnout in the five boroughs didn’t seem to get a boost from nine days of early voting, according to figures from the city’s Board of Elections. What started out on Oct. 26 only yielded a cumulative total of 60,110 voters by the time early voting closed on Nov. 3, the Board of Elections reported.

Less than 40% of registered voters in New York City participated in the 2018 midterm elections, and just 23% turned out for the 2017 mayoral elections. Early voting is expected to help reverse the downward trend in voter turnout in the years to come.

But the program didn’t appear to make a positive impact on the 2019 race, and some recognized early on that the rollout of early voting was not without its flaws.

Mayor Bill de Blasio had called the state legislation to adopt early voting “a chance for us to reinvigorate our democracy,” at a Queens County Democrats pre-election party on Oct. 29 and touted how easy it was for to vote himself.

“I glided into my poll site in Brooklyn and I was out of there in like, five minutes, and it is going to open up a world of opportunity where a lot of people previously thought that voting was not something that they could focus on or take time for, now they’re going to have every opportunity, weekends and weekdays and all sorts of different times when they can vote,” de Blasio said.
Few New Yorkers, however, took the mayor’s advice, as the BOE data indicated.

When analyzing the city and state data, amNewYork determined that only 1.14 percent of all registered New York City voters participated in early voting across all five boroughs this year.

Will her ex and father of her children, Guardian Angel vigilante Curtis Sliwa, have a say on how the Queens DA office operates, hmmmm?

I hate this city. Can't wait to leave. If you didn't vote yesterday, go fuck yourself.

I did early voting at Queens Borough Hall, and it was quick, easy, and very overstaffed. It's a great start, and hopefully will be even more useful in the future, once they get a balanced staffing level.

Well for the most part, both Williams and Katz were basically unoppossed. There was only token opposition. God help Queens

Williams says: "Over the next two years we’re going to continue our work to reshape the city. There is so much left to do.”

If the present administration does more to "reshape the city", the mass exodus will look like a swarm of locusts flying over the desert.

How much more can they do to this city? It's already in the bottom of the bucket and when we have local 40 story prisons in our midst, homeowners will be selling everything they own at bargain-basement prices to Chinese nationals looking for green cards.

I wonder why they closed the schools for this election? As with most elections not many people voting and plenty of workers doing nothing.The early voting is stupid,the polls are open all day and night and also there's absentee voting.I was wondering if the early voting results are known before Nov.5.

Low voter turnout only increases the likelihood of candidates with radical positions being competitive in, or winning, elections.

Why don't people vote? They're too busy. Or they don't bother to keep up with what's going on. Or they're cynical enough to believe that their vote won't count. Or maybe they just don't give a shit.

For the record, I voted for the Republican. I despise Melinda Katz. Absolutely despise her. But at least she's isn't Caban. That's the only silver lining here.

Yeah...it's fucking validation that this city give zero shits about experience; about knowledge; about fairness; about anything. What exactly does the Public Advocate do? No one knows, and now they have a formal budget.

Wonder why Trump might win again? Here's the reason; full on, transparent corruption. The Democrats don't care if anyone votes as long as their candidates win...which is by default. Voters here are morons and have no idea what they're doing.

This is why the Electoral College, for President, makes sense. Morons voting for the person that they heard of or look like.

They need to make the elections on a weekend instead.

Yea, leave the city - and where in the hell are you going to? Name one part of the country that is not messed up in one way or another.

On the weekend... they did. Early Voting this year and see the poor turnout for that, too!

Elections on a weekend? So union workers have to give up a paid day off? Not bloody likely.

Now we are going to have ranked voting. Ever stand behind a moron at fast food restaurant who can’t decide what he wants? Now we will have thousands of them trying to figure out how to rank candidates. Ain’t nobody got time for that.

General elections are a complete farce in NYC. Until we have open primaries (which will never happen) most voters are excluded from the process. It will be interested to see how ranked choice voting works in the next municipal election. It's hard enough to get people to fill in an oval on the current ballot. Now they're asking people to rank their choices. And then there's the Board of Elections...the counting will be a complete sh*% show.

Anonymous said...
Yea, leave the city - and where in the hell are you going to? Name one part of the country that is not messed up in one way or another.

By the way, there our cities that have election day on Saturday, which MAKES DAMN SENSE.

True, not much of a national traveler there. Where I live they just finished paving over 90% of the streets. Replaced more than half of the fire hydrants with new ones. People live normal lives without homeless drug addicts sleeping on the street and when the electeds don't do what we want, we throw them out. Grow up New Yorkers!

>Low voter turnout only increases the likelihood of candidates with radical positions being competitive in, or winning, elections.

Ranked Choice Voting passed, which makes it harder for radicals to get elected, so that will hopefully balance itself out.


>there our cities that have election day on Saturday, which MAKES DAMN SENSE.

Great idea! In a City with a million Jews, make the elections on the one day they can't vote! That won't disenfranchise anyone!

She won’t be able to leave work
early anymore as she does as QBP.

"She won’t be able to leave work
early anymore as she does as QBP."

Please tell me who is going to stop her.

"Great idea! In a City with a million Jews, make the elections on the one day they can't vote! That won't disenfranchise anyone!"

One could argue that if secular Jews didn't vote, the city would be a much saner place...

The only downside to the idea is that Orthodox Jews couldn't vote.

Secular Jews don't care about the Sabbath, so this would only really disenfranchise right-leaning religious Jews.
Hrm, frame it that way, and certain Dems would suddenly be all in favor of Saturday voting.

❝If voting made any difference, they wouldn’t let us do it.❞ —Mark Twain

❝It’s difficult to free fools from the chains they revere.❞ —Voltaire

❝You can fool ALL of the people some of the time, and if you do it just once—it lasts four years.❞ —Alfred E. Neuman

❝It’s difficult to get a man to understand something when his salary demands that he NOT understand it.❞ —Upton Sinclair

❝The chains of habit are too light to be felt—until they are too heavy to be broken.❞ —Richard C. IRITANOD