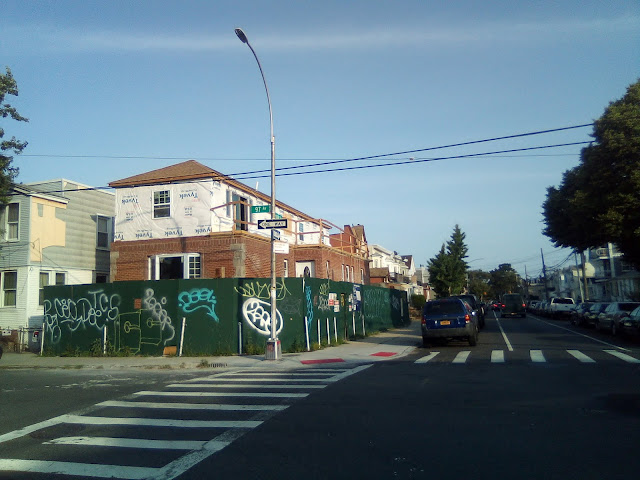 All it takes for the average New Yorker to buy a city home is a dream and 100 or more years of saving, according to a new real estate analysis.

"Homeownership is one of those classic American dreams," the analysis reads. "Though in recent years it's become just that — a dream."

ProportyClub's analysts crunched the numbers to find out how long it would take a household earning $64,000 a year — the city's median income in 2018 — to save up for a 20 percent down payment for a house, condo and coop.

While Manhattan took first place with its 122 wait for the Greenwich Village house, Brooklyn claimed four of the top five spots with a 116 years to save for a Brooklyn Heights house, 83 years saving for a Cobble Hill house, 63 years saving for a Park Slope house and 57 years waiting for a Boerum Hill House.


House-hunters without a century to spare might try Middle Village, Maspeth and Jamaica Hills in Queens or Marine Park in Brooklyn, all of which would require 14 years saving, according to the analysis.

Wife and I gave up buying a home in NYC. We decided to continue to rent an apartment in Queens. However we did end up buying a home in Sullivan County which we absolutely enjoy. The two hours to get there for the weekend is worth it. Honestly, it takes the same amount of time from Manhattan to Queens.

Paying cash for a home is the best way but it is out of reach for most regions of the U.S. !
Many people in NYC have no choise but to submitt themselves to modern day Usury.

They need to stop selling our homes to foreign investors. If they took the foreign investors out of the housing market,then prices would probably go back to somewhere around "normal". Even rent would stabilize itself because then some of the "middle incomers" would be out of the rental market to look into a home market instead. Not to mention, deporting illegals would help as well so we have more space. The government doesnt want homeownership here. The government chooses to have a rental market here so it keeps wheels in motion. Let's say if most of NYC was a home owner, there would probably be less people riding the trains and buses, the schools would be less crowded and maybe even run out of kids one day in certain areas and so on and so forth. Everything comes down to money and job security for government employees at the end.

Chinese are buying up houses in Forest Hills. It’s only a matter of time when this pristine area will look just like Flushing. They are even starting to alter the look of many house here.

I moved out of NYC recently and am loving it out of town. Part of the reason I moved was the Chinese invasion. The Chinese invasion of Queens and Brooklyn is ruining the neighborhoods. They were caught in a large co-op complex having divided up the living room with floor to ceiling curtains into several "rooms", each equipped with 3 bunkbeds stacked up, with more than a dozen 20-something Chinese living there, trying to pass themselves off as a "family". Yeah, a family of probable illegals who used the window wells of the building to store soda bottles until they redeemed them, drawing hordes of flies, drying rugs by laying them on the garden bushes, etc. A neighbor was suddenly infested with mice after 20 years without after Chinese moved into the apartment beneath her. The Chinese were propping open the locked laundry room doors so that their friends and relatives in the neighborhood could use our machines, which were cheaper to operate than the commercial laundry places--they didn't care if a criminal would use the open doors to rob (or worse) residents who came to do their laundry. Chinese can routinely be seen rummaging through private trash cans and recycling bins to find bottles to redeem and other assorted "treasure", spilling trash all over the place while they do it. A pair of Chinese men were operating an itinerant mechanics business in the street behind our building, "fixing" NYC DOT vans and disposing of hazardous materials in the street. Bicycles are now being chained up in front of yards which don't belong to those who live there, creating an unsightly nuisance. Vans owned by Chinese van drivers are taking up 2 spaces apiece where parking is very difficult to find anyway. Look at the Chinese neighborhoods--fenced in by mismatching segments of fencing, yards full of trash--to see what Queens is going to look like in a few years. When the bus stop at the corner of my street started sporting Chinese language ads, I knew it was time to leave.

Re the Chinese crapping up homes in Forest Hills-- First the Bukharians ruined the whole area North of QB with their concrete "yards" inside of stout brick enclosures and the hideous McMansions. Now come the Chinese spreading the plague of chrome railings everywhere and god knows what else... Yeah. It sucks.

If you take all your earning in cash, and pay your employees slave wages, it takes less time to save up!

The problem is home prices and tuition went up ten times from th e1970s but wage sonly seven times.

Chinese have to do SOMETHING with all those dollars we pay them for their crap.

Also, don;t forget the role of the Federal Reserve suppressing interest rates, driving home prices to the moon. People who borrow to buy at these levels will get crsuhed when the financial system fails.

Anon²: well said, and sad shameful truth. Entrenched RE interests want to turn the 99% into a permanent serfdom, bound life-long to pay by their sweat someone else for the privilege of housing. Everyday I am glad to own, even if the City is just a landlord by a different name.


Keep you racist comment to yourself. Maybe you should get a better job and buy your own house if you don't like it so much.

Anonymous said...
Chinese are buying up houses in Forest Hills. It’s only a matter of time when this pristine area will look just like Flushing. They are even starting to alter the look of many house here.

And this is not even to pay the entire cost of the house! Just the down payment.

Here kids, coming to a your neighborhood soon:

"A smart intercom company called Teman GateGuard has been pitching its surveillance technology to landlords in New York as a way to sidestep rent-control regulations in the city, according to emails reviewed by CNET.

The email's subject line says, "GateGuard: 3 Steps to de-stabilize NYC units -- even after the new law!" and opens with the sentence, "You CAN raise rents in NYC!" "

A simple fact: There can never be enough single family homes for everyone who wants one. That's why an old home on a 20 x 100 lot in North Flushing goes for almost a million. The sky is the limit

This is disheartening but not surprising. NYC just becomes less and less affordable unfortunately. I just wanted to share a saving tip for any fellow NY'ers who are looking to save on transportation. I was complaining about how much money I’ve been spending on Uber’s and a friend recommended saferides.org; it’s a non-profit and much more affordable than ride-shares. You can book rides in advance and it’s great for large groups. Just in case anyone else is tired of draining their funds with ride-sharing apps!

"They used to live on boats." like Gary Ackerman? (garygottago.tripod.com)