NYPD fraternity group parks their cars on the sidewalk adjacent to bike lane. 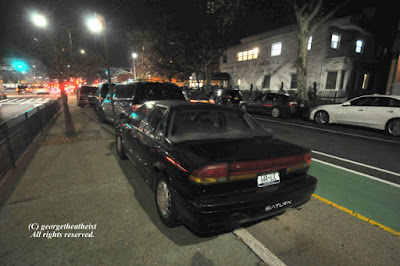 
Who:  The Columbia Association of the NYPD.
Where:  In Elmhurst on the Queens Boulevard south service road between the new Georgia Diner and Grand Avenue.
When:  Tuesday evening, November 26, 2019.
What:  Columbia Association police membership needs convenient and difficult to find on-street parking.
Why:  It seems that this membership has parking privileges that the rest of the citizenry does not.

If the Queens Boulevard bike lanes are kept clear, as seen in these photos, why can't all drivers then park on the sidewalk like these off-duty cops? 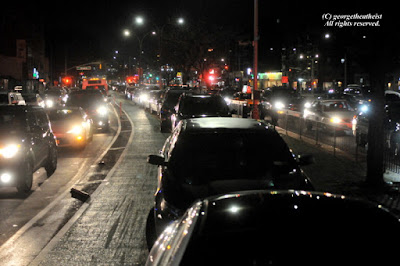 No standing, unless you're privileged 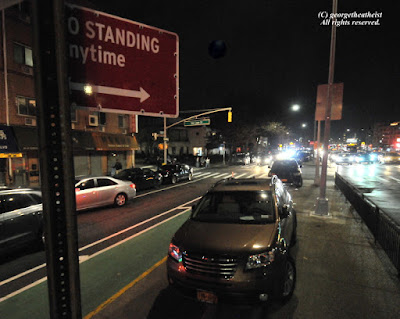 How do you know there is not an NYPD unit there. It does not have to be a PCT but a satellite office but an office that is not public information. If there is more than one NYPD car parked chances are they are working.

did you look for the Freemason symbol on it

You never heard of "police business ". Do as I say, not as I do!

Are we sure this is The Columbia Association of the NYPD or a Weight Watchers meeting?

I happen to agree, because that's where they use to park. And there was plenty of room to ride on the boulevard of death before them.

The NYPD shouldn't have done this though. And to do it on the same day City Council made it against the law to abuse placards is just one of the most obnoxious things I've ever seen. This is just throwing shit on them and but more importantly on the citizenry, because you know if anyone tried that they get ticketed and towed.

Nah, that was a bona fide Columbian police fraternal organization meeting. According to their events page on their website - HERE (which we've screen-shotted) - they meet usually at the Italian Charities building on the 4th Tuesday of each month. So, according to that, their next scheduled meeting there will be on Tuesday, December 24. Since that's Christmas eve, they might re-schedule it. In any event, pencil it into your calendars, like we did, to see if they'll be illegally parking there again 4 weeks from now.

Not only for the monthly meetings of the Columbian Association, the Italian Charities hosts a lot of events at their building: NYC official senior center activities, Alcoholics Anonymous, Defensive Driver training courses, Sicilian language lessons, educational lectures, Saturday night dances, private catered parties, etc. Anyone attending these events via car sometimes has to seemingly endlessly circle around to find legitimate on-street parking. Why is it that only members of the NYPD Columbians feel they have the right to park up on the sidewalk - all the way from the Georgia Diner to Grand Avenue no less - for their events? (Who sanctioned this?) The Columbian cops have for their transportation convenience: a subway station one block away, the Q60 bus stops in front of the building, AND there is a nifty hardly-used bicycle lane painted there for them to travel on.

We think we know the answer, no?

You think with the bike culture craze that's been going on in the past few years and bike related deaths going up this year, George's post would have got more attention. In fact there isn't a day when I go on social media and there isn't some bike advocate complaining about lane blocking and the zealots whining about the existence of cars.

But this just takes the cake.

The thing is, despite the new "law" there is a massive loophole and sadly the fraternity didn't technically do anything illegal, from the NY post story above this:

However, five council members voted against a ban on city officials parking in bike and bus lanes, at bus stops, in crosswalks, on sidewalks and in front of fire hydrants.

And there you have it, so they will park on that stretch of sidewalk again. This is your city.

I decided to do a post on it. A follower of mine called it stream of consciousness babble. Better than the indifference from the professionals

The Columbian Association members did not block the bike lane - but this, as the photos show, just by a hair; they parked up on the sidewalk to avoid doing so. (I guess they didn't want to bear the scorn of the bicycle lobbyists.) They're however guilty of parking on the sidewalk and under bright red "No Standing Anytime" signs.

With regard to the Post story: the operative words are "city officials". Members of the fraternal Columbian Association attending their private organization's monthly meeting seem not to us to be acting on official business in the capacity of "city officials". We see it as just "we're privileged" cops too lazy to find legit parking.

Hey George! Next time you need a cop, call a biker!

George your a fucking losers, it's bad enough these ckos get abused for every little thing they do like this and now your gonna do this, but I'm sure your the first to call the cops she. Your about to get slapped . . Back the Blue not shit on them assholes. .