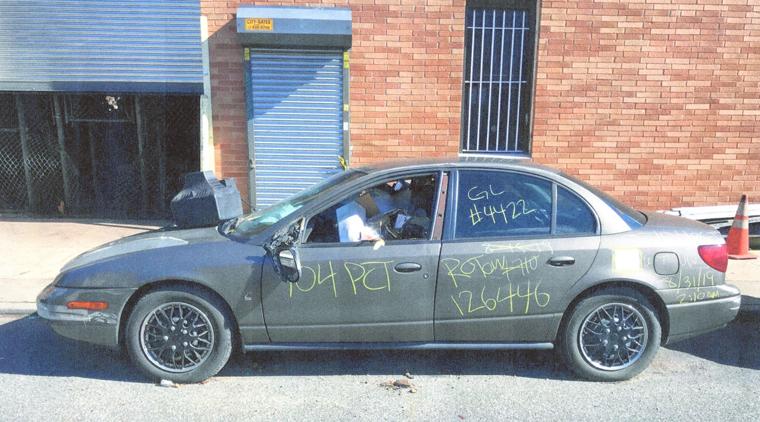 
Sitting in Middle Village on 62nd Street between Metropolitan Avenue and 62nd Road is a car that’s been in better shape. The inside’s filled with boxes, bags and old food. The driver side mirror is broken off, hanging by two wires. There was an old, broken TV sitting on the hood.

The gray Saturn has been left there for more than 60 days. And city agencies aren’t stepping up to remove it, according to an area resident who prefers to remain unidentified.

His visit to the Chronicle was prompted by an Oct. 24 article about an abandoned SUV on Woodhaven Boulevard in Rego Park that the city removed after multiple inquiries from the newspaper about it. That vehicle had sat there for more than three months.

Over in Middle Village, a Department of Sanitation employee tagged the gold Saturn for towing on the morning of Aug. 30. The matter was referred to the 104th Precinct.
Posted by JQ LLC at 2:47 PM

Go up to Costa's district in Steinway where during his last term a village of campers have taken over the streets like they have in California.

Entire blocks of streets with no cleaning - cars from Jersey are parked with leaves from several seasons piled on their hoods, flat tires, and weeds several feet high sprouted from the pavement ... on the driver's side.

He is running for Beep. ha!

The good old days are back !

There was a yellow convertible with the top down on the corner of 144th Street and the GCP Service road that was there since (at least) the start of the school year until today. I sent a 311 request 4 weeks ago. Amazing.

You need Rudy, but he ain't listening!

Amazing, when you can get towed/ticketed in less than an hour and half, some places. I the owner doesn't care to move it, just have local homeowners pitch in to pay to get it towed. The city thinks it has better things to do with your property tax dollars, anyway.

Since NYC is a shithole city and pretty much unlivable for decent humans, pour a little accelerate on it and light it.

SO HAPPY TO NOT LIVE THERE ANYMORE.

❝A bureaucrat is the most despicable of men, though he is needed as vultures are needed, but one hardly admires vultures whom bureaucrats so strangely resemble. I have yet to meet a bureaucrat who was not petty, dull, almost witless, crafty or stupid, an oppressor or a thief, a holder of little authority in which he delights, as a boy delights in possessing a vicious dog. Who can trust such creatures?❞ ―—Marcus Cicero

❝...we have an economy that, at its core, is based on death, misery and hardship. It’s not based on health and happiness and life. When it’s humming along, that means our obliteration of the planet is running full steam ahead, and average workers are being appropriately repressed and held down, hoping to collect enough food stamps to papier-mâché a cast on their broken arm. In fact, The Washington Post admitted it this week—but acted surprised when they said it: 'Many analysts pointed to a seemingly unusual cause for the turbulence: rising wages.' No, it’s not an 'unusual' cause at all. When we start doing better——when wages start going up——Wall Streeters shit themselves.❞


❝To live is the rarest thing in the world. Most people exist; that is all.❞ ―—Oscar Wilde

❝No man will be free until the last king is strangled with the entrails of the last priest.❞ ――Denis Diderot, French philosopher

I'm constantly amazed how we can get ticketed and towed for every little thing, yet every week there's another article here about abandoned cars lying untouched for months or businesses saving money by illegally parking their cars in our street parking.

A Tale of Two Cities, indeed.