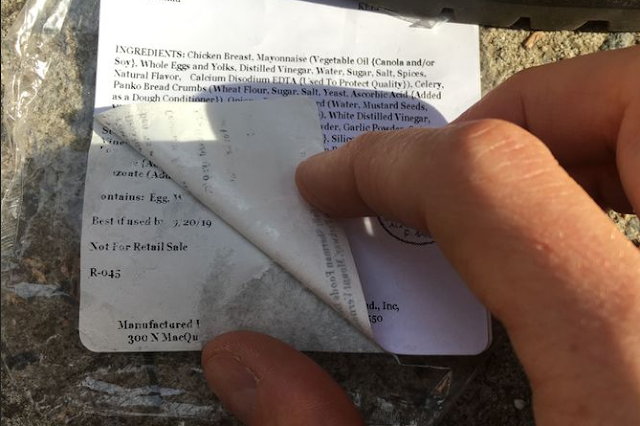 A Brooklyn homeless shelter turned into a vomitorium after at least half a dozen people ate rancid chicken salad served by the city, the Daily News has learned.

The poison poultry – which had a bogus expiration sticker — was offered for lunch at the Fort Greene Shelter on Auburn Place last Thursday.

Shelter resident Edna Smith said some of the sickening salad smelled sour, but she dug in anyway and immediately regretted it.

“All of a sudden I started to get light-headed and I started sweating,” Smith, 53, explained. The projectile vomiting came next.

At least three other people tossed their cookies after chowing down on the chicken salad – which was marked as expiring on Oct. 31.

But that date was wrong. A closer look at the empty containers revealed the original label underneath, dated Sept. 20.


“They’re giving us food that has double labels and I have the evidence," said shelter resident Pierre Landro. “This isn’t the first time this happened. This has gone on a number of times. This is unbelievable.”

The city Department of Social Services confirmed that a food vendor called Whitsons delivered expired meals to the shelter with inaccurate labels.

That salad came from Sally Sherman Food, a Mount Vernon, Westchester County based business, and the labels were switched there, according to records and city officials.

“We will not tolerate any action that puts the health and safety of families experiencing homelessness at risk and we have temporarily replaced the food provider at this shelter pending our ongoing review," a DSS spokeswoman said. "We have confirmed this was an isolated occurrence at this location and have required the provider to take immediate corrective actions and submit a quality assurance plan to ensure this doesn’t happen again.”

Whitsons won a contract with the city in a 2010 competitive bid process, authorities said.


Under the contract, Whitsons has been providing food to six shelters, at a cost of roughly $35 million since 2014, records show.


In August, the Food and Drug Administration slapped Bronx-based Whitsons with a warning letter after an inspection found “serious violations,” unsanitary conditions and the presence of the germ listeria.

Mayor de Blasio called for an investigation into how a city homeless shelter ended up serving rancid food to residents, leaving them puking poultry while callous staff allegedly laughed at their suffering.

“There has to be an investigation,” Hizzoner said Thursday, after the Daily News broke the story of the food foul-up. “There has to be a look at it to see if it’s a situation that can be resolved. But if we don’t like what we see, we’ll change vendors.”

He also expressed sympathy for the at least six victims who were served rancid chicken salad at the Fort Greene Shelter in Brooklyn on Oct. 24.

“It’s horrible,” de Blasio said at an unrelated news conference. “Thank God, as I understand it, the folks who were exposed are going to be okay.


“But no, we don’t accept that,” he continued. “Any vendor who doesn’t do their job, they’re not going to be a vendor with us.”

Yes, food poisoning is horrible Bill and you should find a new vendor. Idiot.
Posted by JQ LLC at 5:57 AM

Could be worse, remember when that maniac was carving up his victims and serving them to the homeless down in the Village? Gross!

If you want free shit, don't complain if it's expired. I'm sorry you cant get a 5 course gourmet dinner on the taxpayer dime.

You think BDB is the idiot?
How about the company who blows a $7 million a year contract trying to re-coop a few dollars that would be lost on poor supply chain management.
Oops!

It happened on Halloween thus Trick or Treat get it,also BigSlow does not fire contractor's who donate back tax taxpayer funded contract money to his political aspersions,it just doesn't happen.

Only the best, only the most corrupt.

Oh, so you just assume that the homeless will eat them, they'll eat anything?
I know what you thought! They don't have homes, they don't have jobs, what do they need the top of a muffin for? They're lucky to get the stumps.
Why don't you just drop off some chicken skins and lobster shells!