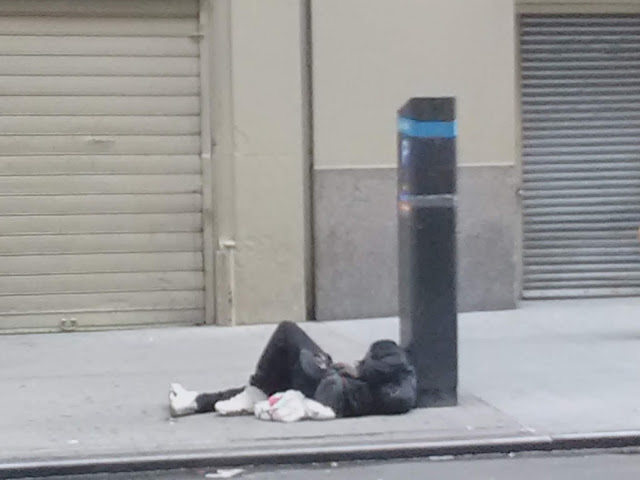 New York City will direct more than 18,000 of its municipal workers to use 311 to give social service workers real-time information to help them steer the almost 4,000 people who live on the streets into shelters.

The effort, known as Outreach NYC, is the latest attempt from Mayor Bill de Blasio to tackle perhaps the most intractable problem his administration has faced: street homelessness. The problem was highlighted in October when a homeless man, Randy Santos, allegedly bludgeoned four other homeless men to death in Chinatown.

Workers from the departments of parks, sanitation, buildings, fire and health and mental hygiene will be trained to use 311 apps to send detailed service requests to the new homeless services joint command center.

The information will help outreach workers identify the street homeless and begin the delicate and complicated work of convincing them to accept services and shelter.

The mayor has also committed $19 million to hire almost 200 new homeless outreach workers, bringing the total to close to 600.

City officials said Mr. de Blasio was committed to the strategy as a way to reduce the number of unsheltered people as he enters the last two years of his administration. Leading the effort will be Dr. Raul Perea-Henze, who will be announced on Thursday as the new deputy mayor to oversee health and human services.

“We cannot attempt to address this issue in a vacuum,” Mr. de Blasio said in a statement. “Outreach NYC is our all-hands-on-deck approach to bring even more people in off the streets.”

Mr. de Blasio has dealt with record homelessness during his six-year tenure. The approximately 4,000 street homeless represent 5 percent of the 79,000 total homeless people in the city, most of whom are in shelters. As of Tuesday, there were 60,479 people in the city’s primary shelter system, including almost 22,000 children.

Part of the issue is that many of the persistent street homeless may suffer from mental illness; Mr. de Blasio has faced regular criticism over the failure of ThriveNYC, the $1 billion plan to tackle mental health launched by his wife, Chirlane McCray, to help the most seriously mentally ill.

There are also new concerns about overpolicing of the poor, minorities and the homeless after Gov. Andrew M. Cuomo announced plans to hire 500 new police officers to help deal with homelessness and crime in the subways.


Ms. Routhier said the increase in police officers and the new outreach program would add “more points of contacts without solutions.”

“This looks like mass surveillance of homeless people,” she said.

That's because it is. The Outreach NYC program is basically de Blasio's Homeless Gestapo.
Posted by JQ LLC at 12:32 PM

NY City Employees already do not do the jobs they get salaries for and you are delusional enough to think they will do something else for free? What will their scammy unions have to say about this? These are the people who made those others homeless by their incompetence and unprofessional behavior.
Do not think for one second that HRA employees give a crap about any homeless applicant

Who is John Galt?

But that is all they want everyone to be, cadres of commie nutty organizers!

It cant work because you cant violate these peoples civil rights by locking them up removing the booze, illegal drugs and forcing them to take medication.
Shes a clueless stupid woman

The present occupant of Gotham is, without precedent, one of the most hyper-corrupt, entrenched, corporate obedient and establishment-rigged occupants of a totally disgraced City Hall (and, I am including criminal sociopaths, Rudy Giuliani, who flat lined all commerce and city nightlife, followed by Bloomberg, who murdered the entire five boroughs, altogether——right before that transient, 'Monetary Locust' bolted from Manhattan and the USA, altogether), is incapable of appointing anyone to monitor or police an entire homeless population (ironically, a population that he has willfully ignored for five-plus years, and counting), when he has ALREADY (and, SO COMPLETELY!), betrayed ALL pretense of public trust, ethics, integrity, ACCOUNTABILITY and transparency, that he and his entire cabal of intensely incompetent City Hall sycophants now DEVALUE honesty itself——to pathologically high treasonous, traitorous and tyrannical effect!——and, the ever languishing public be eternally duped, bilked, scammed and damned!

What is so insidious about de BLASS-hole's filthy, crooked and corrupt life of epic government fail, is that he and his equally crooked wife, First Liar Chirlane MacCray (not a public official, but who nevertheless acts like one when she hired two personal assistants for which YOUR tax dollars have funded (since 2014), is that everyone else who accepted bribes from 'Tall & Stupid' have already been indicted, prosecuted and on their way to federal lockup (or, very soon to be incarcerated), but NOT the kingpin himself. Likewise, it's why everyone else who've been prosecuted without government titles and preferential treatment, have been instantly remanded to jail pending their appeals. But, NOT Governor Andy Cuomo (CUOMIGULA), much less free walking Sheldon Silver AND Dean Skelos and son! But, alas, where is the outrage and pitchforks?

To restore order in any society that betrays public trust so egregiously (with impunity), a city or state government must hold themselves to a 'higher threshold' of order and conduct in order to be deemed as effective leadership that leads by example. We, the People have never HAD any such leadership, and it's once again the reason why everything below the corridors of power have devolved to government tyranny, lawlessness and outright vigilantism BECAUSE of the willful disregard that reigns unchallenged at the top of all corruption, graft and greed at its breeding point.

❝It is hard to imagine a more stupid or more dangerous way of making decisions than by putting those decisions in the hands of people who pay no price for being wrong.❞ —―Thomas Sowell

❝It is difficult to get a man to understand something, when his salary depends on his NOT understanding it.❞ —―Upton Sinclair

1. for our friend that likes extensive essays - please start your own blog where you can rant to your hearts content - people don't read these things and media that has them are considered places that cannot be taken seriously. just stop. please.

2. "begin the delicate and complicated work of convincing them to accept services and shelter"

'convincing?' WTF? yet another example of the increasing divorce that the Democratic Party has from reality.

Tax payers and citizens reign supreme - ill, lazy, or slovenly people should exist at the whim of society - if they cannot live among us, they should be coerced into an environment that forces them to lead 'normal' lives, or

if ill, provide them with the mandatory treatment needed to keep them from harming themselves and as healthy as possible - but away from the rest of us -

living rough on the cobbles is not a solution for them or society at large - but does provide make work services - which after decades of only getting worse obviously does not to help anyone - but is simply designed as an excuse to keep Democrats employed.

These misguided failed programs take a lot of taxpayer money away from useful things as infrastructure which sooner or later will have to be addressed.