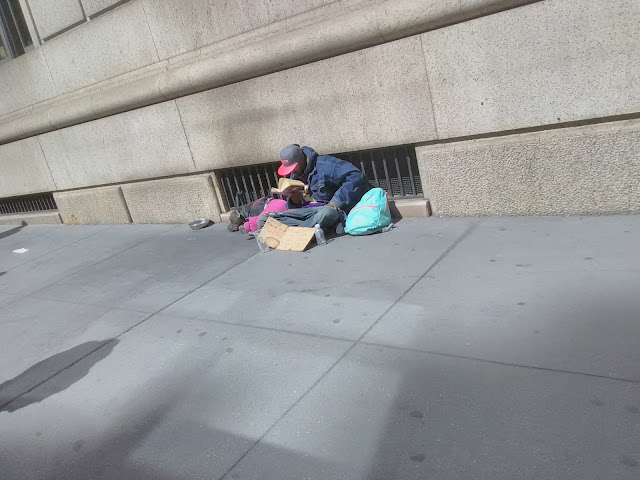 The night Jeffrey Wolford came in off the frigid sidewalk seeking warmth in Manhattan’s 30th Street Men’s Shelter last winter, it was too late to get a bed.

He was assigned a plastic chair, alongside 20 other men already dozing in the city’s biggest shelter, a major intake center for homeless people.

Just as he was nodding off, he looked down and saw a man rifling through his backpack, trying to steal his phone.

The two were wrestling on the floor when a shelter supervisor intervened. Wolford says he explained the attempted phone theft. But the supervisor told the thief to take a seat — and ordered Wolford back out into the cold.

Disgusted, he grabbed his belongings and ventured back out into the pre-dawn Arctic chill.
“Sleeping in the streets is preferable to that,” said Wolford, 33.

City Hall’s last official count in January found more than 3,500 homeless people on sidewalks or in the subways on a night when the temperature plummeted to 28 degrees.

Last week, Mayor Bill de Blasio announced plans to train 18,000 city workers to call 311 when they see a homeless person to get more folks into city shelters, which house about 60,000 New Yorkers.

“The problem here is not (that) we don’t have a place to get someone that’s safe and where we can get them mental health services and substance misuse services, we have that,” he said. “It’s getting people to come in.”

But as winter approaches, homeless people living on the streets, in interview after interview, told THE CITY they’d rather take their chances on trains or sidewalks.

The myriad dangers facing them are underscored by a recent spate of killings of homeless people. That includes the Oct. 5 beating deaths of four men sleeping on the streets of Chinatown — allegedly by a man twice arrested for committing crimes inside city shelters.

Amid this violent landscape, THE CITY zeroed in on the shelter where Wolford says he was accosted and is often cited by homeless people as a place to avoid: the 30th Street Men’s Shelter in Kips Bay.

Our review of nearly 3,000 pages of internal records of dangerous and criminal activity inside 30th Street in 2017 and 2018 found:

• Serious incidents — such as assaults, death threats and possession of significant quantities of drugs — won’t necessarily get someone arrested or even kicked out.
• Violations of shelter rules often go without punishment.
• Repeat offenders have no trouble bedding down for the night in a shelter, even after multiple incidents in various city-run facilities. That was the case with the man accused of the Chinatown killings.
Posted by JQ LLC at 7:05 AM

That is a two sided sword. Homeless tend to be schizophrenics, resulting in paranoia about living with others. I have encountered a few people on the subway who start screaming that someone is LOOKING at them. But paranoia is also the source of much crime on the grounds that "everybody else does it".

This is why we need President Bernie Sanders and his vision on housing & homelessness.

This infernal neighborhood/borough/city bickering -- on tiny details that don't change anything systemic -- has got to end.

"Tried to steal his phone?"

When I ask a person living on the streets they say they won't go to a shelter because of crime but at the monthly COMET meetings the Police give the stats for the large Pan Am shelter and very little crime is reported,which was a major concern.
Many homeless have mental problems and substance abuse issues and many have just been released from jail and don't have a family that can deal with these problems.
Giving people apartments is not the answer for some,they have serious problems and need a hospital setting,especially when they are a danger to others.That is the way it was done for years until all the mental institutions were closed. Now they are told to take the meds and be on your way.Good luck with that.

All this talk of homeless vets begs the question if all homeless re crazy, were the vets made crazy by the military or sought out for being crazy?