“Placard abuse is corruption,” Johnson told reporters ahead of the Council’s Tuesday vote. “We’ve tolerated it for years as one of those unchangeable facts in New York City, but those days are hopefully over.”

The package of bills would up the fine for illegal placard use — a rampant practice among city employees — from $250 to $500. It would require city employees to apply for placards and explain why they should be granted the permit.

The NYPD would also be required to conduct 50 targeted placard enforcement sweeps each week under the supervision of the city’s Department of Investigation.

Furthermore, city police would be tasked with maintaining an electronic database of all placards in circulation and tracking progress towards eliminating improper use of city parking permits.

Critics frequently complain the NYPD fails to crack down on placard abuse since cops are frequently spotted misusing them, but Johnson told reporters DOI’s involvement ensures NYPD will take the issue seriously.

“We wanted an outside check,” Johnson said. “Traffic enforcement agents who are supposed to be writing the summonses and tickets … don’t always do it because they are afraid of policing the police.”

Looks like someone missed a sweep on Queens Blvd on the night of the new legislation. Speaking of outside checks, how about compensating George the Atheist for his recent expose'. 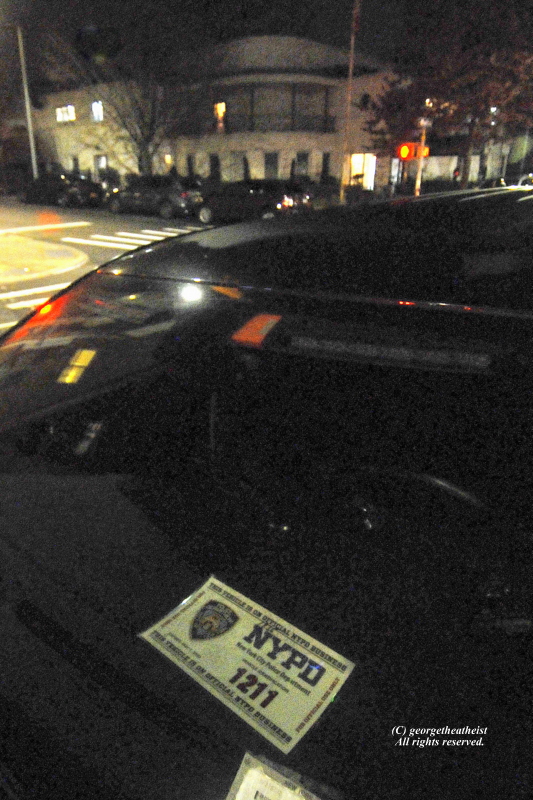 How many times a year to we hear this one? Check back with me in 2020 for an update.

There’s laws against killing someone too but sadly people do it all the time.

You see this 'news', but nothing on the incremental rollback exemptions they will quietly pass to undo the benefit from this headline grabbing 'news', which is all the real point of it.

It like those cute newsletters we get from our politician telling us they got something new, without telling you they let three things decay. But that gives them three promising headlines for future newsletters, eh?

But, hell, it gives 'tha boys' a script to follow every decade. Since you don't remember what you had for dinner last Wednesday it works every time.

So when is the crackdown going to be for the thousands of cars parked in the city without plates and with bs out of state plates?

Give all these assholes a 30 day metro card. Let them see how it really feels.

Great, there aren't enough legal parking spaces as it is, and now tens of thousands of people will be competing for the rest of us for what little parking there is.

A bill like this would be great if it went along with an increase in parking. But instead, parking spaces are being removed for unused bike lanes, unnecessary and unsightly pavement bumps into the street, or just because the mayor feels people aren't having a hard enough time driving already. This can only make an already bad situation worse.

This goes on at every fire house, police station, court house and other gov't buildings and it ain't going to change. It's always the people who feel they are so important and can't be bothered finding a legal spot or using mass transit.These people also usually park in all the places where they are creating unsafe streets.So much for Vision Zero.

You haven't heard "schmedrik" for awhile schmucks because it's "schmeNdrick".

About time corrupt politicians do something about corrupt parking placards,they've lived with it long enough,like the guy above said,make more spots available for cars with no plates,stolen plates,or paper plates no insurance,registration or inspection,for every pos car I see with 10 tickets on the windshield I see one police placard.
We will never get rid of corrupt politicians but we can get rid of placards.

Getting schooled in Yiddish spelling by an Irishwoman. I feel like a putz and a half.