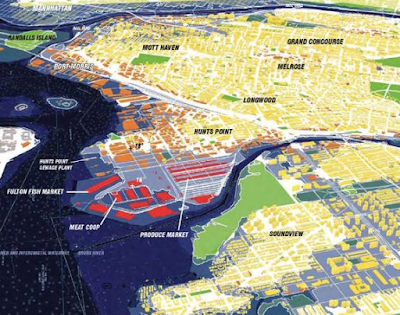 
Seven years after Superstorm Sandy, the de Blasio administration has no plans for coastal flooding defense measures to protect the city’s largest food market — a $3 billion hub that sits on a low-lying peninsula in The Bronx.

The Hunts Point Food Distribution Center — home to 8,500 workers at 115 companies that are anchored by three sprawling markets for meat, produce and fish — only avoided damage from flooding in October 2012 because the storm surge arrived at low tide, residents and advocates say.

In 2013, officials in the administration of then-Mayor Michael Bloomberg identified an “integrated flood protection system” for Hunts Point among its preferred resiliency projects for the city.
Years later, city officials have moved forward on just one of the two resiliency projects proposed in 2015 as priorities for Hunts Point by an advisory group of neighborhood residents, business owners and advocates.

The plan underway, part of a federal competition known as Rebuild By Design, dedicates $71 million for food hub electricity independence, to protect against sustained power outages. It will also bring solar power and energy storage to two nearby public schools, allowing them to serve as emergency shelters.

While residents and advocates support that effort, they say their bigger priority has been coastal flooding protections for an industrial area that distributes food to 22 million residents in the region.

The city Economic Development Corporation’s only gesture on that front has been a verbal commitment to making the vital components of the meat market and two other buildings better able to withstand flood waters — a process called “hardening.” But no funding has been allocated thus far.

“That is absolutely the lowest hanging fruit… and we were just horribly disappointed,” said Annel Hernandez, associate director of NYC Environmental Justice Alliance, which participated in the advisory group sessions. “To date there has been no commitment for an investment toward construction of actual coastal resiliency.”
EDC officials maintain that their work with the community has been collaborative and transparent, and they say the current strategy focusing on energy resiliency and “building hardening” was spurred by available funding, cost-benefit analyses and community priorities.

“The industrial area and specifically, three buildings in the Hunts Point Food Distribution Center are vulnerable to coastal flooding. Many of the other industrial buildings are already elevated or have loading docks that put critical uses out of the flood plain,” said EDC spokesperson Shavone Williams.

“The city will continue to work with tenants within the FDC as we look at future modernizations and/or redevelopments to identify opportunities to make facilities that face flood risk more resilient and further protect NYC’s food supply.”

Maybe the EDC would see the severity of this issue and the vulnerability of the area if there were plans to build luxury towers by there.

I knew it made no sense when, back in the 90s, they moved everything from lower Manhattan to Hunts Point. Now 20 years later they're crying the blues.

Not to worry, the Market, as is Rikers and someday the Airport and power plants will be gone replaced by the Inner Sound, the exclusive waterfront community of late 21st Century NY between Hunts Point and Flushing Bay .. and the Hell Gate.

Flood barriers like they have for London or the Netherlands will be built at Whitestone and the Narrows.