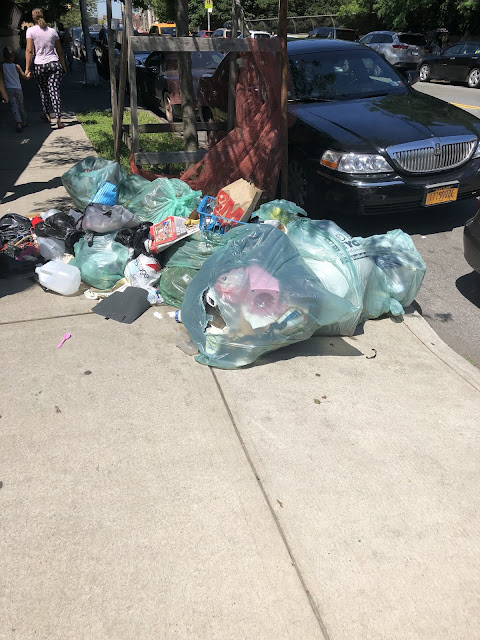 Behold, Mount Craphurst! It gets bigger by the minute. Wanna see it in person? Come to Woodside Avenue and 73rd Street.

This pile has been here for at least a month! The city gives zero fucks. Seriously, Sanitation collects from this same block twice a week and the DSNY inspectors drive around constantly.

Some neighbors who met this lady actually escorted her to the pile, and she declared that yes indeed, rats might be drawn to such a mess. But why bother dealing with it?

Guess what? I myself have spotted 3 rats running down Woodside Ave near the pile since it started forming. Isn’t that surprising? No??

Originally it started as a bag or two, on the railroad overpass. Then, it migrated a few feet over to the current location, a construction site. And it grew and grew and grew....

Notice the green bags (with rat holes) that encapsulate some of the litter. These bags are a new (~a week) development. I guess someone bagged up the trash, hoping to make it easier for collection.

What did we Queens residents do to deserve this treatment?

Welcome to Queens, the borough of nobody-gives-a-fuck.

Anonymous Crazy Lady
Posted by JQ LLC at 8:38 AM


Raleigh NC has underground trash. Europe had it decades ago. When will we wake up.

Hey, the Post just ran a story today about some African coming off a plane in Chicago with 32 lbs. of rat meat. Sadly, the authorities confiscated and destroyed his special treat. You should look this guy up and point out this fresh new supply of goodies, and I bet he'd get right to work getting his latest BBQ fare.

Too overcrowded anymore. I remember back in the day in queens, rats were hardly ever seen. There was no rat infestations like you see today. The only time I would ever see rats was in the subways and now it's not uncommon to see them in flushing and other heavily populated areas. Even in bayside, I have been seeing rats here. Overpopulation brings alot of problems.

Before plastic bags garbage had to be in a trash can with a lid.Rats,racoons,dogs,cats and even birds rip bags apart as well as people looking for cans and bottles.No more plastic bags for household food waste put it in the recycle bin.

Update: the very day I sent QueensCrap this email and picture, I also emailed it to Danny Dromm’s office, and the pile was picked up the next day. I don’t know if it was Dromm’s office that handled this- if so, thank you!!! And thank you to the DSNY workers who had to physically deal with this nastiness. I’m just really angry at the inspectors who drive by all the time and have passed this pile for a month without noticing it (???), and the city rat inspector lady who walks up and down the block ticketing ppl for not having proper garbage receptacles yet did not call in this pile, as well as the ppl who walked by it every day without calling it in (including me- it took me weeks to call it in, because i was too lazy, and also I stupidly assumed someone else had called it in already). I’d better start calling about the next Avenue, where there is a mattress, a full dining room set, and bags of loose clothes (maybe it’s not just dumping- maybe someone airb&b-Ed the sidewalk?).

We have Rats in Whitestone too they run all along Utopia Parkway comming from the shore.
The Jetties are invested along the Queens North Shore. Little Bay Park is Rat invested I see them all the time. Let's hope the Hawks eat them because NYC is doing nothing to control the investation!

Much obliged and glad to be of service, but I am sure that won't be the last heap of trash left behind for a month.

Apologies for posting it late, I was getting error messages trying to upload it

Anonymous Crazy Lady- you go girl! One less heap o’garbage in Woodside
ACL doing more than AOC for her district

The Jetties
Swarms of Turkey Buzzards are all over the N Shore.
They are big, stupid, lazy and lousy hunters that only eat already dead things.
--They love tearing up garbage bags, even pick them up sometimes and bring them to the shore smashing the bags along jetty's and rocks.

I never seen these before, huge black birds with red turkey shaped heads.
Wingspans wider then car's
--ugly bastards too!

Yeah, but the shore rats are big water rats.
Mention them on the Whitestone facebook page and you get banished.

They cant poison the rats because it will endanger the federally protected Turkey Head Buzzards making a comeback feasting on all the garbage. These things can see at night, and smell dead things a mile away.
The city need to fix the garbage problem or let the people shoot that rats with BB Guns and the Turkey Heads will do the rest.

Do not approach Turkey Heads they are loaded with germs, stink worse then rotting corpse, skunk and shit put together. They also fly spit and defecate at you for defense.

Everytime I go get a bacon egg and cheese an arizona and a salad I cant find any garbage cans around and I toss it in this lump of garbage. Watch out for youre dog these rats will try to bite and molest you.