Congresswoman Ocasio-Cortez has to fire her chief of staff 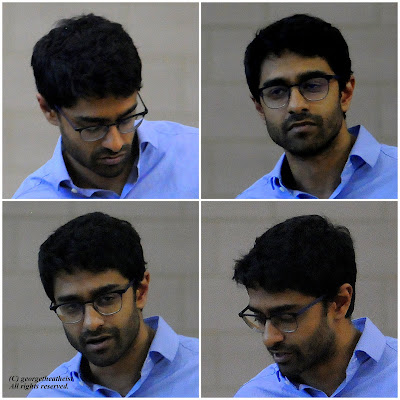 So why is her Chief-of-Staff, Saikat Chakrabarti, mouthing off for her?  Referring to moderate members of Democratic groups in a Tweet last month as "New Southern Democrats" who are "hell bent to do black and brown people today what the old Southern Democrats did in the 40s."   He sure p.o.'d Pelosi and many of the old school Dems, no?

Who elected this guy Chakrabarti? Seemingly the puppet-master of Ocasio?   AOC's string-puller?  And he doesn't even live in Queens but is a carpetbagger from Greenwich Village in Manhattan!!!

A few weeks ago on the heels of the congressional hearings of the Senate's border funding bill, a brash man in his 30's  decided to take to social media and rail against the establishment very old guard and "moderate" Democrats for their support of it. And the social media storm came from the chief of staff of the most pop-centric elected official of our time (and arguably maybe all time since the young Kennedys) Alexandria Ocasio-Cortez, Saikat Chakrabarti. Although he made salient points about the congressional hacks constant cave-ins, he made a boneheaded analogy comparing Speaker Pelosi and the other Dems voting for it to the Dixiecrats of nearly a century ago, which he immediately deleted.


Even though these are atypical reactions from an electorate body of officials that are cognizant of their weakening status in office and of the growing and widening disdain of them by their constituencies to undermine a young and immensely popular upstart like Ocasio-Cortez, their vindictive accusations of her being dependent on her obnoxious chief of staff does have merit.

But in actuality, it's not only because of his tweet conflating the current shitty Congress and the shitty racist enabling one back in the day or even wearing a very stupid t-shirt, it's mostly because he's a dishonest person and a multi-millionaire feigning to be a revolutionary, trying to become a player in D.C.. He also could have underhanded reasons to personally profit from what on the surface are progressive policies that are being pushed.

Chakrabarti, or Chak as he will be referred to here for the sake of brevity and it sounds better, got filthy rich in Silicon Valley developing a web tool called Mockingbird and participated in Bernie Sanders miraculous yet defeated presidential campaign, followed by hooking up with the current representative of New York's fighting fourteenth district in Northeast Queens and the South Bronx with the Justice Democrats PAC he co-formed.

But since that victory, he's been pulling some very shady and non-progressive stunts
Posted by JQ LLC at 2:49 PM

I am not sure she could function without him. It's not as if she was killing it before they met. 29 years old, college graduate, professional bartender.

He is certainly the brains behind the victory and social presence.

Re: "I am not sure she could function without him. It's not as if she was killing it before they met. 29 years old, college graduate, professional bartender"

Naureen should be fired. She dies respond to constituents ' voicemail. AOC can't fire Sakat. He is the puppet master and AOC is his empty vessel

Chakrabati is Bengali, the most leftist part of India because of monsoons and 1947 transfers

This isn't an accident, this is intentional. Chakrabarti says this stuff for the exact same reason Trump says all sorts of absurd and dickish things - it fires up the base.

Sandberns were all over Flushing's Lippman plaza with their table.

What ever you say about AOC nothing was worse than the gang of p*xks running this boro now.

We need more of her.

"Some veteran members of the Congressional Black Caucus railed against Justice Democrats — and by implication, Ms. Ocasio-Cortez and her chief of staff, Mr. Chakrabarti, who founded it — in an article in The Hill newspaper.

AOC is an actress from Westchester, nothing more.

Chakrabati came up with the campaign, including to farcical "Touch Chic from the Bronx" nonsense. Without him, she's just Dan Quayle in a dress.

Your site is amateurish.

No semicolon after the salutation. The correct punctuation would have been a colon.

Nothing will be different.