After being opaque about the cause of Saturday's blackout, Con Ed is being glib about potential blackouts


Con Edison warned Monday that New Yorkers may have to endure another blackout this weekend, when the temperature is expected to reach a sweltering 97 degrees — and feel like 106.

“We expect that there could be service outages — those things happen during heat waves,” company spokesman Mike Clendenin said.

Later in the day, Con Ed further fueled fears of a potential power outage when it completely backtracked and blamed a fault in a 13,000-volt power cable that caught fire for triggering Saturday’s blackout.

On Sunday, company President Timothy Cawley had called the idea of tying the incident to the failed cable “sort of a non-starter.”

AccuWeather predicted four straight days of 90-plus degree temperatures beginning Friday, with a 97-degree peak on Saturday, when humidity and other factors will make it feel even worse.

Surely, these things happen and will continue to happen when you have energy devouring billboards like the new ones in Times Square that are about 3, 5 and 20 stories and are a block wide. And also deriving from massive tower development by the Hudson, particularly the brand new Hudson Yards.

How is Con Ed going to handle Google's expansion and Disney's new studios on Soho's west side?

Maybe this is why they are being glib. Con Ed's VP for "government relations" used to work for the city's Economic Development Coporation. (Thanks to Kristin Theodos) 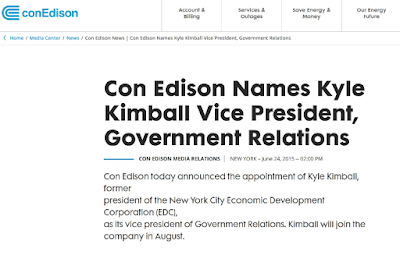 Green New Deal baby. Just a preview of the rolling black outs. Close Indian Point, no new LNG pipelines. Don’t worry will get the power from the wind mills we haven’t built yet!

Meanwhile an elected dope from da Bronx is inciting domestic terrorist attacks against Federal Agents. Using rhetoric to convince weak minded individuals that the US running concentration camps on the southern border.

Sure, take energy responsibilities away from Con Ed and give it to...

Look there is one route to all our problems - you do not give the job based on ability. Like the former Soviet Union you give a job to a person that has the 'right' qualifications - as defined by the Party (and we all know what that is) ... so you get 3rd World Service.

That was likely a Cyber attack dry run.
This because all that "new and improved" shit runs of networked computers from the local sub stations and relay blocks to as far away as Canada.
Assume once again software code writing was likely farmed out to more $9 and hour code writers in India.
Remember what the fools at Boing did and don't assume the greedy bastards at Con Ed, National Grid and Mowhawk in Canada were any different.
If holes & exploits exist it could take months to find them let alone fix them to get such a massive amount of hardware and power distribution running properly and securely.

If so, the next attack is likely to be huge. Be prepped just in case because the cops & fire department will be overwhelmed and wont be around to protect your family, businesses and homes.

Con Ed and its "mouthpieces" are fulla shit! A 13,000-volt primary power cable doesn't overheat to the point of glowing without such a current overload going undetected. Several other very serious things are wrong.

Hahahaa, Is this Alexa Cortez?
Where do you buy such magic Solar panel's to stick on the average roof?
The same place Jack bought his beanstalk seeds?
You could do a single small bedroom 5000 BTU AC or 300SQ ft studio with six 4X8 foot panels in full sunlight but that's about it.

A home would need a 1/2 acre of satellite grade panel's to generate 240 volts at 15 amps AC (around 3000 watts) to power a 220,000 BTU central home AC compressor and blower. Approximately the square foot size of the panel's on the ISS space station. (and keep in mind that space station orbits in night half the time)
This not even getting into the 3 kilowatt minimum battery and DC to AC inverter.
You need about 5+ million dollars and a 1/2 acre unobstructed field laying around.

The number of tin foil hat wearing commenters on QC is astounding.
Thanks for keeping the blog alive.

Well, if you are schizophrenic, tin foil hats help a lot. You see schizophrenia is all about the brain misfiring randomly, stimulating bizarre combinations of thoughts and memories, so just about any interference can set it off and therefore keeping that interference away helps a lot. We shoul dput tin foil hats on all the homeless!

Your data on solar panels is fifty years old. They are twenty times better now.

Nope, you can change the laws of physic's.
You only have X amount of photons in a square foot of sunlight that can be converted to electricity. Todays best of the best solar can only hit somewhere between 20% and 23% efficiency. The world record world record of 28% efficiency uses a perovskite-silicon tandem solar cell. --Not much of an improvement over the past 20 years

Here try to lern yourself something and stop listening to green heads and tin hats like Alexa Cortez, the technology is simply not here yet and its a LONG LONG way off
Link:
https://www.nanalyze.com/2019/04/most-efficient-solar-cell/