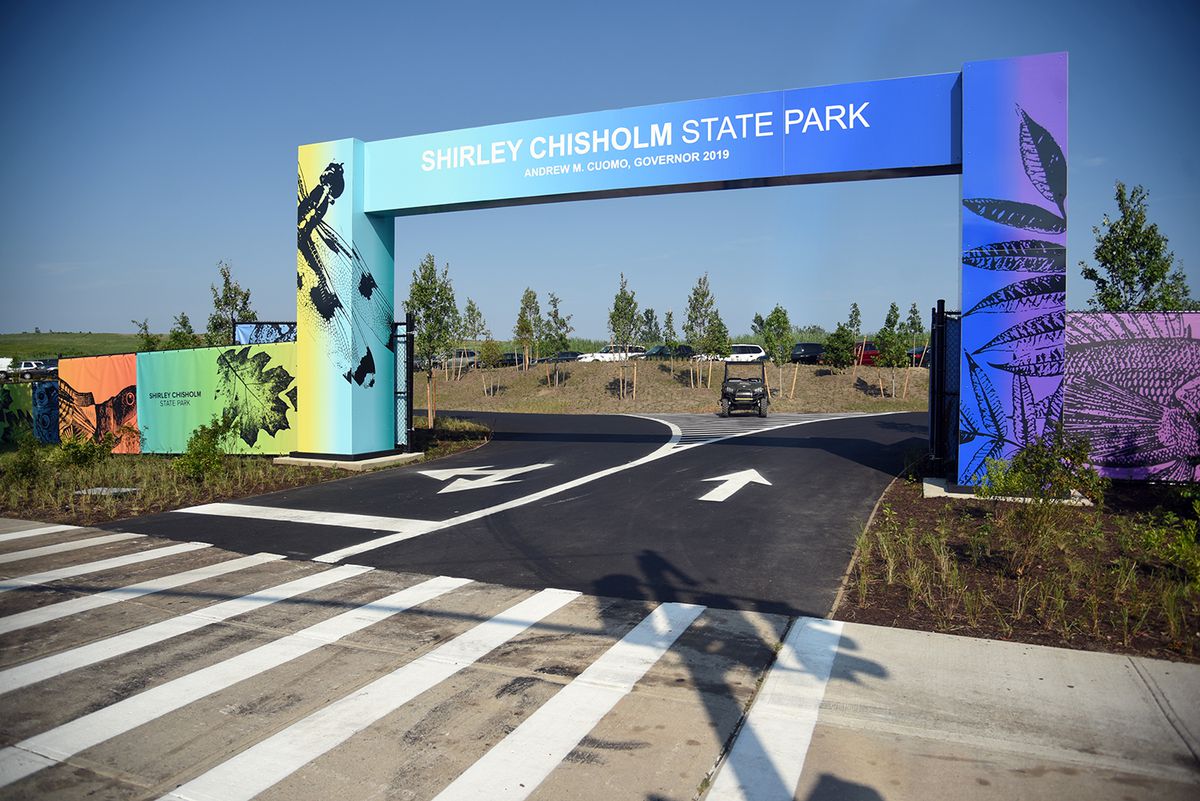 
After 70 years of promises, Brooklyn’s newest waterfront park is finally open for visitors.

The first section of Shirley Chisholm State Park recently made its official debut on a site that was previously known as the 110-acre Pennsylvania Avenue Landfill. Situated on the northern coast of Jamaica Bay in East New York, near Starrett City, this vibrant new green space has opened up the shoreline here for the first time in generations.

The words “charming” and “fun” don’t often come to mind when walking around New York City’s polluted landfills. Yet somehow, a walk through this new park is just that—a surprisingly enjoyable ramble through a delightfully varied landscape of wildflower meadows, native grasslands, hidden beaches, and bustling fishing piers. Butterflies and songbirds fill the air, while cooling breezes waft in from Jamaica Bay.

Though it has only been open for a week, the park is already a hit with the neighborhood. During its first weekend, the parking lot was filled to capacity and every two-wheeler was checked out of its Bike Library, which is run by Recycle-A-Bicycle. Parents pushed baby strollers along meandering gravel hiking trails, while fishermen lined the piers along Jamaica Bay, happily pulling in dozens of porgies.

The second section of this park, at the adjoining Fountain Avenue Landfill, won’t be complete until 2021, but for a community that has been cut off from the waterfront for decades, any access to the water is no small thing. “I’ve been waiting for this for 20 or 30 years,” said one fisherman, as he cast out into the waters of Jamaica Bay. “I moved here in 1986, and they were working on it then, piece by piece, off and on, over the years.”
Posted by JQ LLC at 6:57 AM

Leatherface, the Spawn of Mario, get Best Supporting Actor award. Brilliant political move to get the black vote, no?

Shirley Chisholm, who the hell is that to get a state monument, bridge or park named?Mt.Koch, Mt.Dinkens or Mt.Bloomberg be much more appropriate ?

Why would Shirley Chisholm rate a state park named after her, other than shameless political pandering to the black vote?

Isn't this where the mafia used to dump their bodies?

Yes, that and the other garbage mountain off Long Beach Blvd, Island Park.
The Italians out there don't talk about it and never use that "M" word.
Tell ya one thing: Home invasions, garbage & rat problems, neglect, robbery people selling out homes to pieces of shit (democrats included) don't happen in Island Park. --Its not allowed.

Seems plenty notable and worthy to me.