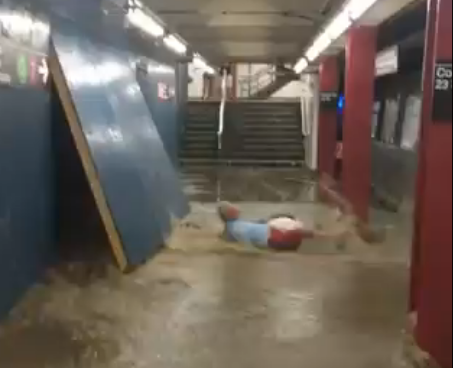 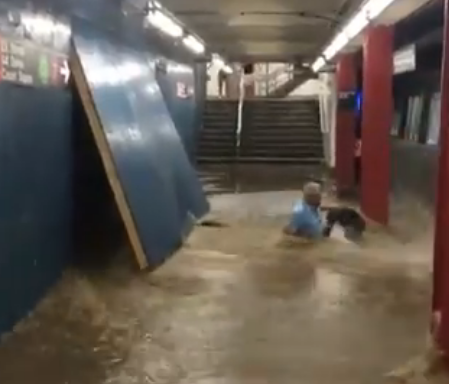 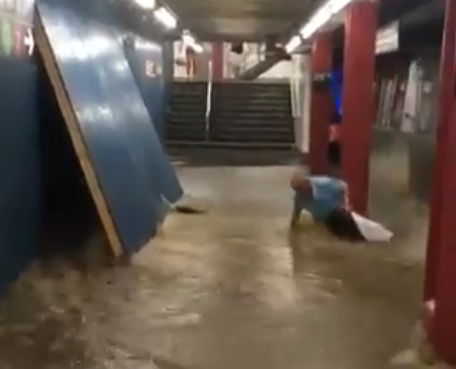 Ok this one is scary. Wall gave out last night during a rush of water while a train was coming and took someone out #subwaycreatures pic.twitter.com/WtzgY1FuWv
— Rick (@SubwayCreatures) July 18, 2019

In a lengthy statement, MTA spokesperson Shams Tarek blamed the flooding on a "shocking lapse" by contractors working for a nearby private development, which is also building a new entrance and elevator at the Court Square Station. The property is luxury condo Skyline Tower, soon to be the tallest skyscraper in Long Island City, and developed by United Construction & Development Group.

The building did not have the proper pumping system in place during the storm, Tarek said, leading to the "absolutely unacceptable and avoidable incident."


"Their worksite was inundated with rainwater during severe thunderstorms, causing water to build upat their worksite and breach plywood separating their worksite from the station," according to the MTA's investigation. There were no reported injuries as a result of the breach.

This is the thing that commuters have to sacrifice their safety on the subway for: 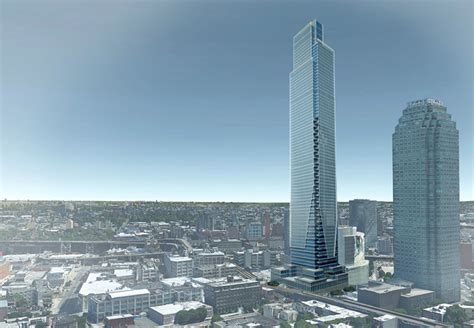 Hey, forget the bikes, now we can swim to work.

If the contractors cheaped out on this, what else is wrong with that building because of stingy and incompetent contractors? How do we know the whole building won't collapse or fall apart in a few years?

That’s a gorgeous building! What idiot goes down into the subway during a monsoon? Must be a tourist.

Don't need to swim, Guvner Como can offer a contract to Rye Playland or Six Flags for those flume logs.

I am just an admin. No one pays me to go out and find sources, I just copy and paste. Its the corporate news media not doing it's job and it's an outrage because you will only see repeated plays of this viral video a million times over instead of a gaggle of reporters hounding the developers and contractors and also the city Department of Buildings who allowed this mess to happen.

The MTA deferring responsibility again is not a fucking surprise. Just like with the poison ivy.

I think this is fake news.


1. Reported as flash flood in other media, nothing to do with retaining barrier.

2. Is a private company allowed to put construction IN a station? Wasn't it inspected?

What fun! I'm sorry now that I left such a wonderful town. We just don't know how to have a good time where I live now. Someday, when I return for a visit I'd like to go on the sluice ride, myself. Great place, NYC, like an adult Disney World.

So to beg the question: what kind of millenial
freak would rather video this rather than run to help?