Is the Shel game over? 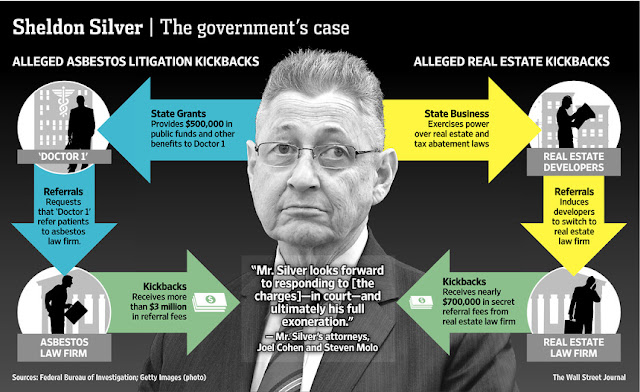 The ex-speaker of the New York state Assembly Sheldon Silver was found guilty on Friday of selling his office for $4 million in kickbacks — affirming a 2015 conviction on the same charges that had been overturned on appeal.

A jury of seven women and five men found Silver, 74, guilty of all seven counts against him, including two counts of honest services mail fraud and money laundering.

He faces as much as 130 years in prison when sentenced on July 13.
Posted by Queens Crapper at 6:36 AM

Let's not be too hasty here. He will appeal again. What happened to his Albany partner who was up to no good giving his own son a free job? Lock them all up.

Good riddance to a pure evil scourge. What was great about his ending is that he clammed up in the final two days of his hearing. This conviction should send douche chills to every other elected fiend abusing and profiting financially and influentially in his or her position.

I am looking at you mr. mayor and your foul aides, you too governor.

I would predict minimal to no jail time. He would play the 'old and sick' card. No judge would put him in jail. Too many long memories from his friends.

Do you know how they bribe the churches, with "faith based" grants ostensibly for child, elder, drug and alcohol care? This is why they then keep their flocks un-Englished, voter un-registered, and un-citizens. They com eout to scream on cue, they count in the census for redistricting, but they won't vote. Perfect scam.

I love the graphic. You could really caption it: 'Who me?'

That filthy scumbag is appealing——the last act of contempt against EVERY law abiding, oppressed, taxpaying citizen of New York State, by this totally corrupt, dishonest, dishonorable, disloyal and disgraced coward whose government, cradle-to-grave income is based on lying, cheating and stealing——and, the ever languishing public be damned (again and STILL).

If Silver's and Cuomo's arrogant power grab were weaved into a sequel to 'The Godfather,' then there would have to be TWO Fredos to betray public trust with impunity!

But, when will the third and final dethroned king of Albany be indicted, prosecuted, found guilty and sentenced to lockup for life, I shouldn't wonder, when so far there is NO ONE in jail (except for Anthony Weiner, Ruben Wills, Celia Dosamantes and Bernie Madoff——and, the only reason that Madoff is in jail because he stole from the obscene, kleptocratic wealthy)!

❝The brilliance of Bill Clinton was that he transformed the Democratic Party into the Republic Party, and he pushed the Republican Party so far to the right—that it became insane.❞ —Gore Vidal

He'll get a slap on the wrist and an ankle bracelet because he can. Dollars to donuts?

Good!
Not so nice...
so they convicted him twice!

I’m surprised he didn’t wear black suit with a white shirt and no tie.

I'm betting he won't see the inside of a cell anytime soon...

hopefully he dies while in prison

What did his office ever do for constituents? If you have contacted one of your elected officials for help with a serious problem, you do know what I am talking about. After many tries which took weeks to get through to a constituent's representative, I've been told they are busy helping other people, they're spending too much time with me and then, the best, hanging up on me. I was in a local council member's office and was told they have to help some one else. I watched as the large alien immigrant family was ushered into an office, a privilege I never got. Why are our elected politicians in Queens so busy with illegal aliens and meeting their needs, when citizens don't get the time of day from the people that they voted in?

This is the real crime. It's an invasion and we are paying for it with our taxes. We don't get services, we don't get the government benefits that illegal aliens get and when we need help, it's never from our elected politicians.

That Rough-neck haircut finally did him in!

>I was in a local council member's office and was told they have to help some one else. I watched as the large alien immigrant family was ushered into an office, a privilege I never got.

Hard to believe that an elected would go out of their way for people who can't vote.

Anonymous said... "I was in a local council member's office and was told they have to help someone else. I watched as the large alien immigrant family was ushered into an office, a privilege I never got. Hard to believe that an elected would go out of their way for people who can't vote."

*************
And as far as voting goes: California allows illegals to vote if they have a driver's license. What do you think DuhBlazio is planning with these NYC ID cards for "all non-citizen immigrants" documented or otherwise? An ID card is proof of residency and then you can get a driver's license. Great way to expand the voting roles. Cool.

This situation has spread to doctor's offices, too. My GP of 20 years has made me wait for 30-60 minutes past my appointment time to accommodate "large alien immigrant families" who can't go to the doctor without Mama, Papa, Daughter, Son and their Health Aids. They are afforded 60 minutes and sometimes more. Why not? It's a business. Besides Mama and Papa, Son and Daughter and their potential progeny are all potential patients. Them 6, me 1.
My appointment letter states that my time is only 15 minutes and I'm lucky he takes my blood pressure and listens to my lungs then enters all my vitals while looking at a computer screen.
Needless to say, I don't appreciate waiting an hour for a 15-minute appointment.
And, needless to say, I don't use this doctor anymore. I found one without a computer.
My NEW doctor now questions me while looking in my face, not the computer screen.

>And, needless to say, I don't use this doctor anymore. I found one without a computer.

Isn't that illegal now? All medical records have to be computerized, accessible online to the government and hackers, "for out protection".

He was a scourge on NY state.... his arrogance was like none that I have ever seen... he held most people in contempt and only helped out his own kind.... sleazy filthy swine... and all his supporters too

Anonymous said: "Isn't that illegal now? All medical records have to be computerized, accessible online to the government and hackers, "for our protection".

**********
No. It is still legal if you are a single practitioner and if you keep paper files on your patients. I emphatically agree with you that being computerized does leave us open to hackers -- government and otherwise.
I make sure to get a printout of every visit and confirmation of payment to my doctor from my HMO. You can find one in your neighborhood who has hospital privileges but not a member of any hospital group like NYU or Mt.Sinai, etc.
He's an older, single practitioner who is not a pill pusher and has seen it all. I can ask him any kind of question concerning my health. My other doctor always pooh, poohed me and would never give me a satisfactory answer. My new doctor never treats me with condescension and to be taken seriously is "priceless."