Lots of dough thrown down the homeless hole 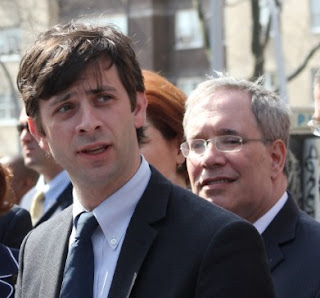 It costs a lot of money to keep the homeless shelter system's population flat.

Both the City Council and Controller Scott Stringer questioned the precipitously rising budget for the Department of Homeless Services Tuesday, even as the homeless population of about 61,000 New Yorkers has yet to drop.

Councilman Steve Levin said that actual spending for the Department of Homeless Services was $1.4 billion in fiscal year 2016 — and had grown to $2.14 billion in the current fiscal year, after the city twice modified the budget mid-year, twice, to add cash. That's a $700 million jump.

"But we have not seen a significant decrease in the shelter census despite that increase in spending — 50% over what it was in fiscal year 2016," Levin said during a City Council budget hearing on the budgets of the city's welfare agencies.

Levin said the spending was worthy — and that the city had underfunded the system in the past. But he questioned what results the money was getting if the city had the same shelter population — and if those in shelter were still unhappy with conditions.

Simple: hotel rates went up.
Posted by Queens Crapper at 12:48 AM

Math.
The city's budget for homeless services is 2.14 Billion dollars.
2.14 billion divided by 61,000 - or $35,081 a person per annum.
35,081 divided by 12 - that $2,923 a month.
seems to me that this number is awfully close to what the Mayor defines as "affordable." I don't pay this much in rent, do you? At that number, we can just rent these folks some pretty sweet apartments. Of course, the 2.14 billion number included the City bureacracy. The Homeless Industrial Complex, if you would.

The shelter population is never going to go down when you offer it to everyone, even the illegals. Especially when you give every service and free benefit under the sun to them.

Crappy, the per diem rates for hotel emergency shelters are fixed by the state, and I don't think they rose significantly. The real cause is probably the amount the city has to rely on them, because we lack the space in the long term shelters, and there simply isn't adequate apartment capacity at rates the people in the shelters can afford.

Yes house pepole who don't even belong here. Why don't we spend that money to send them back to their proper state of origin or country of origin? Why does NYC have to take in every homeless person from all over? I'm telling you, I need to quit my job and become "homeless", I would make out better that way. People who work and live in NYC are suckers.

These billions could have built buildings for actual affordable housing and vouchers for these homeless people and also lower-salaried and retired senior citizens getting phased out of their towns but instead hoteliers and "non"-profit charities are getting rich instead. This is a scandal of a high order and no one, especially the pathetic local news media, is saying a god damn thing about it.

WE SHOULD BRING BACK BLOOMBERG'S PLAN OF HANDING OUT BUS AND TRAIN TICKETS SO THAT THEY COULD GO BACK TO WHERE THEY CAME FROM !!

It ain't workin' !
Get a new system.
Oops....wait a minute...my bad....me dumb!
SUPPLIES for these shelters.....which politicians' friends have the contracts to supply them?
BINGO!

Until the city rescinds the "Right to Shelter Law," the homeless population will continue to rise. People come from many other states to get free shelter and free food vouchers. Homelessness has become a business. The hotel industry is booming and hotels are being built all the time -- to house the homeless. I feel bad for the tourists, who pay top dollar for a hotel room and to find out there are many homeless residing there clogging the lobbies and corridors. The middle class has had enough and are heading for the exits. Can't blame them. DeBlasio just throws money at every problem and the taxpayers are left holding the bag. Maybe the city should just buy every homeless person a tiny home. I bet it would be cheaper in the long run.

Newtown Pentacle - a monster with a calculator. You burst DeBlaz and Banks balloon.

I'm not crazy for believing that The City could afford to build truly decent affordable housing. NYCHA is not in the equation.

Yesterday I saw a person with no legs sleeping in a wheelchair on West 31st Street near 7th Avenue, south side of street. Couldn't tell if it were a man or a woman. I know The City can do a lot better. I blame the HRA and DHS employees for not housing that person. Lazy sods who don't like to work but still get paychecks.

Math.
The city's budget for homeless services is 2.14 Billion dollars.
2.14 billion divided by 61,000 - or $35,081 a person per annum.
35,081 divided by 12 - that $2,923 a month.
seems to me that this number is awfully close to what the Mayor defines as "affordable." I don't pay this much in rent, do you? At that number, we can just rent these folks some pretty sweet apartments. Of course, the 2.14 billion number included the City bureacracy. The Homeless Industrial Complex, if you would.

AND you're understating the case. Only a fraction of the homeless are single person households. The 61,000 is the total body count. So for a family of two adults plus one child - staying one ONE hotel room - the city is paying 3X that $2,923 rate.

Don't blame the mayor, HRA, DHS and everybody else.

If one lived in Glendale, Middle Village, Maspeth, Bayside, Malba you would know how many single family home basements have pool & ping pong tables. It wasted space, and that should be illegal. Tax the shit out of them till those selfish pricks change their tune.
If the city cleaned up and stopped this selfishness this homeless and housing problem would not exist.
The city needs more legal new utensils to tackle the problem, ancient laws regarding property use and rights need to be updated!

In places like Denmark and Amsterdam---nobody is homeless, all everybody is guaranteed a roof, food, clothing, health and mental care.

Social Worker - have you lost your mind? Someone works like a dog, makes it, put a pool or ping pong table in their basement and you call them selfish?

If they want to waste and demand to live like fat hogs wasting space sent them to the country. Its no longer 1960 and like that mayor and Governor both say, laws in the way need to be changed, the needs of the many outweigh the needs of few. Especially when those few have $$ to burn.

Below contains growth forecasts through 2021 and market indicators for Scandinavian country construction mayor deBlasio has modeling is vision of New York from.
Google those words from the Swedish government if you don't believe it.

Sweden-- Government objective is for 250,000 new homes to be completed by 2020, whereas the Swedish Association of Public Housing estimates that number to be more like 436,000 dwellings completed by renovation of large former manufacturing structures and the replacement of old private housing via imminent domain.
Hmmm--does that 250,000 number sound familiar ?
How about the words like imminent domain, remember what happened in New London Ct ?

My best advice if you don't like sharing & socialism and you own a home that is not under some historic protection or landmark is get the hell out NYC quick before its taken from your control or worse.
Massive socialism and hyper inflation is coming, no stopping it.

>The homeless problem is the fault of the people who worked hard and have homes!

Just when I thought I'd heard it all.