Why it's important to research history 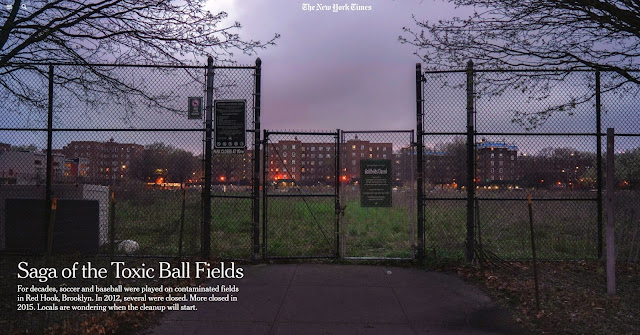 since 2015, most of the Red Hook fields have been closed because of lead contamination in the soil. A $107 million cleanup by the New York City parks department has been delayed, leaving residents, coaches and parents anxious and confused.

“We need our fields back,” Mr. Bazemore said. “But safe.”

Problems started in 2012 when the parks department and the city’s health department learned of a dissertation by an environmental scientist who identified close to 500 lead-smelting sites around the country. One of the smelters once stood in Red Hook, right across the street from the housing projects and right on top of some of the playing fields.

In the late 1920s and ’30s, Columbia Smelting and Refining Works operated on the corner of Hicks and Lorraine Streets, leaving lead in the soil that would eventually become Fields 5, 6, 7 and 8 — the same fields that Mr. Bazemore and generations of children once played on. The parks department and the health department tested the soil in 2012, finding lead levels four times the safe limit on the surface and nearly 10 times the limit further underground. They quickly closed them. A concrete pad to guard against the lead was laid down. The fields and grass were hydroseeded.

In 2015, the Environmental Protection Agency did further testing in the surrounding fields and found more elevated lead levels, causing Parks to close the fields for a four-phase cleanup that has yet to begin.

Work was set to start this spring on Fields 5 through 8 — the worst of the bunch and closest to the housing projects — but has now been pushed back a year because of delays in the construction bidding process. A contractor is now being approved and work should be completed by fall 2020, when a 12-inch buffer of clean fill will be topped by a drainage layer and then synthetic turf.

Just think what we could avoid if the city consulted historians once in a while. Or at least looked at old maps...
Posted by Queens Crapper at 6:52 AM

Building pride in a community is the LAST thing those guys want to do.

An informed community is an armed community and is not only a hell of a lot more difficult to be taken advantage, but can fight for things that benefit their community, and stand in the way of things that harm them but benefits campaign donors (Steinway Mansion in Astoria) and political agendas ('hotels' housing beneficiaries of Democratic Party run social programs in Blissville).

Here's a broad sweeping hypothesis-- since the 1600s, EVERY waterfront property in Brooklyn, Queens and Manhattan likely supported unregulated dirty industrial purposes, at one time or another, well into the 1970s. You do the math.

Money trumps history.
With all of these do nothings like the Queens Historical Society who are ineffective, the overbuilding and ransacking goes on.
Sip your tea and nibble your watercress sandwiches.