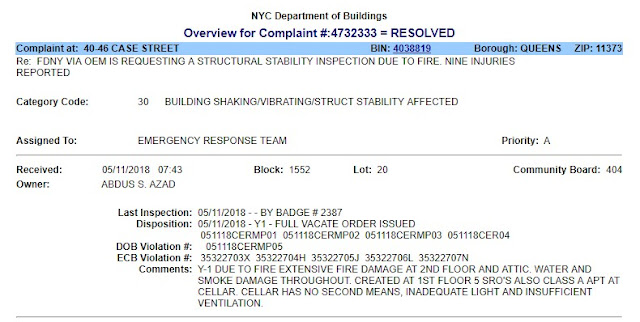 The Queens building where a man was found dead in the attic — a day after the fire was put out — was illegally subdivided, according to the Buildings Department.

There was an apartment illegally created in the basement, and multiple Single Room Occupancy (SRO) units illegally added on the first floor of 40-46 Case St. in Elmhurst, inspectors said.

The Buildings Department has ordered the property owner to board up the vacated fire-damaged building. The owner has also been hit with multiple violations for the illegal conversions.

On Sunday, a city lawmaker who represents the area demanded a full investigation and for stricter penalties for similar illegally converted houses.

The home in Jackson Heights that caught fire also has a history of being an SRO.

HEY HAVE ALL THE DATA THAT WAS GATHERED BY AN INSPECTOR AND INPUTTED INTO THEIR DATABASE. KNOWING THIS, WHY DON'T THEY EVER ACT AND ENFORCE SERIOUS VIOLATIONS. DIBLASSIO BROKE THE MOLD WHEN IT COMES TO HIRING MORE CIVIL SERVANTS BUT HE FORGOT TO HIRE MORE INSPECTORS. WE NEED INSPECTORS OF ALL KINDS TO CRACK DOWN ON EVERYTHING FROM FAILED BUILDING INSPECTIONS TO BADLY PREPARED SCHOOL LUNCHES.

The City's solution for everything: Charge more! Fine more!

The news reported the fire and death, but not the face that it was illegally subdivided. Shocker!