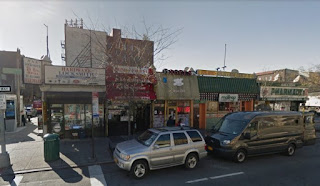 A Queens Boulevard property marketed for its development potential is changing hands for $9.9 million, according to a press release issued by the real estate brokerage firm Cushman & Wakefield.

The brokerage firm said Friday that it had arranged the sale of 43-10/24 Queens Blvd—a property that incorporates about half the block on the south side of the boulevard between 43rd and 44th Streets. Eight stores occupy the space—including Amazon Pharmacy, Dave’s Bagels, Riko and Taiyo Food.

The property has been owned by Geoffrey Henderson, the president of Manhattan-based Henderson Holding Corp., since January 2015. That company purchased the one-story building for $7.28 million. The new buyer has not been named and the transaction has yet to close.

The stores currently occupy 8,500 square feet. However, an owner can develop a 43,700 square foot mixed-use building, according to Cushman & Wakefield.
Posted by Queens Crapper at 7:17 AM

Normal news these days. Considering the zoning in the area, ten million is a bargain for what can be built there. Get over it. Peace and quiet cannot be had there. Sardine can packing is what the area is.
Of course the developer likely loves in Old Brookville.

Malingo's been closed for a while; I never missed it. Their Nepalese/Himalayan (& WTF..Japanese, too? B/c that's always a good sign) cuisine was pretty crap. I've tons better options for momo's etc up the road. Doesn't bode well for places like Natural Tofu or Parrot Grocery down the way and across the boulevard.

Not surprising - it faces the elevated 7, and it's on the boulevard as one runs towards the Queensboro on-ramps...no one saw this coming? Maybe that nice sign will remain decades hence.

Ultimately, what's the point of posting "news" like this, if the buildings/stores

b) don't foster community (no "social" value to residents)

Much as I love to sentimentalize, the same criteria applied to, say, the ICoA or the Elk Lodge by me would pass muster - the places are used, visited, and inhabited. You can't really make the same argument for a locksmith (though I'm sure people like that he's there), some bagel joint, two probably mediocre "ethnic" restaurants. You can probably argue positively for the small-proprietor pharmacy to remain. And who really needs or wants a shitty-food serving White Castle anywhere?

Ultimately there's some stores on the boulevard that SHOULD be taking note of this, and hoping they can either lock in (or have locked-in) decent long-term leases..or thinking about moving over to 43rd avenue, one or two blocks in from the boulevard.

A perfect place for a school next to transportation on a major commercial street.

Instead show your 'Queens Values' Jimmy by destroying a historic building down by 48 St and Barnett - i can just see kids hanging out around isolated rail yards blocks away from the subways - and forcing them to wander through the backyards of the Gardens heading back to the 7 Train, or going to 46 St Station to clash with the fellow rugrats at Bryant.

But then, again, Jimmy ain't got no kids and he needs his campaign coffers filled with developer funds. Yup, 'Queens Values' means "Poor Planning'.

But then, again, Jimmy ain't got no kids and he needs his campaign coffers filled with developer funds. Yup, 'Queens Values' means "Poor Planning'.

And Jimmy will be the next borough president (sigh)....the Queens Dem machine have declared it so

Hey, I like White Castle. Those sliders are so scrumptious I can't help to eat them like a dog would.