The blaze broke out on the second floor of a two-story house on Case St. near Whitney Ave. in Corona around 5:10 a.m., according to authorities.

Four civilians were taken to local hospitals in serious condition. A fifth civilian was rushed to Elmhurst Hospital in critical condition.

The seven injured firefighters were taken to New York-Presbyterian Queens. Their conditions were being evaluated, an FDNY spokesman said. 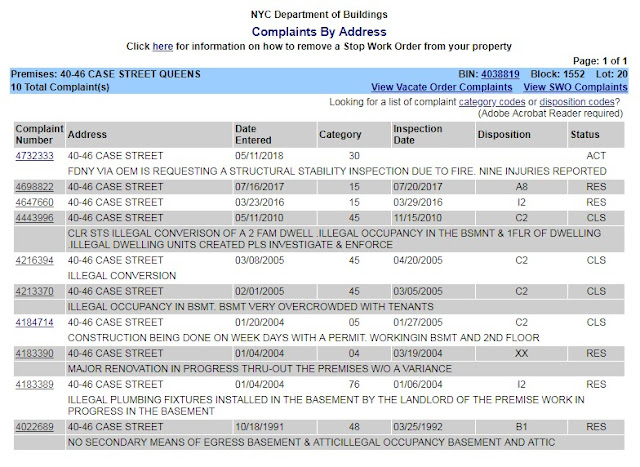 In 1992, a rooming house was discovered there. It was allegedly "cured".
Posted by Queens Crapper at 12:11 AM

Another BIG YAWN. Why bothering even caring anymore about this shit, when the powers that be do absolutely NOTHING about this shit that has been going on forever, even when there own city employees are put in danger or killed.

AND speaking of shit, did you take a load of the shit buildings on both side. I thought this was from some third world county, OH, wait it is, QUEENS.

1. Food - you always hear them marketing immigrant food to the Millennials

2. Social needs - you always hear them talking about the the welfare state needs of immigrants

3. Housing - you never hear them talking about illegal conversations and infrastructure burdens

(Real estate owners make donations to the Democrats. Democrats, at their heart, are a bunch of Hillaries and Crowleys that live in in Virginia or upstate NY or 'out on the island' and believe that the 'deplorable' immigrants can live 'like that' cause 'they don't know any better' and besides, their top party brass would never live in 'those' neighborhoods or send their kids to 'those' schools or birth their babies in 'those' hospitals)

Hey Anon, on your take on Democrats. Sure NYC Democrats are the fucking pits, but please tell me what the wonderful Republicans have done, especially the idiotic bunch in the White House, House and Senate. Please inform us why Republicans are so wonderful. They certainly are not for so-called "family values" anymore and they certainly are not Patriotic Americans anymore, since they seemed to LOVE the Russians.

Face it they are both the flip-side of the same coin. The Republicans fuck over the regular person all the time, and so do the Democrats, but they do it in subtle ways under the disguise of fake "progressive agendas". And all the little people get fucked hard in the ass by both, especially the extremes of the parties. What we need are more liberal Republicans and more moderate Democrats, otherwise it is just one side against the other and we, the little people, get the shaft.

BTW, they found the body of a "hard working immigrant" up in the attic on Saturday. Want to bet on his legal status?

no comment with your comment - but the democrats have their foot on my neck and the republicans don't, so who cares about the g.o.p. as a potential threat.

only care about the enemy in my face, not the theory behind the ridge who is firing at my enemy's back and is therefor my friend.

They were burning candles in a closet - such vibrant diversity.

Take a stroll down Woodside Ave in Elmhurst- every pole is plastered with handwritten “Room 4Rent” and “BEDSPACE for Rent” signs. It is blatant. Everyone knows what goes on around here, but when some horrible inevitable catastrophe like this happens the local media and useless elected officials act shocked and saddened. Why not try to stop this disgusting and deadly practice of illegal house/apt/ROOM subdivision by calling up one of the numbers listed on these signs and investigating? DOB? Anyone?!?!?!

Anonymous said... "joe
no comment with your comment - but the Democrats have their foot on my neck and the Republicans don't, so who cares about the g.o.p. as a potential threat.
only care about the enemy in my face, not the theory behind the ridge who is firing at my enemy's back and is therefore my friend."

REPLY: REMEMBER: It's what you don't see that can kill you. Deviousness is an inherent part of politics. See: https://youtu.be/FhTMy9ma2mQ

>https://youtu.be/FhTMy9ma2mQ
"The Rothschilds connection to Syria"
SERIOUSLY? Come on now, don't be a crank.