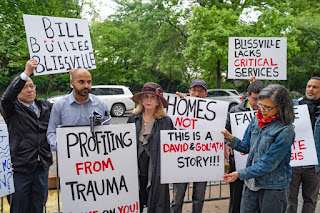 Calling the city’s plan to open a third shelter in a seven-block area of their isolated neighborhood “a threat to the very fabric of our community,” Blissville residents rallied outside the Mayor’s residence at Gracie Mansion Monday morning.

U.S. Rep. Carolyn Maloney (D-Astoria) joined the dozen protesters from the newly formed Blissville Civic Association as they voiced their opposition to the population imbalance that will occur this spring when the city Department of Homeless Services moves 154 adult homeless families into the Fairfield Inn by Marriott on Van Dam Street in the next few weeks, bringing the number of homeless to more than 550 in a neighborhood with less than 475 permanent residents.

Maria Davis, the vice president of the Blissville Civic Association, said the population imbalance would be more like a saturation.

“This is not fair share equity, it’s a reckless and dangerous plan,” she said.
Posted by Queens Crapper at 6:57 AM

Yea, remember her at the Dutch Kill Advocacy Group when they tried to fight for their community.

Well what does that tell you about the support of Phony Maloney. The big question is where is the councilmen from Queens - the Albany delegation? Oh that's right, getting photo ops with seniors, hipsters on the waterfront, immigrant groups, and the ever beloved Participatory Budgeting BS.

Certainly not around these people.

Homeless shelters seem to be the new affordable housing system.
I look at the people living there with their children and they are all mostly able bodied adults... give them the jobs to clean up the parks or city jobs without pay in exchange for housing. There is no oversight here just handouts. You go by the "sweet home" off the expressway and you see them smoking bright and early in the morning with the kids in the stoller... how can you afford cigs?

How many homeless shelters are there near the mayor's home in Park Slope?

Rallies fall on deaf ears.
Make you feel good but the crooks steamroll over you.

Its sucks, only 12 out of over 100 people who claimed to give a shit showed up.
People are lazy and unwilling to put up a good fight, shitheads like my Greek landlord actually wants a developer to buy so he can cash out and go back to Europe now wants me out.
Fuck this I'm moving to lower Ridgewood, Kadoo's to the lazy unwilling to fight for helping me make up my mind

Doesn't matter if 500 showed up.
Just a fart in a windstorm as far as Duh Blasio is concerned.
This is REBNY New York!
That's who's the real mayor and city council!
As far as those SOBs are concerned you can either afford to live in the "right" nabes or leave NYC!

shitheads like my Greek landlord actually wants a developer to buy so he can cash out and go back to Europe now wants me out.

Well that certainly explains Vallonia. Thanks!

They state these people's position. Then state 'but others are not bothered by the developments' without giving proof, but certainly taking the wind out of the sails of the protesters.

Note this the next time people protest development - the recent article of the Jackson Heights development on 82 St is a good example.

BIG DEAL!
Dies that get you what you want?
Very doubtful!
You dummies keep on voting your same crooked politicians in...,over and over.
DUMP ALL INCUMBENTS!
Do you wear the same underwear all week?
Your local pols reek! Change 'em!

>You go by the "sweet home" off the expressway and you see them smoking bright and early in the morning with the kids in the stoller... how can you afford cigs?

Buy them off of people who get them from states with minimal tobacco tax. Even with their markup for driving it up from South Carolina, it's still half the price of a legal pack in a bodega or gas station.

>They state these people's position. Then state 'but others are not bothered by the developments' without giving proof, but certainly taking the wind out of the sails of the protesters.

I don't doubt that happens, but I don't see anything like that in this article.

^^^ Nothing this guy says is true.

The Catholic church is both the largest property owner, and advocate for illegal immigration in NYC. Why wont they give it up to or Billy Blasshole for the poor ?
This is a case of pure naked marxism, a concept that government elites know what is better for you than yourself !
This sack of shit also wants to regulate every bit of private property from your toilet seat your car seat, but he ONLY believes in regulating the private property of others. I believe private property is literally the foundation of Western society and what was once called democratic government.

Private property is what eroded the power of monarchy and created the merchant middle class, a system that gave people outside of the aristocracy power to influence government and to protect their rights. Private property also created the concept of the free working class, who had the ability to develop their lives and interests and realize and appreciate the fruits of their labor.
Other foundational concepts like voting and free speech included.

Think about it: If capitalism loses most of its meaning and population is not allowed to own their own property one can enact change using property as a weapon and without speech/voting. ..make sense yet ?

Yeah, I imagine if you tried to nail him down on the details of his ideas, and educate the stupid public about what he is doing? Its would fall apart, or come across a little differently. How a such a piece shit became mayor of NYC, which is the epicenter of capitalism in the world is perhaps one of the most mind boggling this in this century to date. Amazing to see someone in a position of authority scoff at principles so basic to what America is about. Liberty, private property, and limited government. DeBlasio is saying to hell with all that.

I can see this shit in places like Russia, China, and North Korea. Perhaps Bill DeBlasio should go fuck himself there.