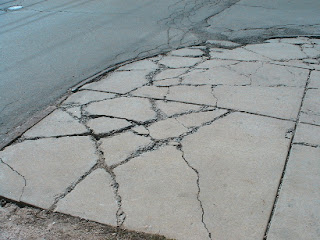 The City Council approved a measure Wednesday that will give landlords an extra 30 days to repair damaged sidewalks abutting their properties, stretching the deadline to 75 days from 45 days. Minority Leader Steven Matteo, R-Staten Island, who sponsored the bill, said the idea grew out of constituent complaints from his district—where single-family homes predominate.

He noted that the city hands out many repair orders during winter, when cold and damp conditions can make work impossible.
Posted by Queens Crapper at 6:40 AM

'He noted that the city hands out many repair orders during winter, when cold and damp conditions can make work impossible.'

So it goes from fully intact to that picture in the course of one winter?

For the people who will wait until they are told, repeatedly, to fix something, you now have a temporary reprieve.

Why should homeowners be responsible for city property.If the city can come along and plant a tree,or a bioswale or utility companies put up a pole, why should I have to pay for a damaged sidewalk?There is a Bill in the Assembly to change this but has little support,the city needs the money.

What happens when your sidewalk is damaged BY the city? The DOT repaved my block in southeastern Queens in October 2007. In the process, these untrained gorillas damaged several chunks of my curb (which I have saved as proof in my garage), and told me that they would be back next week to repair it. They never came, and for a decade I've been calling Community Board 10, useless Eric Ulrich's office, useless Joe Addabbos's office, useless Michael Miller's office (before gerrymandering landed my district with useless black Assemblyman Michele Titus (and her friends and family payroll of worthlessness), and now because there is no curbing, my adjacent sidewalk sunk in, where heavy rainwater collects and creates even more damage and danger for anyone who isn't watching their step.

So, according to Marsilia May of Community Board 10, there is no contract with the city to fix my property in which the city itself damaged. This is why we pay taxes and get more of the same taxation without representation. I've given up on Queens County, because it's now the official gateway to The Fourth World. Maybe if it happened to Bill de BLASS-hole's Brooklyn rental in Park Slope, for which his tenant pays nearly $5,000/month will the city come out and repair the damage. Maybe they can also repair his permanent brain damage as well - that cement and black top have been known to do wonders for broken streets (and now possibly broken brains, too)!