LIC will get more hotels, like it or not 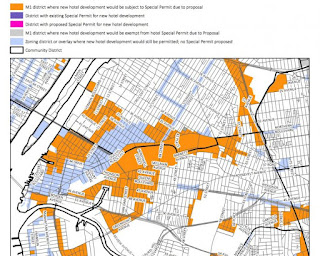 A large stretch of Long Island City will be exempt from the city’s new plan to curb hotel development throughout the five boroughs.

The city’s proposal would require hotel developers to obtain a special permit–requiring a lengthy public approval process–to build in certain manufacturing and industrial districts around the city. The Department of City Planning, the agency behind the effort, began the public review process to amend the zoning text that would require these permits just days ago.

The city, which has been working on the proposal since 2015, says the special mixed use district was excluded because it has the infrastructure in place to support hotel development without it detrimentally affecting communities in it.

“The M1 Hotel Text Amendment provides much needed control in the Industrial Business Zone but it does not provide protection in the low rise residential areas,” said the LIC Coalition, a local community group.

“There is no reason to believe that once squeezed out of the M1 zone, hotel developers would not seek opportunities where they can,” the group added.

Translation: The City wants more homeless hotels in LIC.
Posted by Queens Crapper at 12:59 AM

“The M1 Hotel Text Amendment provides much needed control in the Industrial Business Zone but it does not provide protection in the low rise residential areas,” said the LIC Coalition, a local community group.

true enough, but that ship sailed. lic is no longer, and almost never was a low rise residential area, except by accident or where overlooked. it still serves a purpose as a buffer to contain and centralize development, to rest of our benefit, as sad a role as that is.

How do you solve a city's homeless problems? You build, build, build. Build more hotels so that they don't serve tourists who bring in lots of $$$ to the city.

And you can bet there will be no hotels north of Astoria Blvd.

After driving by the Astoria Manor and other displays of that taste/culture you really got to ask yourself how much longer can that crowd live in their little world?

"much needed control"
Yeah, no new news here, Same shit people like Hitler and Leonid Brezhnev said.
It seems these people want controls on everything. This all happening too fast to be stable and becoming insane.

LIC is Manhattan East.
Ain't nothin' gonna change that!
Like it or leave it.
Astoria's not far behind.

Well at least some good news came out today crappy, one of Dumblasio's closets allies has resigned in disgrace:
https://www.politico.com/states/new-york/albany/story/2018/05/07/new-york-attorney-general-schneiderman-resigns-in-wake-of-bombshell-report-403563