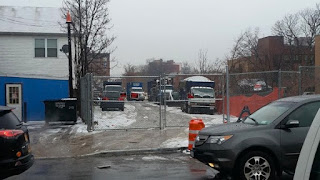 From December 2017 to March 2018 there were several complaints made to the city Department of Buildings regarding illegal commercial vehicle storage.

Hollingworth said he and neighbors, who are mostly elderly, did not know who to turn to. He said they felt hopeless when 311 was not taking action. Hollingworth contacted Times Ledger on March 14 where he was directed to DOB and City Councilman Peter Koo (D-Flushing) for further assistance. Two days later on March 16 DOB inspected the lot and issued violations for illegal commercial use of the property in a residential area. The violations had a cure date of April 25 or a date by which the property owner was compelled to correct the violating conditions. DOB’s padlock unit also sent a warning letter to the property owner April 17 directing him to cease illegal use of the lot.

Neighbors speculate that Frank Camisi loaned the lot to Arnoldo and told him if he cleaned the lot out for him, he would be able to park his trucks there for free or at a low rate.

On April 22 neighbors said the the truckers were gone from the lot, but debris remained that reminded them of their misery.
Posted by Queens Crapper at 12:11 AM

Where did this happen? Is there an actual location?

Don't worry they will now sell the lot and build a 6 story fedders special on top. We cant have an ounce of vacant land in this city.

Not knowing who to turn to, Hollingworth and other neighbors made noise complaints to 311 for months with no results. On Feb. 8 at 7:27 a.m. a complaint was filed that read “Trucks and workers making a lot of noise at 6:30 a.m. people who live on this block are getting pissed off. People are already getting into each other’s faces over the noise since October 2017. These trucks are not supposed to be there. It’s illegal.”By 9:50 a.m. the complaint was closed.

“The Police Department responded to the complaint and with the information available observed no evidence of the violation at the time.”311 responded.
From December 2017 to March 2018 there were several complaints made to the city Department of Buildings regarding illegal commercial vehicle storage.

COMPLETE DISCONNECT WITH OUR 'ELECTED' OFFICIALS AND OUR 'APPOINTED' COMMUNITY BOARDS.

2nd Anon is probably right. After the fedders special goes up they'll wish they had the truck parking back.

So 2 days after contacting DOB/Koo, City did what it was supposed to, and in just over a month, appropriate action was taken. "But debris remained that reminded them of their misery"? Seriously? There's no story here.

^Anon: I do agree with that sentiment, but a lot of vacant lots are "leftover" from rougher, harder times, when it wasn't feasible to do anything with them but let them sit vacant. In most cases, it doesn't bear sentimentalizing these places, except perhaps in those cases where they'd've made a nice Community garden (which actually has happened to many spots in W'msburg, nicely).

If you're gonna pull this crap, you'd think they would have the decency to put up a fence & gate with the slats so you can't see through.

These elderly need to be quiet and stop bitching before the landlord gets fed up and sells. Trucks are a much better deal then a big Fedders box going up creating no more street parking and 100s of people, stinking big familys of ugly foreigners coming and going 24-7.

These old cranks have forgotten what real trouble and misery can be, they really should ZIP IT and keep the truckyard. If they draw the city's attention the city will re-zone it for a hotel or big nasty barracks, in term flushing them and there small homes straight down the toilet