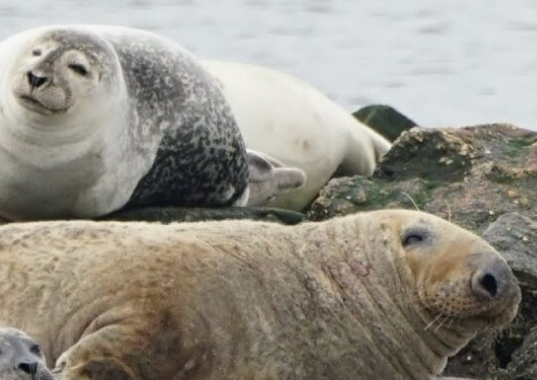 Seals and humans have flocked to the Rockaways over the past nine months, leading to a higher-than-usual number of run-ins between the two mammal species — and the occasional unlucky dog.  Local marine wildlife experts warn well intentioned beachgoers to keep their distance: Seals aren’t as cuddly as they seem.

“A lot of our seals were at normal beaches that would be less populated,” Montello said. “But because of COVID and everybody coming out here earlier in the year, we had patrons that maybe had never crossed with seals and were super interested in these animals.”

The 16 encounters so far reported to the New York Marine Rescue Center in 2020 are the highest total in a decade, she said. Seven of the cases involved people pulling seals into the water, removing them from the beach and offering them food and water, Montello said.

The center has also found that more seals are sticking around for the summer, which may result from trouble up north. According to the International Fund of Animal Welfare, melting ice in the Arctic has increasingly displaced Atlantic seal populations that rely on pack ice to birth and wean pups.

Milder winters caused by climate change can spur unusual seal migration patterns, bringing more herds to New York’s shores. Rescue groups have encountered harp seals, an Arctic species among the first to migrate to New York Harbor each year, hauling themselves further up on the beaches in search of ice.

Harp seals started showing up in the area around the mid-1980s, said Marine Mammal Stranding Center Director Bob Schoelkopf. Since then, the harp seal population has been on the rise in the Tristate Area. New Jersey had its first recorded harp seal birth several years ago.

Don't worry about too many seals. The sharks will be there soon to reduce their
population. Wherever seals go sharks will follow them.
BTW ever wonder what seals eat? Fishermen in New England hate them.
Lastly, there is plenty of pack ice for seals in the Arctic

The Rockaways will soon be under water , so the seals will have it all to themselves.

That's why they are practically giving away deal estate by the beach.

Your correct , the real estate is cheap. I can always count on the poor and white trash east of 116th street to count on for a great profit.
Plus the commut is soooo easy.

You mean they get to live rent free?

They don't have to pay ridiculous high property taxes to pay violent, drug-addicted homeless men to live in hotels and in residential neighborhoods to urinate on the sidewalks and harass people on the streets?