Remember Remember the 7th of December... 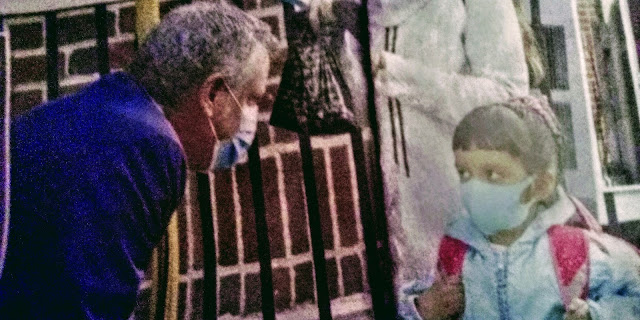 However, all schools located in orange and red microcluster zones will have to follow the state's guidance in order to reopen.

The mayor said the city will address the future of middle and high schools at a later date. For now, those students will continue with remote learning.

Students will not be allowed to return to in-person classes unless a signed COVID-19 testing consent form has been submitted by a parent or guardian, according to de Blasio. Families can fill out and submit a consent form by visiting, mystudent.nyc.

Additionally, the Department of Education is moving toward having students whose parents chose in-person learning be in the classroom five days a week. De Blasio said some schools are prepared to offer full-time in-person learning as early as Dec. 7, but other schools will need more time to ramp up.

The update comes more than a week after de Blasio announced public school buildings would temporarily close as a result of the city's seven-day coronavirus positivity rate reaching the 3% threshold he previously set.

As schools prepare to reopen, de Blasio said the city is taking a new approach to monitoring safety moving forward. The city will no longer use the previous citywide 3% positivity rate threshold to determine the fate of schools.

De Blasio said the 3% threshold was very stringent and purposely set at the start of the academic year amid many unanswered questions and concerns about the pandemic's affect on schools, but the city has since proven that it can keep students and staff safe despite a higher positivity rate.

"We feel confident that we can keep schools safe," he said.

If de Blasio thought the threshold that he mandated for closings was so stringent, why re-open them with city cases at 4% and climbing?

Of course is based on real science. From the likes of Dr. Birx

Assume you have the virus, because you had the audacity to get together with your family on Thanksgiving. What a quack!

Waiting for Frauduci to weigh in. Did anybody hear any reporter ever asking a basic, simple question like - how much stake do you have in the vaccine producing Big Pharma companies?

Well some call this science I guess.

Can anybody keep up with this crap anymore?
Just further proof that all this has been indeed The Great Scamdemic.

Finally something good in NYC

Cash has to be accepted on any transaction.

Chuckie Schumer is a real fighter


Wow. Why do we need elections then?

Chuckie what is wrong with you boy?

Ha Chuckie getting nervous. People getting redpilled and waking up to the steal

Furious parents that can’t dump their kids off in schools so they can go to work or not have to take care of them when working from home trumps science. I believe small children are allowed as evidence shows small children are not vulnerable. No different than the Spanish flu that actually was very virulent for young adults.

Older students are still learning from home. I haven’t kept up with all the news.