Blood on the tracks 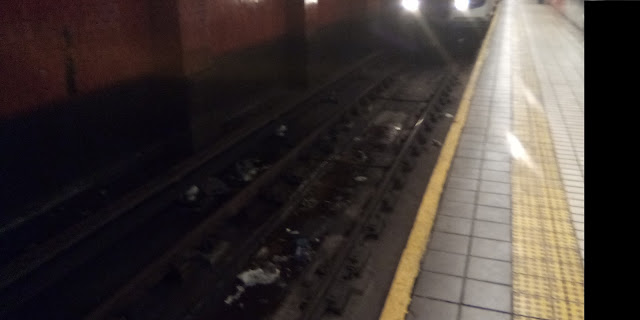 A gruesome discovery by transit workers last week — an arm inside a subway tunnel — underscored a troubling trend: a growing number of people ending up on the tracks.

MTA statistics obtained by THE CITY show at least 720 instances of a “person on the roadbed” this year — including one Sunday morning in which police said a man survived after being shoved onto the tracks at Atlantic Avenue-Barclays Center in Brooklyn.

That’s nearly as many as the 781 cases in all of 2019 and almost 200 more than five years ago — despite a steep pandemic-driven decline in ridership and the suspension of overnight passenger service.

Some transit workers and homeless advocates believe the overnight shutdown could be helping driving the roadbed incidents.

In addition, the MTA has recorded more than 180 collisions between trains and people this year — creeping past the 182 incidents in all of 2015.

“Sadly, these numbers continue to point to the mental health and housing crises we are experiencing in this city,” Feinberg told THE CITY.

The grim figures follow a week in which an E train fatally struck a 54-year-old man Friday inside a tunnel near the Woodhaven Boulevard station on the Queen Boulevard line. Meanwhile, a 40-year-old woman survived being pushed onto the tracks and passed over by two cars of a No. 5 train at 14th Street-Union Square during the Thursday morning rush.

"New York, New York.
It's a helluva town.
The Bronx is up
And The Battery's down.
The people die in
A hole in the ground."

So this is why the ridership numbers are down. I guess the MTA only counts it if you are IN the train

Cuomo, DeBozo - you created this. Crimes against HUMANITY as per the Geneva convention.

Institutionalization needs to be brought back, with controls to prevent cops from abusing it to imprison their critics.

All train systems should have retractable doors (like the Airtrain) to prevent pushing incidents.

Stupidity rules. The cops are the enforcers of the corrupt political hacks.
So go beat them up, the hacks. Start with the FBI - national disgrace!

People who need help, yes, they should get help.

The people are the problem and you cannot deny that.