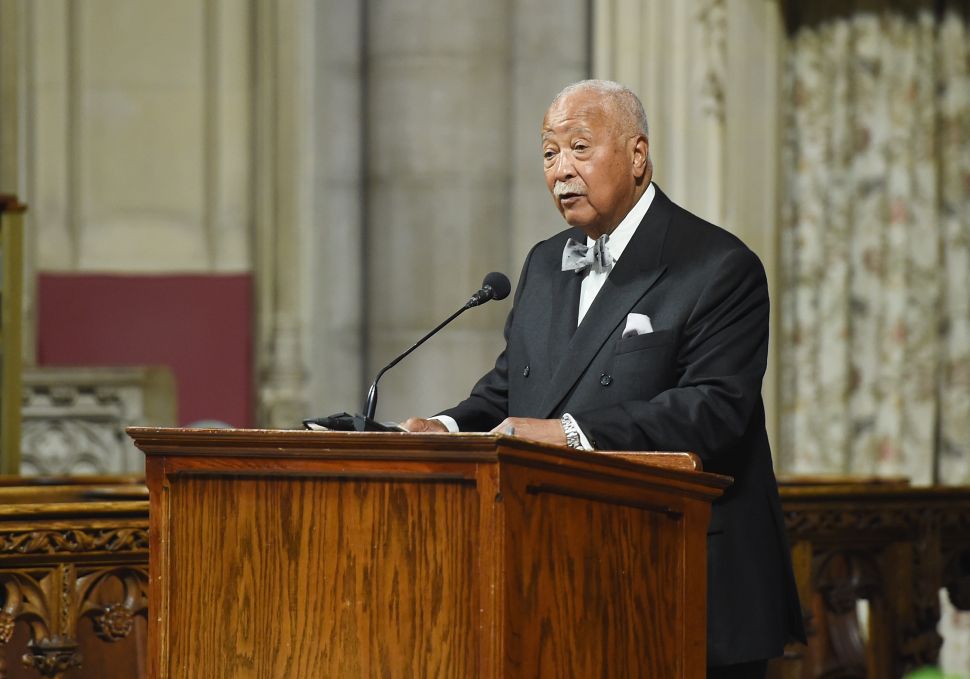 Police responded to Dinkins' home Monday evening, just after 9 p.m. after a 911 call came in from a home health aide who discovered him.

He was pronounced dead at the scene.

Dinkins was the 106th mayor of the city and the first, and so far, only Black person to hold the office.

The pinnacle of his career was becoming mayor of New York City, making history in the process.
Posted by JQ LLC at 6:44 AM

May he rest with his big Headboard in the sky !

RIP Mr Dinkins, you are no longer the worst mayor ever.

As a human being - May he rest in peace.

On the day he left office, Dinkins signed a 99-year lease giving USTA parkland in Flushing Meadows Park. Part of the lease mandates that planes to and from LGA do no fly over the stadium during the USTA games in August-September, thus re-routing flights over populated downtown Flushing and surrounding communities. The city will pay USTA a penalty fee if planes are not re-routed.

"But because the NTC is still registered by the state as parkland they pay no property taxes. Additionally, the city has issued $322,025,000 in City Bonds to finance USTA’s work on expanding the NTC, according to Make the Road. The bonds are completely financed by the city and the USTA has no obligation to repay the bonds.

In exchange for economic incentives from the city the USTA promised to replace the park land that was lost with new parkland. Instead of acquiring parkland at a site nearby, the USTA purchased 24 acre Powell’s Cove Park in Whitestone, Queens. Of the 24 acres, only 7 acres are above ground with the other 17 acres comprising of underwater marshland. To make matters worse, the NTC’s facilities are hardly accessible to the public during the rest of the year."

You can say what you want, but here is the action during the WORST MAYOR EVER:

Mr. Dinkins, may you rest in piece. I did not vote for you, I did not agree with you, but you always were a GENTLEMAN compared to these commie Marxists scumbags.

God be with you.

Talk Radio's Bob Grant had THE perfect description of Dinkins. Thumbing through a newspaper on his show, Grant espied a photo of the then mayor wearing a white dinner jacket at a NYC soiree of some sort. Grant immediately remarked that Dinkins looked like "the men's room attendant at the 21 Club."

At least he lived long enough to see a real asshole thoroughly destroy NYC to clean up his legacy a bit.

Mr. Dinkins, may you rest in peace, should read.

RIP Mr. Dinkins. Atleast you lived to see a worst mayor than you. So you can now RIP. Mayor dumbdumb took over the crown as worst mayor ever of nyc.

Sorry but he was the mayor of NYC when murders reached over 2;500 a year. Rudy changed that.

Talk Radio's Bob Grant had THE perfect description of Dinkins. Thumbing through a newspaper on his show, Grant espied a photo of the then mayor wearing a white dinner jacket at a NYC soiree of some sort. Grant immediately remarked that Dinkins looked like "the men's room attendant at the 21 Club."


And what was Mr Gigante; a bigoted little "dago" with a fake name and hair.

Murders started to drop under Dinkins, see below opinion article.

Theories on why murders peaked and fell when they did include the fact that it was around the time when Roe vs. Wade prevented pregnancies, had they been born to high-risk (poor) parents, would have been at the age (late teens and twenties) when criminality usually occurs. Plus the phase out of leaded gasoline in the preceding two decades could have also had a positive effect, as lead seems to cause impulsivity and might lead to criminality.

@Rob. Alice Roosevelt Longworth said the presidential candidate and governor New York, Tom
Dewey, reminded her of the little man on the wedding cake. Grant's description of Dinkins was spot on. Sorry your liberal feathers got ruffled. Kurt Tucholsky, the German essayist, once wrote" "Was darf die Satire? Alles." (What is satire permitted? Everything.)

Actually being the men's room attendant at the 21 Club is a very prestigious, well-paying position. Definitely not to be looked down upon.

Grant eschewed the name Gigante as a career move because of widespread. anti-Italian bigotry. (Many famous people have changed their names. (Did you know. Rob, the real name of Mark Twain was Samuel Clemens?) Plus, you yanked on Grant's hair to see if it was fake?

I remember the bathroom attendant!

I've seen guys dressed and looking like Dinkins in the mens rooms of The Plaza and Pierre Hotels in Manhattan. They hand you a little towel to dry your hands all the while they gently brush your suit jacket with a whisk broom. Makes you feel like a hundred bucks.

Product of the education system or shall we call indoctrination system?

Either way, I enjoy when he starts posting his "scientific" non-sense from NY Times/Slimes.

Stupidity on display. mixed in with propaganda.

He lives a charmed life in Manhattan, or is it his parent's basement?

"Sorry your liberal feathers got ruffled." Laughing My Freaking Ass Off !