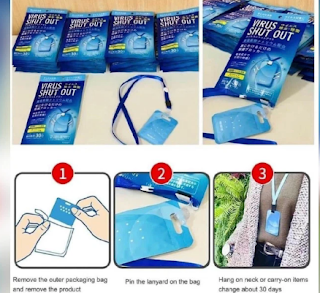 With these cards, you could be playing a real dead man’s hand.

A group scammers tried to make big bucks by selling useless cards that they falsely claimed would ward off COVID-19 and free users from having to wear a mask, prosecutors said.

The so-called “Virus Shut Out Cards” were meant to be worn around the neck on a cord and act as “air sanitizers” that killed the coronavirus — but they were really bogus snake-oil protection.

“The brazenly false claims allegedly promoted by the defendants about their product potentially endangered the public not only by claiming to protect against the COVID-19 virus, but also by exposing users to the health hazard posed by a misbranded pesticide,” said Acting U.S. Attorney Seth DuCharme in a statement.

Po Shan Wong, the general manager of JCD Distribution Inc., and Zhen Wu, the company’s sales manager, allegedly sold the cards in minimum quantities of 50, charging $9.50 each, over the phone and online from April to July, the complaint states.

JCD allegedly claimed on their Facebook page in Mandarin that the cards were “portable space disinfection and sterilization” devices that emit chlorine dioxide, which they touted as having a “sterilization rate at 99%.” Chlorine dioxide — a gas at room temperature — is actually a bleaching agent and a pesticide, officials said.

Sounds pretty much what Big Pharma is doing.

What happened? Jealous of competition?

Courtesy of the people who brought us bat soup.

And there are people out there who bought it ?

Joke of a world

Now we know why no one in the Rose Garden at Amy Coney Barrett's “coming out party” were wearing masks or were socially distancing - they must have been wearing “Virus Shut Out Cards”. Yet another reason for the President to complain about China.

I need one invented to keep Krazy Liberals six feet away !

Hope trump does not read Queens Crap, otherwise he will now be touting "Virus Shut Out Cards"! trump corona task force working for the people!

Yet another reason for the President to complain about China.

Feel free to move to China. Xi Jinping will welcome you with open arms.
Live there for a while, maybe you will start appreciating the US.

Their Covid cards are no more of a scam than Cuomo's and DuhBozo's lock down mask wearing kubuki Covid will kill you kubuki theatre of the hypochondriac. NYC is filled with neurotic hypchondriacs which is why the population worships Covid and will stay locked up wearing masks indefinitely.

These cards make as much sense as the rest of the phony pamdemic.

Sounds about right to me they started the virus and invented the cure. China has the answer for everything.

Covid cards are a fraud? But medical marijuana is the real deal! American medicine is as phony and corrupt as the Queens Democrat party.

Lockdown # two on the way ! New Yorkers voted for it ....
NY And NJ Announce MORE LOCKDOWNS, It's Starting Get Ready For the Biden Lockdowns !

This fucking senile incoming president is talking about shutting down the whole country. When are people going to wake up and stop being told what they can and can't do like little children and start thinking for themselves.

This fucking idiot governor is now telling telling us how many people we can have over for thanksgiving. When is this shit going to stop.

Pretty soon we will be waiting in lines for food and toilet paper.
Oh I forgot we are doing that already. It's a slippery slope we are on. Wake up and stop being brainwashed folks before it's too late. WAKE UP

Yep. We financed communism too. Ample evidence, you know the best enemies money can buy.
For Wall Street, the bankers.


Pretty soon we will be waiting in lines for food and toilet paper.

Word has it that the truckers across the nation are really pissed. Really pissed. Nov. 29 they will have a strike. God help us all.

Trump rallies in every state capital including DC on Saturday the 14th at noon. #MAGA

Meh. In the end it's not much less effective than a face diaper.