Everyday is Halloween at State Senator's and his sister's house 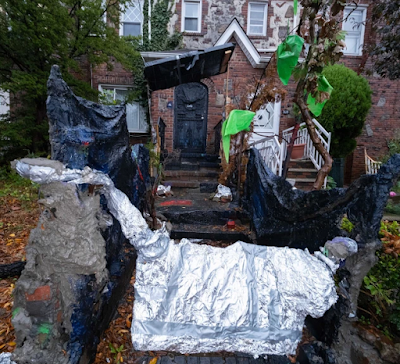 Neighbors say they’ve been creeped out for months by an apparent concrete and plaster “art installation” in the front yard of a Brooklyn row house owned by the sister of state Sen. Kevin Parker, who lives right across the street.

Since last December, the front yard to the two-story brick home on Avenue H in Flatlands has been an ever-evolving of construction of garbage, tree limbs and odd sculptures of painted plaster, cement and aluminum foil.

“It has nothing to do with Halloween,” one rattled neighbor told The Post. “For Halloween, it’s OK, but it’s been there much longer than that.”

“Maybe to them it’s art,” another neighbor guessed.

A half-dozen neighbors reached by The Post said they are wary of complaining, given the residents’ macabre decorating sense, which they variously described as “creepy,” “terrible,” “an eyesore” and “scary.”

“A lot of people are very, very afraid of that house — I mean, honestly, I walk on the other side of the street or I don’t go down there at all,” said one person who lives in the area — and who asked not to be named or even referred to by gender. (!!!)

The Brooklyn home with a garbage pile “art installation” on the front lawn that’s been creeping out neighbors for months is partially owned by state Sen. Kevin Parker, records show.

The two-story blight, found on Avenue H in Flatlands, is owned by Parker’s sister but it turns out the pol has a 50% stake in the property, his most recent financial disclosure records from 2019 show.

Lawmakers are required to submit the disclosures to the New York State Joint Commission on Public Ethics, which publishes the records on their website.

Buried on page 17 of the form is a section where lawmakers must disclose properties they own and it shows Parker listed the Avenue H monstrosity and wrote he had 50% ownership.

Pretty house. That thing over the front door has to be a hazardous violation though...illegal awning???

Not surprised that people don't want to be named in connection with this story, Senator Parker has a noted temper, he's assaulted his own staff.

Just dont call the cops, Kevin might punch a couple of them.

It looks like ANOTHER Haunted House (actually, a haunted ski lodge of downhill losers) up in Albany that is occupied by the greatest ghoul of them ALL: CUOMIGULA - and, he simply will NOT DIE - so unlike the formerly American middle class economy, not to mention how this dynastic family government criminal, Sonny (and, his entire CRIME WAVE of a depraved family) bankrupted New York State to the tune of $13 Billion that Sonny - and, THAT was BEFORE the Coronavirus 'SCAM-demic!'

Where is a prosecutor to present charges before a Grand Jury for this openly practicing malignancy?

Call the fire dept,oder of gas.