de Blasio's Buildings Department is as absent minded as him. 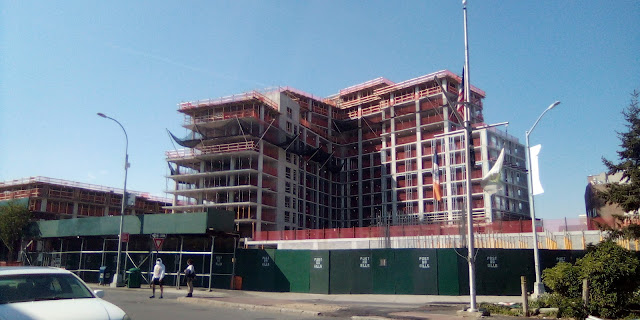 Stringer’s investigation revealed that the DOB failed to conduct 2,986 of the nearly 6,381 required reinspections within the 60-day timeline required under the administrative code — and that it never scheduled another 596 reviews.

Additionally, the Comptroller’s office discovered that the DOB busted its 60-day deadline with another 1,819 subsequent followups.

“No one should have to live or work in fear of debris or unstable scaffolding crashing down on them in a home, place of work, or at any other site in this city,” said Stringer.

“Our audit of DOB’s internal procedures uncovered multiple failures that pose a direct risk to public safety,” he added. “DOB has a responsibility to protect the public – and it absolutely must live up to that promise.”

The probe focused on the violations that have been “identified as posing a threat of imminent danger to public safety or property.”

Stringer’s office also uncovered that the Buildings Department frequently misses its internal goals when it comes to reviewing paperwork to ensure repairs are properly completed, hitting the 21-day self-imposed deadline just 42 percent of the time.

City officials said in a formal reply to Stringer that they agree with the recommendations to redouble their efforts on the 60-day reinspections and to formalize the 21-day goal for processing certifications of repairs. In a statement, they broadly defended the agency’s performance.

“We’re improving our service levels across the agency to meet our other legally required timelines, all while handling a significantly expanded workload,” said DOB spokesman Andrew Rudansky. “New York City deserves safe communities, and we’ll do our part by holding our inspection work to the highest standards in the country.”

Worrying about the wrong thing.

Screw you and you steroid brother. Scum is what you are.

I think the bigger problem with the DOB is that for many violations of the highest safety concern "Class 1", they simply fine and mail or post notices to the property owner, but take no further action. I believe they have the power to take owners to court (beyond the OATH hearing) or fix problems and then place a lien on the property, but they don't use these remedies in most cases and violations just sit and accrue for years.

Another issues is that there are some issues that overlap both the DOB and DOT, for example, retaining walls on public property and old curb cuts for locations that used to be an car dealer or repair shop, but are no longer. Try to report these types of issues to either agency and they'll both point fingers at the other.

Imagine government in charge of your healthcare!

They hasn't been a real building department in over 25 years. Self inspection has ruled the construction of new developments for a very long time. NO mayor has inproved this situation because all memebers in the city council and all mayors take $$$$$ for their elections.
So this will always continue

Correct. Is a scam. Just like everything else. Super hazardous conditions need to be addressed pronto, not in years and not with finger pointing!