The NYPD is banned from applying chokeholds during arrests 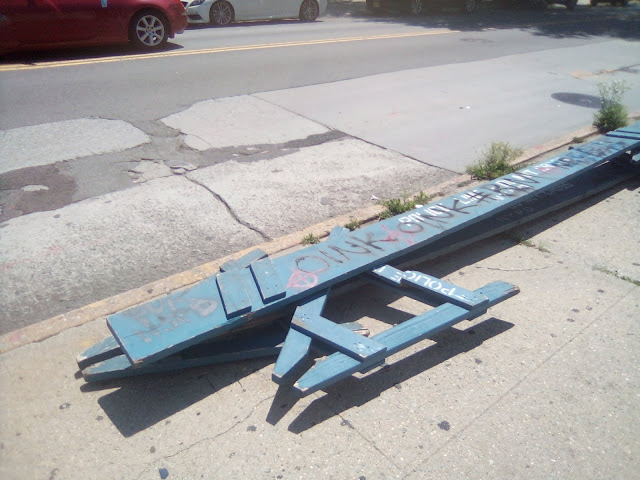 Mayor Bill de Blasio signed a suite of six NYPD reform bills Wednesday, including a ban on chokeholds, while acknowledging concerns that the new laws will make it harder for cops to do their jobs.

“People want to be safe. They need to be safe. They want to work with the NYPD and they want respect in turn,” de Blasio said while signing the legislation package in the Bronx after joining activists to paint “Black Lives Matter” on Morris Avenue between between 161st and 162nd streets.

“I also want to be honest when there are concerns out there. It makes sense to talk about it, not to run away from it,” de Blasio said.

On the bill that will make it a criminal offense for cops to use chokeholds, de Blasio said, “I know many in the police department including many I truly respect are concerned.

“Because although they agree 100 percent and it’s been the policy of the police department, we cannot have chokeholds, there’s concern around some of the additional language around diaphragms.”

In addition to criminalizing chokeholds, the bill includes a prohibition on other restraints of a person’s diaphragm or ability to breathe such as sitting, kneeling or standing on someone’s chest or back.

Interesting that the Blaz wants to have conversations about policing policy now when he was pretty comfortable excusing the tactics employed by his NYPD during the George Floyd protests and his idiotic curfew.

And this idiot mayor thinks this will make cops want to risk their freedom while doing their job. Welcome back to the early 80s and cop being statisticians. Making sure they get there after the fact and take a report. It's called reactive policing rather then proactive.

I feel sorry for all the good law abiding people of this city. Like sheep being led to slaughter. Keep voting Democratic. You get what you vote for.TOTAL ANARCHY

The criminals are the good guys and the cops are the bad guys. What bizzarro planet am I living on?

They'll just go back to the old days of 'wood shampoo'.

To the point said...

Forget the chokehold. How 'bout a swift kick in the balls?

So how exactly are the police supposed to subdue a wildly struggling, maybe drug crazed perp who does not want to go down quietly? These restrictions are going to put the arresting officers in danger. They will have to think, "Now how am I allowed to bring this guy in? Touch his chest? No. Touch his arms. Maybe. Touch his throat? No. Umm......" and while that's going on, they get slammed or stabbed or worse by the perp. Nice going, Mayor Moron. I'm sure even more officers will retire now that you've tied their hands on how to do their jobs, and very few quality people will want to enroll in the police academy if these are the working conditions under which they would have to serve.

This is the bed Deblasio made so lie in it. You went from the safest city to back the violent one.

Unfortunately, because one cop in the hinterland of Minnesota did not know how to properly use a carotid restraint, a man presumed innocent, lost his life, millions upon millions of dollars of damage was done to many U.S. cities by people protesting this misuse and the country is on the brink of Civil War. This is an extremely dangerous type of restraint, should be held no more than three seconds, if used improperly, without proper training and without proper supervision. I really don't think the P.D.s have the supervisory manpower to watch every officer and be assured that this restraint is done correctly. Banish it. Yep, maybe the stick was a better option.