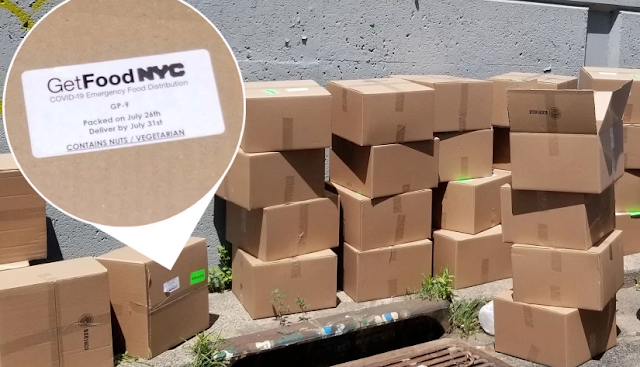 Piles of unopened boxes of emergency city coronavirus meals meant for the poor were found dumped on the side of a Queens underpass Monday.

The outrageous sign of waste — after Mayor Bill de Blasio predicted up to 2 million New Yorkers would go hungry this summer amid the pandemic — was enough to make passers-by sick.

“Why wouldn’t you go give it to people in the streets?” local resident Juan Heno said of the 34 brown cardboard boxes of food piled on top of each other along a concrete wall below the Queens Midtown Expressway, around 57-45 74th St., in Middle Village.

“The city has a lot of homeless right now,” Heno noted to The Post.

He said he called the city’s 311 hot line and was told someone would pick them up — but they were still laying out in the sun more than eight hours later.

Inside the boxes — part of the de Blasio administration’s much-touted program to feed the hungry during the country’s economic crisis — were plastic containers filled with food.

Some of the containers, marked “VEGETARIAN” and “CONTAINS NUTS,” held a bag of multigrain pretzel Pepperidge Farm goldfish, what appeared to be a peanut-butter and jelly sandwich and a small plastic container with part of a granola bar.

PB & J and pretzel fish crackers is a vegetarian meal. This administration's warped semantics manifests itself even when they are being charitable. Soulless.

Spoiler alert: this should have been expected when the Sanitation Dept. was tasked to handle the logistics and distribution of this emergency program.

Communism is not what all cracked up to be.

Garcia is a fool. She has no idea what she’s doing. Diblasio is a clown. What a waste of tax dollars. Enough already...

In all fairness, some of the boxes contained vegetarian meals.
Plus, Hitler was a vegetarian.

Disgusting on so many levels. Paying NYC taxes is like contributing to a terrorist organization. You are better off with a centrist government that actually delivers on limited social programs than this horrible progressive government that can't manage anything well.

People are missing the point. There are so many city employees who do not do their jobs. They’re lazy and can’t get fired for not doing their jobs. There was a journalist who followed Park’s employees and they did absolutely nothing. Couldn’t get the rank and file to get a park space cleaned.

Me: I broke my arm.
Dems : Its because of covid
Me: But I tripped over a rock
Dems: Then its Trumps fault!

These delivery people really get screwed for what they do to help people. They make minimum wage, walk 4, 5, 6 floors of steps in this heat and the freeloaders & elderly tip them 25 cents to 1 dollar,if anything at all.
Sometimes they want it dropped on the kitchen counter to lazy to carry from doorstep!!!
Some poor smuck likely said "Fff this" dumped it and quit.

I do not understand what is happening with the Sanitation. I heard that the budget was cut, which is why the DSNY no longer picks up public trash can garbage on the weekends. Thank God household pick-up hasn’t been affected, at least not by me. But the dumping situation is out of control. I have contacted my local officials, and they say they are working on it, but clearly something is wrong in the DSNY world. Well, in the NYC govt world. I do not understand why the city is turning a blind eye to public dumping during a Pandemic. Picture it: household trash (furniture, etc) plus tons of food litter that people throw on the pile, and the usual gross stuff like used condoms, bags of urine, full diapers, drug paraphernalia... I used to just call 311 and the pile would be collected within a day or two, but apparently this is no longer an option. I thank the actual DSNY workers who are working hard. But something is clearly wrong with the leadership.

Such a waste of food, but this administration is all about waste. while police and other departments are being forced to cut their budgets, other pet projects survive, like Chirlaines mental health initiative

Taxi drivers were paid to deliver this. They figured out a scam and dumped them. Third world tactics when you hire third world people.

Welcome to Warren Wilhelms utopia where everything is for free. This idiot mayor and the city council are pissing away your money like there is no tomorrow.

Meanwhile the UN Says 10,000 Kids Dying of Hunger Monthly Due to Coronavirus Restrictions.

Terrible waste of food especially when people still stand on lines to get food.

Who did this? Warren Wilhelm the incompetent and it's never my fault mayor and the dumber then dumb city council.

"Dumber then dumb city council" YES & NO : They are dangerous taking our God Given rights away one at a time and taxing us to death. Get out before it's too late NYC is toast.

I’m not joking when I found a large box with the NYC GetFood logo left on my doorsteps. Opened it up and there were clear plastic boxes filled with food!

I have no idea when it was left on my doorsteps and if the food had gone bad.

The We Foundation said...

Thanks for Sharing-------The We Foundation is an Non-Profit Organization in India we are working for Crisis Relief for hungry poor and homeless people. Our mission is simple - no one should have to sleep hungry. An appeal to donors, investors, and communities to come together to respond to this crisis. With your help, we are doing our bit. Donate to Crisis Relief Fund