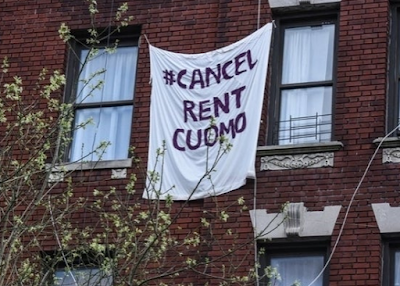 
The New York City housing market is in crisis as tenants are unable to pay their rent due to the coronavirus pandemic, according to a new report from Bloomberg Businessweek.

A quarter of the city's renters have not paid rent since March, the report said, citing information from the Community Housing Improvement Program, which represents landlords of rent-stabilized buildings.


As renters fail to pay, landlords are lacking funds to pay their own bills, so the city could see hundreds of millions of dollars in delinquent property tax payments, according to the Bloomberg report.

Dam, all these landlord are going to be forced to cave in to a section 8 contract or go bankrupt. Either way the government gets control of the property.
What the mayor has done will be impossible to enforce evictions and the cockroaches will riot and burn your home down if you try to evict a black or brown person.
Communism is here, the dirty Mayor and City council are about to flick the last dominoes.
Perhaps communism is what stupid voters and those who stay home watching TV saying "Naa never happen" during local elections deserve.

So what do you expect?

If you eliminate the middle word, that banner makes MORE sense.

This is the "Playbook" destroy the American Middle Class.
They paint silly slogans while real people die violently in N.Y. again and again.

Here comes the request for "federal aid" to clean up the mess THEY made. No way No How.. Bs.

The Democrat cities are finished. They don't have any money to pay the Police (or their pensions). They will be replaced by Antifa and BLM goons. Insurance companies will pull out, I'm surprised that they haven't already. If you are a Republican, get out, period. The Democrats are crazed animals now, do not think this will somehow "pass".

If the renters are getting temporary rent amnesty, then it stands to reason the landlord should also. But city hall needs money to pay for salaries, bennies,retirement. What product except service does deblasio have to sell? Nothing,and btw,the product called police has been put on a shortage.

It took a lot of New Yorker's to put Cuomo and DiBlasio into office. So, who's really to blame?

No Surprise. The minute an eviction moratorium was declared those who grew up on Government Benefits, stopped paying their rents. They know there will be massive back rent payments. These are the people who don't pay their rent around Christmas, Easter, Graduation. They use the rent for holiday presents, travel and parties. A child in the home guarantees that a tenant will get back rent paid by NYC. Immediately after Hurricane Sandy co workers and acquaintances were calling me and telling me to apply for the FEMA money.

Looks like the landlord's attorneys will be making money but I highly doubt the majority of these people will be evicted.

Remember the NY Times Magazine series about the homeless girl, Dasani? Except she really wasn't homeless. The city paid for their housing, an apartment in the shelter and the parents got an inheritance that they blew on drugs. The many children they had but couldn't support were their ticket to housing.

I've paid my rent. A lot of the people who have not paid rent are running a scam. sad to say. but every legal aid will be available to them.

""If the renters are getting temporary rent amnesty, then it stands to reason the landlord should also""

A version for landlords exists ---but its a horrible deal with a big catch.
The landlord must agree to a section 8 contract, the city then forgives your hardships, some taxes, brings you a Section 8 tenant and pays the rent for them.
In the contract the city can also walk into your home at any time, snoop around, say its not "diverse enough" call you a racist and select new tenants for you. --and if you sell the house the new buyer must continue the section 8 contract which now in NYC 2020 will be attached to the property for life.

Its all being engineered under the guise of this virus emergency to force homeowners OUT of NYC or 2:Embrace socialism and diversity in your home. This same thinking was indoctrinated in northeast Europe at gunpoint after WWII with help from the Soviet Union (they took the guns first)
Same shit today, just replace WWII with a virus and Russians with a Democrats.

Its all being engineered under the guise of this virus emergency to force homeowners OUT of NYC or 2:Embrace socialism and diversity in your home. This same thinking was indoctrinated in northeast Europe at gunpoint after WWII with help from the Soviet Union (they took the guns first)

Want to add that, that is why AOC, the democratic socialist, needs to be VOTED OUT (but she is still got voted in!). Many ppl in nyc wants free stuff because they never owned stuff or appreciating assets. I was registered as a democrat 15 years ago but never believe in socialism, but as time goes on especially recently, I found my views shifted towards the center and more bipartisan. Maybe because of these dem-socialists? I say they should break off and create their own third party call dem-socialist party as they give the rest of the democrats who doesn't believe in their far-left views a bad name. If a republican mayor comes along to and able to clean up deblashito's mess, like how guiliani did for time square (although I lost some respect for him when he had to kiss up to trump), I'm all for it.

There is no longer a voting base in NYC for a centrist or Republican mayor to come in and clean things up. This round of white flight now includes Asian flight. You are left with hipster whites that vote far left, and the traditional blue voting minorities that make up a majority of the city. Staten Island won't win a mayorial election.

The treachery of the Left Mob knows no bounds.

My daughter is an avid Progressive and is very active in that party. She said that almost all are going to vote for Jo Jorgensen. Biden might be in for a rude awakening.

Not sure about that, all Guiliani did with Times Square is copy what the RICO act did to Las Vegas. Now you have one big Fffing overpriced Disneyland catering to tourists. The street Hookers & pimps have been replaced with thugs in Spiderman, Batman costumes,. naked cowboys hawking people for money.
You have all the same shit & corruption from different assholes.

"My daughter is an avid Progressive"
You have my condolences, take her to a doctor she may need medication.
Thank the educational institutions and all the ex drug addict, dope smoking hippie fag teachers for that.
I personal know a college professor, he used to make acid in the 60. Now he teaches at NYU.