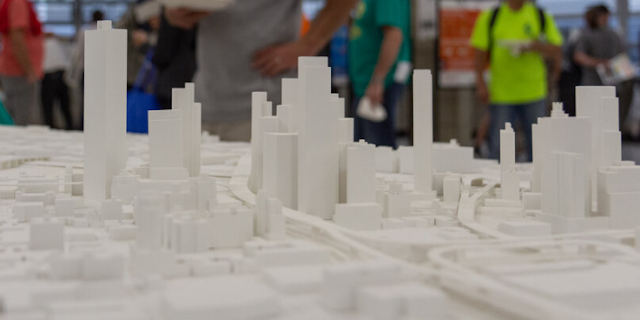 
A public meeting Monday on the controversial Sunnyside Yard planning process featured plenty of community engagement, including dramatic opposition from opponents of proposed mega-development six times larger than Manhattan’s Hudson Yards.
The early portion of the Monday meeting, the third public hearing on the massive development plan, remained calm and organized as attendees milled about information stations.
But members of Queens Neighborhoods United and other organizations that oppose the project soon took over the room, denouncing the plan to elevate the 180-acre yard from a sprawling network of train tracks to a brand new neighborhood, complete with housing, transportation and stores. Some activists stood atop cafeteria tables to address the attendees.
“These are plans made by property developers, plans for property developers,” said Rutgers University Professor James DeFilippis.
“We don’t trust this process,” opponents chanted, while others shouted “Let us in,” outside the cafeteria as they tried to enter the meeting.
“#EDC employees didnt know what to do w/ themselves as we took over the #SunnysideYards public EDC meeting. They presented nothing new, nothing solid. #SSY will cost more than the $22 billion and take longer than the 100 years they're projecting. That's our money & public land!,” QNU later wrote on Twitter.
Even before the first public meeting regarding Sunnyside Yard in October 2018, community members raised concerns about displacement and accelerated gentrification related to the neighborhood-building initiative.
“I haven’t come across anyone in Queens who thinks this is a good idea,” steering committee member Melissa Orlando, executive director of Access Queens, told The New York Times last year. Orlando, whose organization advocates for better public transportation, said the project could increase congestion.
A line of people snaked around the schoolyard of Aviation High School in Sunnyside ahead of the meeting, as representatives from a host of city agencies and the New York City Economic Development Corporation prepared to explain the draft of the master plan.
“I’d like to see the creation of the things they say they want to create, essentially liveable neighborhoods, better connections across Queens, transit infrastructure, mixed-income housing, mixed-use development, and pedestrian-friendly neighborhoods,” Gideon Shapiro, a historian of urban planning and architecture, told the Eagle.
Posted by JQ LLC at 7:04 AM

One hundred years?
Is there another article someone could point me to which specifically discusses the cost and time frame?

Mitch is an active participant in pushing back at these "dog and pony" shows, as he calls 'em. And bless him for that much needed community service.

Protest or no protest, this was a done deal long ago. In the end, developers will get exactly what they want and no one will stop them. Since the residents in that area have been voting exclusively for Democrats for the past 70 years, they can also thank their elected officials all of whom are eagerly and completely on board with this plan.

You have to get after not only your LOCAL electeds, but you need to start to reel in the community boards which are filled with people who have no real interest within their community save their programs lavishly supported by the local pol .... who in turn is funded by developers.

Exhibit A: Talked to a local community board person and asked him why they approved a towering building on a block of 3 story buildings which the local community did not want. He replied- "its near a subway." Translation: "I don't give a sh#t about what the community wants, I here in ensure funding for my program."

@Harry Bingham IV
Thank you Harry !
"Protest or no protest"
Like me with Queens Quiet Skies fighting the FAA !
Changing the political direction for a better NYC will take a long time.
I for one will be leaving soon for greener pastures.
The Jet Noise and air pollution caused by Next-Gen is horrible in Bayside/Flushing.
Since 2012 when the LGA flight patterns where changed life has been terrible.
7 years of Jets flying over our homes and all the elected officials give us is a song and a dance about change.
Term Limits are not helping as much as I thought.

Mitch is an active participant in pushing back at these "dog and pony" shows, as he calls 'em. And bless him for that much needed community service.

I believe a program he is involved gets funding from Jimmy. Jimmy is against the Yards.

Hi, Mitch Waxman here. Jimmy has been consistently against the yards plan, yes. My opposition to the project, however, has little to do with his or any elected’s opinion. This $22 billion boondoggle which the Dope from Park Slope appropriated as his own from Bloomberg’s right hand man Dan Doctoroff is a Queens Killer. Simply put, the infrastructure (of all types) in Astoria, Sunnyside, Woodside, and LIC cannot handle the population we have now, let alone the residents of 24-36,000 new apartments. Within a week of the Mayor announcing this plan, I was publicly decrying it. Did you know that Sunnyside Yards is a NYS Superfund site, and has been named as potentially responsible party (active water polluter) by the Feds in relation to the Newtown Creek Superfund site? Did you know that EDC has a less than stellar track record under the leadership of James Patchett? Staten Island Ferris wheel, anyone? Industry City? East New York rezoning? Far Rockaway rezoning? Amazon? I agree with the statement to listen to the Anti Gent people, and to Justice 4 All coalition, and Queens Neighbors United. Listen to EDC and the REBNY people too. Form an informed opinion, since these people want to borrow $22 billion in your name, which you and not they will have to pay back with interest.

So deFaustio is bigfootin' another person's idea/project again. The only thing he's competent at is idiocy.

The EDC should be abolished, and Patchett and Doctoroff under a different era would have been catapulted from town for their lousy ideas. But seriously, those two are dangerous.

Thanks for writing in Mitch.

Thank you, I have just been looking for information about this topic for a long time and yours is
the best I have discovered till now. But, what concerning
the bottom line? Are you positive in regards to the source?

It would be for the wealthy only— just like Hudson Yards. Kill this plan immediately.

If you want to see the yards go to Hudson Yards - toured the 'Shed' recently and noticed the cracked concrete, movable outer walls (does anyone know a stadium dome that works), precious imported Italian steel (what, the Rest Belt ain't good enough for you?) the plastic facade, the odd wet spots along floor sections, the embellished concrete already scuffed after a few months, and the ever so precious oohs and aahs from the assembled notables.

The Vessel is another joke. Wonder how long it will be open next to the corrosive salt breezes from the river and as a beckoning suicide platform with its crazy quilt of overhanging platforms.

Well, while they play and experiment on our taxes, the building will be a nightmare to maintain. Not to worry, its public land. That means that this farce will be maintained by your and I for quite sometime.

And the rest of the complex, a dead zone of high-rises inhabited by absentee Middle East potentates and Russian oligarchs with silly empty stores advertising expensive merchandise.
This place represents everything that's wrong, including every criticism heaped upon it by everyone except the self appointed arbiters of taste.

Interesting that the Anti-gent people are opposed to Jimmy for reasons obvious to the informed. And, ah, they don't get funding from him either. So there is no potential for a conflict of interest with their perspective.

The good thing is that they, as well as a growing list within the community at large, are also quite distressed at how the local political establishment, despite the Amazon dust up, and along with the community board front men they appoint, seem to be approving one project after another with scant concern for infrastructure. For every big project they protest in the headlines, dozens of smaller ones get routinely stamped 'go' under the media's radar.

The distrust for officialdom is growing with every block busting monster sprouting up seemingly in every back yard.

Back in the day they had an expression for it: Credibility Gap.

"What difference does it make" HRC
It's a done deal sheeple !

I'm not sure why building for the wealthy is bad. Do you really want to live next to poor people?

Why doesn't the opposition just propose an alternative? They should come up with a design, funding plan and scale model. It is a lot easier to counter an idea if you have an alternative.

Apparently Mitch, the pro-GENT/YIMBY crowd is quite active here on QCjust check this other post re: LLCs having their identities revealed, and two crybabies worrying they won't be able to sell out and ditch the City eventually as rich as they might have been, clearly

Hey Crappy, why don't you do a feature on the local community Facebook accounts?

Look at their comments.

That pretty much sums up how the locals feel about development.

I'm not sure why building for the wealthy is bad. Do you really want to live next to poor people? ****

What is wrong with poor people - the key is being a good neighbor and that is not contingent upon wealth but character.

For example, you would not want to live in Hudson Yards either, which resembles a compound for rich Russians, Latin American poobahs, Chinese operatives, and Arabian potentates - and that is what they are proposing for Sunnyside Yards (according to those following the development).

Walk around mid-town at night and look up at the dark towers. THAT builds community, eh?

Let me first state that Mitch Waxman is a first-rate blogger and photographer. However, Jimmy being "against the Yards" means nothing. The only reason Jimmy has this position is because his envelope wasn't thick enough. A few more bucks and Jimmy can be for whatever you want.

This is a guy that took 10 months to "return" a contribution from real estate interests.