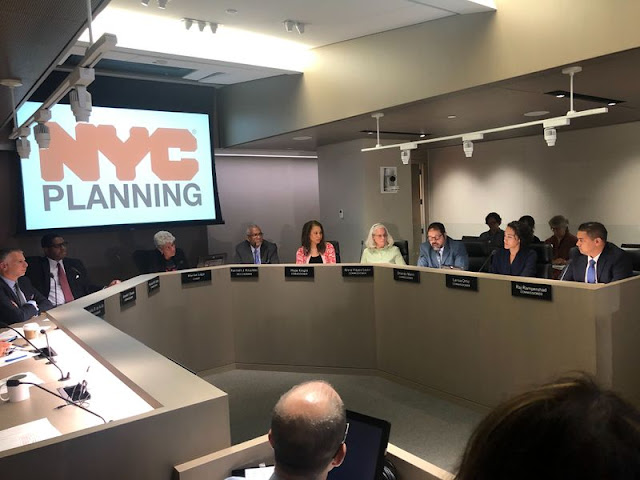 The City Planning Commission voted in favor of a plan to build four borough-based jails on Tuesday — bringing the city one step closer to a Rikers Island shutdown.

Nine of the 12 CPC commissioners moved to approve the Uniform Land Use Review Procedure (ULURP) for new jail facilities in lower Manhattan, Kew Gardens in Queens, Downtown Brooklyn and Mott Haven in the Bronx on Tuesday during a special public hearing, paving the way for a City Council vote on Thursday.

Commissioner Allen Cappelli, who voted in favor the ULURP — a mandatory land use procedure that requires CPC approval before heading to City Council — told reporters after the hearing that their decision was a step in the right direction.


“We need to have less people incarcerated…but there are going to be people who need to be incarcerated and we need to make those places as humane as possible,” Cappelli said.


“I think most of the Commission had issues with (the ULURP). This is a design-built plan, which means the final design…is still in play,” he added. “All things considered, closing Rikers Island is the main priority here. So many of us, (apart) from some minor objections, decided to move to Council.” 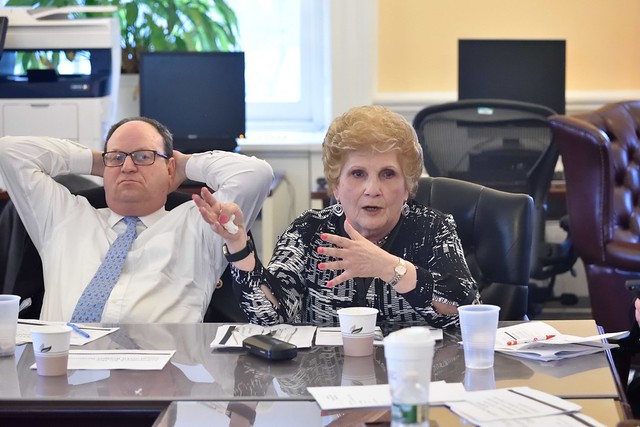 This is the stupidest thing I've ever heard. Imagine if there is an attempted prison break and sirens have to go off in the middle of the night? Also, where in Manhattan and Brooklyn are you going to fit a jail? It's way overcrowded as is it in those 2 boroughs. Mayor dumbdumb wants to build more luxury apartments on rikers island and that's a real joke when its proven that half the apartments who ask for too much income are laying half empty already because not enough people make even remotely close to the "income requirements". This plan is the stupidest thing and mayor dumbdumb is the king of stupid!

Of course the fix was in. Rikers Island is needed for real estate development.
Corruption galore.

What are the qualifications to become a Commissioner?

Those communities wanted this. They kept voting for the same old career hacks, and their party line voting bit them in the ass. You would have to have a heart of stone not to laugh at them.

Unfortunately we’re all F*cked!!! Our voices don’t matter, our opinions don’t matter, but what we can do is fight for and support our 2nd Amendment. if there is a Prison break, and that / those prisoners come in our presence most likely they aren’t coming over for coffee and we will need to defend ourselves in all ways possible. Stand your ground and protect your homes, your families and loved ones. Educate the young and be diligent. This Cities politics Won’t Support it’s Own Law Enforcement, it only cares about its pockets.

K-K should be found and brought to heel over this...the Anon⁵ above re: communities wanting this is largely right, but remember there are people who absolutely don't whose voice gets drowned out by the silent/passive/stupid majority. Now who will confront Kos-slow-wits about this? The only thing that makes your local reps stop in their tracks is facing repercussions of the sort that end their career and hurt their wallets.

This Capelli idiot must think he has unicorns flying out of his a@@ instead of poop. What a complete nincompoop--“We need to have less people incarcerated…but there are going to be people who need to be incarcerated and we need to make those places as humane as possible...” Soooo, it's OK to commit crimes, but we need to have less of the perps jailed, is that right? And if we really really have to jail them, we should make it as nice as possible for them? THIS is the mush brain libtard thinking that's been destroying NYC for decades. Now Capelli, let's talk about the REAL reason you want to take prisoners from an isolated area more easily controlled and put DANGEROUS people right in peoples' neighborhoods: Comrade Bill, whose leash is firmly held by his real estate developer masters, wants Rikers as new real estate to be covered by their high rise luxury towers no one can afford. He is more than willing to endanger everyone by putting dangerous criminals right in their neighborhood so his RE buddies can make their megabucks developing Rikers.

And you wonder why hundreds of people are moving out of NYC each day?

Criminals love blocking up toilets with t shirts and bed sheets,
Just wait untill it starts raining on the heads of staff on lower floors.

And REBNY wins again. They get their island.

But this problem is deeper than any singular issue. Societyis collapsing. Our governments are insolvent at every level.

There is no political solution. It's long past time for militant nationalism.

Will KK wake up and realize that she has to live in the community? She has no career moves to worry about as she is term-limited and will probably retire when her Council term ends. She still, however, must realize that it is her community and that she, and she alone, holds the key to its future. Surely she is not so blind.

KK is on her way to Phase II at Del Boca Vista. You know after her seat at the table is over and she is done picking out the curtains at the new jail.

It’s one of the reasons I worry about term limits. An old hack like that stops caring because their are no more personal consequences for their actions or in this case inactions.

I've been watching this from afar. This no doubt another example of New York Liberal Tamanyism. Methinks that your demonstrations were too orderly, meek, and mild!

"And you wonder why hundreds of people are moving out of NYC each day?"

Called insane taxes. Rich people did not get rich by being stupid.

Liberal mentally diseased sickos created class warfare, just like the communists, but the money is good coming from the rich.

Just like Smoking is bad, but taxes from cigarettes are good!

What a frigging joke.

Term limits. Totally unacceptable that we have 2 term presidents the most, but lowlifes in congress and senate for 20, 30, 40 years.

Tell me why it is better to spread hardened criminals all over the city in less secure jails than to have them isolated on an island (...unless you want to develop the island!!!)

So what is the FIRE DEPARTMENT plan for EVACUATION when they light an entire upper floor on FIRE,MANY WILL DIE OF SMOKE INHILATION and the law suits will fly,
For my safety and the safty of all firefighter I will not go in and will tell my guys NO ONE GOES IN.
THIS HAS not been well thought out

Mr. Firefighter goodluck getting arrested with youre pals for refusing to do youre job. Once in jail everybody will know why youre there and you better prepare youre biscuits because they will get clapped by 10 inches of raw force. Ive been to jail and child molesters get their eyes taken out and treated like the filth that they are. You better follow orders or in jail youll end up.

Blue Flue or Rig Out Of Service,am not going in.

I walk outside in Nyc and its slowly starting to feel like Brazil. Im moving to california where theres half the population of nyc and everything is cheaper everybody is happy with the pounds of weed they smoke over there. And here in Nyc I get stopped and frisked because I look high. Gtfoh I was born with this face thats why I always look high. Ill quit my job in this shithole hell and go to heaven... heck ill become a vlogger in LA.

Go for it man

Everyone seems to think that the Mayor wants Riker's Island for the wealthy, it could be that they will put housing projects there instead. The cities housing projects are in very desirable areas and the land is worth billions.Also they can contain the criminal element that permeates the projects better on an island.Just a thought.

Gamorrah on the Hudson!

Hudson on the Gamorrah!

Term Limits? If it wasn't for that idiot Ron Lauder, Giuliani would be Mayor for life

Do any of these "people" live in the four boroughs or do they all live in Westchester or Nassau County?

I'm not suggesting we picket their homes but if they don't live in the areas they voted for the jails to be built, then their vote should be negated.

This vote is a travesty of justice. NO ONE WANTS THESE JAILS IN OUR NEIGHBORHOODS. Why aren't they listening to what the public wants?
'