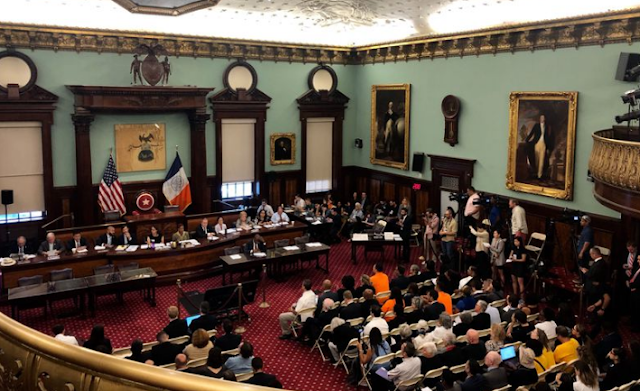 De Blasio administration officials are offering too little information about when and how inmates would be moved from Rikers to the four new jails, in the Bronx, Brooklyn, Queens and Manhattan, said City Councilman Keith Powers (D-Manhattan), who leads the council’s Criminal Justice Committee.

“There are communities here obviously concerned about what the plans are in their district," Powers said before more than 300 people at the first City Council hearing on de Blasio’s plan.

“I think it’s a little unfair for us not to have information about what phasing will be like and what the plan will look like .... We’re here at a land use hearing to talk about this and we don’t have clarity on which of these districts will get the facilities in what order.”

“I think it’s a little unfair for us not to have information about what phasing will be like and what the plan will look like,” said Powers.

Another council member wondered why the plan’s estimated $8.7 billion cost was staying level even though de Blasio administration officials have lowered the new jails’ estimated population from 6,000 to 4,000.

“Now that the population has been reduced to 4,000, what is the updated estimated cost of construction? Is there any particular reason why that figure remains the same (now) that the population has decreased?" asked Council member Adrienne Adams (D-Brooklyn), chair of the Landmarks, Public Sitting, and Maritime Uses subcommittee

Jamie Torres-Springer, first deputy commissioner of city Department of Design and Construction, had no answer to Adams’ question. “The estimate that informed that budget is based on the place that we’re at,” TorresSpringer said, explaining that the official design has not yet been conceptualized.

As with the tower jails building process, city council is also taking a design-build approach to voting on it.

It will cost more like $20Billion when all is said and done and will BANKRUPT NYC!

Yeah the city starts off with a rough estimate and then all of a sudden by the end of the project, it cost about 2 to 3 times more than that rough estimate.
We all know that rikers will just be turned into a waterfront property that will be exclusively for non middle class workers. It will either be for the poorest of the poor or for the richest of the rich. Either way their "affordable housing" guidelines dont make much sense to begin with. Meanwhile, the same rapist who just raped a 13 year old girl will now be living right next door to your 13 year old daughter and the second he gets out of jail, he will be now following her. What a wonderful mayor we have who protects his own pockets rather than the members of society!
Also, I'd like to know, if we are having enough trouble creating housing for middle income people, then where is the space in each borough going to come from to build massive facilities to house criminals?

I say it will be 30 billion so that Italian Gambino Mafioso Diblasio can keep 10 billion in his pockets and laugh at how dumbed down New yorkers are.

Did you ever think maybe that's The Plan?

Abolish the entirely useless, New York City Council, altogether (along with ALL Borough President lackeys and the worthless Public Advocate): They are all corporate owned, operated and obedient, and they betray all pretense of public trust, ethics, integrity, ACCOUNTABILITY and transparency, with a vengeful impunity that remains unprecedented, to date. And, the public be damned! They also continually bleed the already oppressed New York City taxpayer——to morally reprehensible effect!

My own feckless city council-crud refuses to meet with me, IMAGING THAT! This isn't a democracy, its a money laundering Ponzi scheme for which even ACTUAL crime family rings worldwide could not rival, much less surpass! They DEVALUE honesty itself!

They are also the reason for why vigilantism and lawlessness are on the upward rise, when lawlessness is the breeding point in the filthy corridors of abused, unearned and undeserved power in City Hall, Albany ('CUOMIGULA' terrain), and BEYOND!

❝The system cannot be fixed by the system.❞ ——Daniel Dennett

❝A people who elect corrupt politicians, impostors and thieves are not victims ... but accomplices.❞ ——George Orwell

❝Dear America: You are waking up, as Germany once did, to the awareness that 1/3 or your people would kill another 1/3——while 1/3 watches.❞ ——Werner Twertzog

❝The only thing hindering all out revolution is your fear of losing the scraps they throw at you.❞ ——Gore Vidal

❝Nobody in the world, nobody in history has ever gotten their freedom by appealing to the moral sense of the people who were oppressing them.❞ ——Gore Vidal

❝No man will ever be free until the last king is strangled with the entrails of the last priest.❞ —―Denis Diderot, French philosopher


❝There is no polite way to tell people they've dedicated their lives to an illusion.❞ ——Daniel Dennett

With all the undocumented flooding in your going to need 5 new jails And
RICKERS.

I would say $20 billion is about right. Why is it so hard for the elected councilpeople to understand this boondoggle and all of their constituents get it right off the bat. Answer: A lot of money is changing hands. Keep voting in Democrats and you will be the highest taxed people in the country, paying for all this unneeded crap! Oh! I'm sorry, you already are!

To keep my post short and to the point New York City Voters are the biggest Schmucks in America for letting this happen !

Has anyone written about how much of the testimony during the public hearing was for "NO JAILS"? Not just "Close Rikers Island" but they want "No Jails".

>Meanwhile, the same rapist who just raped a 13 year old girl will now be living right next door to your 13 year old daughter and the second he gets out of jail, he will be now following her.

Why do people assume that criminals released from jail will all just stay in the area next to the jail? They'll go back to their home neighborhoods, or otherwise be anywhere else in the City that doesn't remind them of their imprisonment (and has less of a police presence because no jail) and commit their new crimes there.

"Why do people assume that criminals released from jail will all just stay in the area next to the jail? They'll go back to their home neighborhoods "

That's your opinion and is fine, but you do not speak for other people or the released criminals. Sugarcoating with pipe dreams this HUGE SCAM does not make it right.