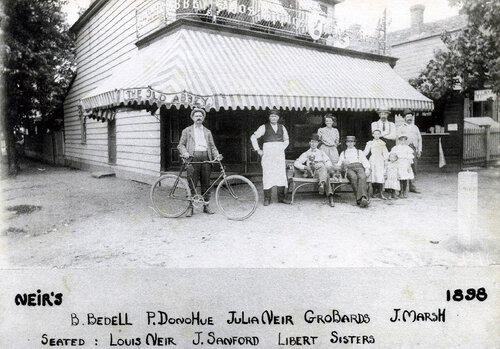 
A Woodhaven watering hole will be celebrating its 190th anniversary on Oct. 5 — making it older than more than half the states in the country.

Neir’s Tavern has been around since 1829, beginning the same year that Andrew Jackson became president. Called the Old Blue Pump House at its inception, it became Neir’s when Louis Neir bought it in 1898. He added a bowling alley and hotel, and even ran the place as a speakeasy during Prohibition.

Neir’s changed hands several times up until 2009, when Loy Gordon, an FDNY lieutenant and the current owner, bought the bar along with some friends to save it from closure.

The claim that Neirs has been in business 190 years comes from the owners who have a stake in making that claim. The building itself is either a different building than what existed in the late 1890s or was so extensively modified that it looks nothing like the present structure. Look at the 1898 picture and then a picture of the building today. No one would say that looks like the same building. The owners do a good job of getting publicity for the place based on the claim that it's been operating continuously since 1829 but there's little proof that it's the same building. Also the owners of Neirs do not own the building, which was recently sold. The place does have an interesting history but someone independent of the owners needs to document the actual history of the place starting with when the present structure was built. I lived in Woodhaven in the 1960s and 1970s and never heard of the place.