President Trump's Opportunity Zones program are just opportunities for him, his advisor Jared Kushner, real estate developers and oligarchs to take advantage of 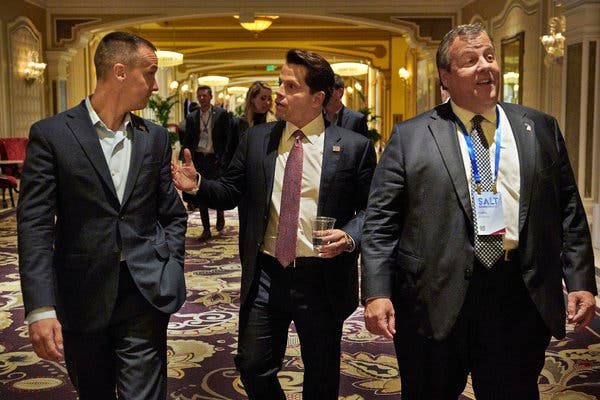 President Trump has portrayed America’s cities as wastelands, ravaged by crime and homelessness, infested by rats.

But the Trump administration’s signature plan to lift them — a multibillion-dollar tax break that is supposed to help low-income areas — has fueled a wave of developments financed by and built for the wealthiest Americans.

Among the early beneficiaries of the tax incentive are billionaire financiers like Leon Cooperman and business magnates like Sidney Kohl — and Mr. Trump’s family members and advisers.
Former Gov. Chris Christie of New Jersey; Richard LeFrak, a New York real estate titan who is close to the president; Anthony Scaramucci, a former White House aide who recently had a falling out with

Mr. Trump; and the family of Jared Kushner, Mr. Trump’s son-in-law and senior adviser, all are looking to profit from what is shaping up to be a once-in-a-generation bonanza for elite investors.

The stated goal of the tax benefit — tucked into the Republicans’ 2017 tax-cut legislation — was to coax investors to pump cash into poor neighborhoods, known as opportunity zones, leading to new housing, businesses and jobs.

The initiative allows people to sell stocks or other investments and delay capital gains taxes for years — as long as they plow the proceeds into projects in federally certified opportunity zones. Any profits from those projects can avoid federal taxes altogether.

“Opportunity zones, hottest thing going, providing massive new incentives for investment and job creation in distressed communities,” Mr. Trump declared at a recent rally in Cincinnati.
Instead, billions of untaxed investment profits are beginning to pour into high-end apartment buildings and hotels, storage facilities that employ only a handful of workers, and student housing in bustling college towns, among other projects.

Many of the projects that will enjoy special tax status were underway long before the opportunity-zone provision was enacted. Financial institutions are boasting about the tax savings that await those who invest in real estate in affluent neighborhoods.

Yeah, this has been done before, Hudson Yards, Pacific Park, that stupid mall in Staten Island, but that was through insider chicanery and machinating. This is now the law of the land that was once made for you and me.

Upon seeing this photo the first word that came to mind was " cabal ". Hope everyone knows now why Trump won't release his tax returns. " Taxes? " I don't need no stinking taxes !"

Turns out Trump IS the swamp, and he is never going to "drain it".

No surprise, he learned from Poppa Drumpf how to game the system, and never met a business he couldn't run into the ground and bankrupt. It'll be interesting to see how much commentary this article gets, since it's the usual QC-peanut-gallery narrative booster. This city needs far less professional luxury residence management companies and a return to (non scummy) small and medium sizes landlords...

All of the above:

What I really like about that photo is that those 2 greedy bastards on the right are currently "feuding" with the president. Notably the ingrate Scarramuchi, whose making off like the plutocrat bandit he is. Trump has turned political infighting into WWE episodes with heels and faces. Surreal.