Homeless couple occupying and defecating on LIE overpass in Maspeth. 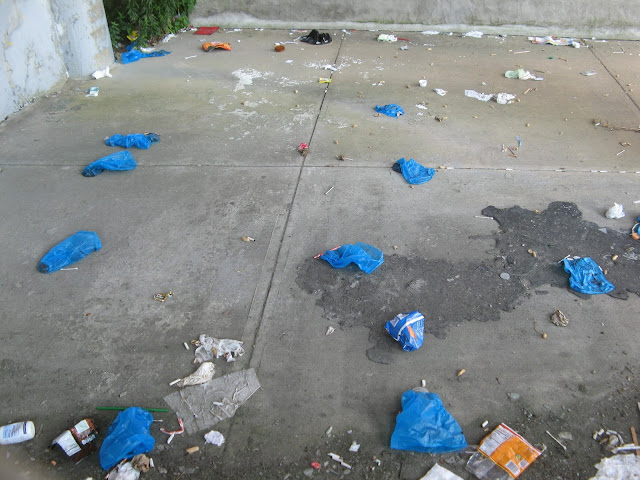 Crappy I have a real crap story for you.All summer a homeless man and woman had set up camp on   the LIE  pedestrian overpass at Mazeau St.in Maspeth.They had a pitbull that was scaring people and there were fights with other dogs.The 104 Pct. community affairs officers talked them into surrendering the dog to a rescue group and tried talking them into moving to a shelter.They wanted to remain together so they declined the offer.In July a woman was robbed of her money and phone on Mazeau Street near the overpass at 2:30 in the afternoon  but could not identify  the robbers just that it was a man and woman.We later found out the woman on the overpass has an arrest record in Florida. 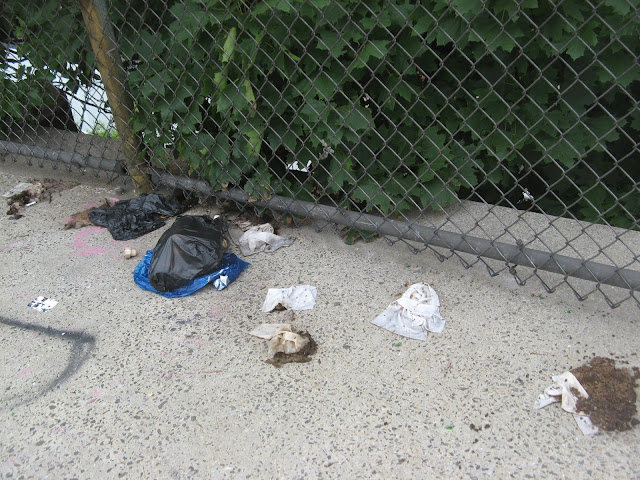 In the begining of August the garbage and vodka bottles and other trash was accumulating on the overpass but the best was the crap.They had been crapping on the overpass along the fence and also throwing down to the ground level their plastic bags of crap.The temps had been in the 90's and the crap was cooking in the heat and a home was close by.

I called 311 on 8/5 and they said that NYCDOT will handle it.A few days later I get an emai saying it's not their job and I should call NYSDOT.Calls were made to local politicians Finally on 8/21 Dept.of Homeless Services long with Sanitation Dept.cleaned the garbage and crap and offered the couple shelter.
They were gone one week and then came back and set up camp at the same location and yes the crap is flying again.
This overpass is used by people of all ages and they don't feel safe crossing with these two living there.What the city will do we don't know.
Posted by JQ LLC at 9:34 AM

Hey Crappie!
Your attention is drawn to this posting on the COMET website in June:

http://www.cometcivic.com/newsletter/fyi-homeless-couple-with-dog
Note that is states that the couple is allowed by law to occupy this space--OH YEAH? What about creating a health and safety nuisance. So they finally "agreed" to go to a shelter???
Lock'em up, ship 'em out back to Florida to live out their lives with drink and drugs 'til a premature demise!!!

I've been driven far beyond sympathy for this crap in my City...and my neighborhood!
I am devoid of humane feelings when it comes to this homeless crap on our tax dollar here.

A photo of the couple would help. If they are really such a nuisance it should be easy to get a picture of them.

From Florida? They should be heading to warmer climate soon.

It astonishes me that they're allowed to continue this. It would be so easy to get their DNA from the crap. If the NYPD wants to go that far. I wish they would re-open Kings Park - have a place for people like this. Clearly these individuals can not take care of themselves. It's one thing to be homeless, you have my full sympathy. but to throw bags of feces down is a criminal act and indicates serious mental illness.

I thought I read on the Maspeth Facebook page that this was cleared up?

That COMET Post is from last month. They came back.

My source says they returned. And from the looks of it they are more crazier because that Comet post was barely two weeks old.

Kings Park is full of asbestos. Otherwise it would have been torn down and made into tract housing.

Okay then if not Kings Park, build another secure mental health facility for the sick and suffering such as the above. Assisted Living is not enough, anyway it's another landlord's scam.

Wow, just like California.
I cant imagine how much worse it would be if Amazon was allowed to make their mess.
This is gonna get worse too, all the bums & illegals are coming to New York thinking they will get free stuff from deBlasio. They don't know he just tells lies !!

New york citys homeless population is increasing as I finish smoking this fat blunt I bought from this dispensary in Los Angeles. Everybody is doinv well here, people got jobs and everybody has a smile on their face. Just like me, I can't stop laughing at New york peasants while I read the news... Later ill go get a massage from a lady in which she uses cbd oil and everything is pure ecstacy and the endings are always happy. Burn in hell nyc.

What I don't get is why not put them up in the defunct Borsht belt.
Plenty of huge empty hotels and property's up in the Catskills the Jewish once used for vacation that can be had cheap.
Why must they be housed & put in the filled to capacity nuthouse's & jails here ?

COMET (for the Fall/Sept, not Aug) sez after multiple attempts they finally moved on. And somebody adopted their dog too.

Alas, there sits an unfunny clown in City Hall whose disgraced named is Bill de BLASS-hole (as well as his two 'OTHER' previous city paycheck titles of vacuous portent), who defecates on ALL of New York City every single day——even when he isn't here to stink up this toxic metropolis of entrenched corruption, graft, never-ending greed——and, now an ever herd of homeless population that keeps growing by the hour.

Get used to the stench, taxpaying suckers: As long as there is an UNACCOUNTABLE empowered idiot who has continually defecated on City Hall (and beyond), then it's time to either SOLVE the PROBLEM, or LEAVE THE PROBLEM——but, don't LIVE WITH THE PROBLEM!

❝Everything the State says is a lie, and everything it has, it has stolen.❞ ——Friedrich Nietzsche

❝The chains of habit are too light to be felt—until they are too heavy to be broken.” ——UNKNOWN

❝The Earth isn’t dying. It’s being killed. And, the people who are killing it have names and addresses.❞ ——Utah Phillips