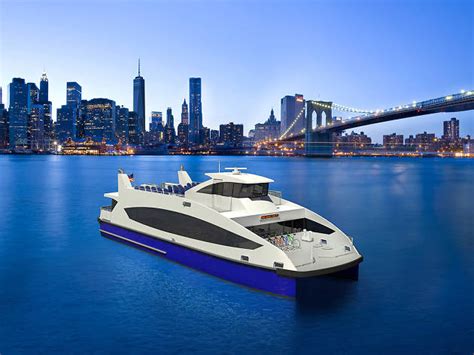 The de Blasio administration plans to ram through another $43 million in ferry purchases for its money-pit fleet — in the face of objections from the city’s fiscal watchdog, The Post has learned.


The push comes just months after City Hall forged full speed ahead with another $84.5 million purchase over the worries of City Comptroller Scott Stringer.

It swells the total amount sunk into the program to $637 million.

The decision “to deem another City tax-payer funded vessel purchase registered without providing exhaustive data, metrics, reports, etc. to demonstrate the success of the citywide ferry program and justify the ballooning costs of this initiative is disappointing,” Stringer wrote in a letter Friday to the Economic Development Corp., a copy of which was obtained by The Post.

The $43 million covers the purchase of five new boats, according to purchase documents submitted to the Comptroller’s Office.

It marks the second time this year that City Hall has exercised veto power to torpedo Stringer’s attempts at oversight of the ferry system.

The East River system is among Mayor de Blasio’s biggest transit initiatives, despite carrying only a fraction of the New Yorkers who use the subways, buses or CitiBike.

Just 18,000 people rode the ferries on an average weekday during the spring, with those trips subsidized at a rate of $10.73 per ticket.

Here's an obnoxious example of those people who use the gilded commute.


On Friday nights, revelers are turning a commuter ferry into a DJ-helmed dance party.
Helicopters buzz overhead as the East River churn bumps riders — businessmen and women just off work and metallic jacket-clad partiers alike — while beats blast from the boat’s stern.

“You see guys with suits on, chugging a beer and just dancing,” says NYC Ferry captain Ben Nedrick, as he steers the boat along the Lower East Side route.
From his booth on the boat’s upper deck, he watches as DJ Sheri Barclay mixes music for the weekly Rooftop Sounds Pop-Up.

The other week, Nedrick, 23, handed the wheel to his co-captain so he could join in the fun, breakdancing in his uniform as a soca jam played, to his passengers’ delight. There’s an almost palpable sense of cutting loose, especially on a hot summer night.

“It’s got that kind of lawlessness to it,” concedes Barclay, 36, the manager of online radio station KPISS.FM, which streams from an RV in Bushwick.

The dance parties did, in fact, begin illicitly.

“Last year, I threw my birthday on the ferry without their permission,” says creative director Franz Aliquo, 43. He and his guests rode for one round and finished all the booze on the boat before getting kicked off. This spring, he says, the ferry company reached out to him.

“They hit me up to be like, ‘You did it last year, and it was pretty dope,’ ” says Franz, who picks the DJs, and organized the events as a labor of love.
Now, the happy hours have the blessing of the ferry — and that of its concession stand, which sells a rotating variety of beer ($7), wine ($8) and snacks on-board all boats. (Passengers aren’t allowed to BYOB.)

“It gives a good vibe,” marketing coordinator Tiffani Samaroo tells The Post. She says the transit service is planning a host of other events it hopes will increase ridership, though only the Friday night 6:30 to 8 p.m. “happy hour” will have a DJ.

There’s no cover charge, just the price of passage: $2.75, the same as a subway ride — but you can’t use a MetroCard. NYC Ferry currently operates six routes and a summer shuttle to Governors Island.

Remember, the city and you the taxpayer do not get a dime from the booze sold on these ferries. All monies go to the contractor, Hornblower.

The Circle Line does the booze cruses with live bands, sometimes the people have to many drinks and puke. I assume these boats will eventually serve drinks and hotdogs so lousy Mayor can get in on the alcohol sales also.
Big boon and benefits for the $96 an hour union guys who will be working these operations.
NYC should be re-named Racketeer city, Boss Tweed would be so proud.

The people on those ferries are almost exclusively high-rise waterfront facing glass condo inhabitants. Yeah, this is totally in the general populations' interest.

Does anybody have the ability to confront this douche?

The Ferry is Anthony Wiener's Baby. I happened to see him in Central Park before he was sentenced and he reminded me that he was responsible for getting the Ferry money for Rockaway. That was Wiener's district when he was the Senator. His office was on Rockaway Beach Boulevard and Beach 91st Street.

you never run out of others people money.

I don't understand New yorkers like to bitch about high prices for services but you see them walking around with their 2000 dollar dog, 500 dollar shoes, 200 dollar shirts, 100 dollar phone case and their rent is like 4000 a month 1 studio apartment. They also pay for college and buy cars and go on expensive vacations. Like wtf where do this people get all this money from? Im sure 4 dollars for a subway ride wont hurt...

To Anon#1, these ferries are operated by Hornblower, and keep all the ticket and concession sales. These jobs aren’t city jobs, the people working on them are Hornblower employees, the captains just voted to unionize at the beginning of the year, with management and hornblower dragging their feet and fighting the union in Court. The captains are making maybe $30 a hour maybe more if you are more experienced, and deckhand $17 a hour. You are working everyday in the summer, and the benefits are average at best.

I know this cause I worked there for a year.