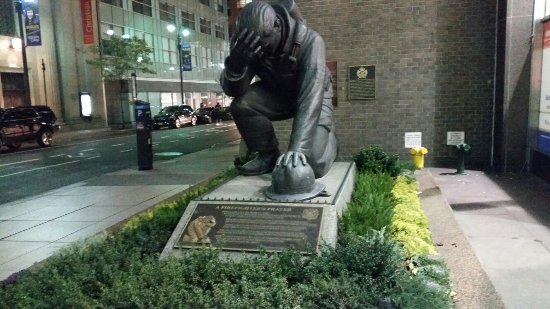 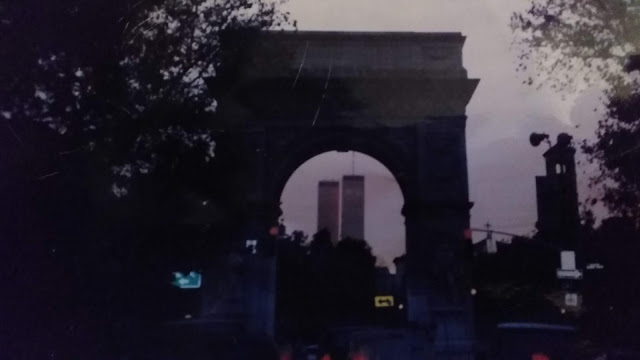 May all those who lost their lives that day as well as those who are dying every day as a result of WTC related sickness rest in peace. May their families and loved ones be comforted.

I learned all I needed to know about muslims on 9/11/01. I watched the second tower burn and collapse, scarcely believing my eyes. I locked my arms around a fellow teacher in that vacant classroom with a view of the towers, and she did the same to me. There were no words one could conjure up after watching thousands of people die. We just cried in each others' arms. I walked around the school the rest of that day with a slow but steady river of tears streaming from my eyes, just as they are now. The tears would not be denied their flow; no amount of Kleenex would stem my grief.

A dean actually criticized my waterworks and told me to stop, claiming it would "upset the students." I tried to explain that it was involuntary and I could not help it, having just watched thousands of people die a horrible death. I couldn't believe that immediately after this catastrophic event, this guy would try and be political. Those students who had 2 brain cells to rub together were also upset. Did the school administration actually think we could just pretend that this mass murder, which happened only a few miles from the school, could simply be dismissed in favor of "school routine"? That we could just turn off our tears and carry on as though our psyches were not writhing in agony? Even 18 years ago, the rot in the NYC schools was well under way.

As I drove home, heading west, I saw a thick column of the blackest smoke from hell, bridging heaven and earth at a 45 degree angle. Nothing is black like that, burning aviation fuel. The skies were seemingly full of--gulls? No, it was actually fluttering Xerox paper of the purest white, liberated from offices ripped open by the carnage. Perhaps they were stand-ins for the souls of the victims rising to their heavenly destination. Every radio station endlessly intoned what was known at the time of the planes in NYC and PA, the twin towers and the Pentagon. It was too much to bear, like living in a crypt. The whole city was blanketed in a miasma of death. I called some dear friends in Baltimore to tell them I was coming, threw a couple things into a bag and took off down 95 S in search of some loving arms and relief from the droning radios.

One would think that such a devastating event, the largest mass murder ever on American soil, would be indelibly engraved on American minds. Sadly, it has been displaced. Such important things as Kim Kardashian's ass, the latest obscene song, getting high to get through your day, and throwing ice on yourself have shuffled to the top, obliterating the incredible evil done to us.

This is how we got the likes of Ilhan Omar and Rashida Tlaib in our Congress, muslims who daily spout their hatred of our country, of Israel, and of Jews in general. These two have already been documented meeting with members of terrorist groups and trying to funnel taxpayer money to them. For my money, it's only a matter of time before they try something else. I hope security scans them well before they sit down with other members of Congress, that's all I'm saying.

George Santayana gifted us with this immortal quote: "Those who cannot remember the past are condemned to repeat it." Should we drop the ball and allow the memory of what was done to our country, to 3,000 innocent people--and who did it--to fade, I fear we will suffer another such catastrophe.

RIP. Recognize the government does not CARE about 9/11 first responders, their families, or the thousands of naive people sent off to die or come back crippled in an endless war that enriches the Military Industrial Complex.

Why does it take the comedian Stewart to get Congress to do something that should've been done nearly TWENTY years ago?