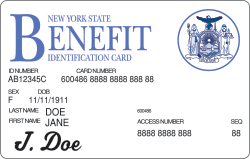 Thanks to a lack of oversight, the state Health Department doled out $1.3 billion in six years in Medicaid premiums for people who were already enrolled in other comprehensive health plans, according to a new report from state Comptroller Thomas DiNapoli.

The report found that the state Health Department is not quick enough to disenroll people when they sign up for coverage with another insurer. The overwhelming majority of those funds—about $1.2 billion—are not recoverable.

"Glitches in the state Department of Health's payment system and other problems led to over a billion dollars in unnecessary spending," DiNapoli said. "The department needs to improve its procedures and stop this waste of taxpayer money."
Posted by Queens Crapper at 12:09 AM

Did you just assume my gender?!

That's why my taxes keep being raised.....incompetence and corruption. Hmmmmm.....rather than be stuck in the middle sandwich...maybe I should go bankrupt and get on the welfare roll....Medicaid and all! I could sleep late too! No job pressures.

Back to work prole.

Another example of you never run out of other people's money.

Good - This is the tiny tip of the iceberg. Time to investigate HRA- Medicaid much more closely.

An illegal alien from Pakistan, China, Iran, you name it - have more rights to a job at HRA/Medicaid then an American born in NYC. Talk to Stephen Banks - HRA Commissioner about this since he has his head up DeBlasio's ass. Banks doesn't want to know about any fraud committed by city employees.

One of the many, many problem is that the HRA/Medicaid employees go to work drunk, high, get high, drunk on the job and feel a civil service job is their reparations for slavery. The union shop stewards spend the day photo copying flyers for their church, political activities, children's homework or side business's.

Medicaid's directors and supervisors, PAA's are across the board black women and now, from the Caribbean. They raise through the ranks on Affirmative Action and their leadership style is styled after Idi Amin. There are very few males and white Americans employed at Medicaid. If you are white you are not welcome there unless of course, you participate in the scamming, the fraud.

Chinese HRA employees are excellent at shaking down Chinese speakers. Chinese people can switch around their names and get four of five benefits because no one bothers to investigate that Shin Peng Ji is also Peng Ji Shin or Ji Shin Peng for example. Oh is that racist? That's for real.

The hostility towards Americans and hatred for this country is out in the open at Medicaid. The employees complain when they get raises, complain about taxes , complain about life in the USA. See, they have plenty of time on their hands because they're not working.

They smoke marijuana on the job, doing as little work as possible. They are driving up the costs of Medicaid. It's a crime.

Do you work there? You’re one of them as well. Why don’t you speak up? Because you are doing the same thing. Working a government job and a slacker.

As long as the stupid taxpayers keep ponying up the dough, don't pay attention to a bit of corruption here and there.

Allow me to quote the great Hillary Clinton, "...this is all part of the vast right wing conspiracy..."

Chinese HRA employees are excellent at shaking down Chinese speakers. Chinese people can switch around their names and get four of five benefits because no one bothers to investigate that Shin Peng Ji is also Peng Ji Shin or Ji Shin Peng for example. Oh is that racist? That's for real.


Allow me to fix it for you so that the politically correct can only label you as a general racist, rather than an anti-Asian as well.

"There have been unfortunate instances where Asian individuals have been guilty of Medicaid fraud. For example, one individual may open multiple cases using one name in a different variation such as, Shin Peng Ji, Peng Ji Shin or Ji Shin Peng. We must work together as members of the same community to fight against such rampant misrepresentations."

The MTA is also infested with these Caribbeans. They are slow, smoke marijuana on the job and don't give a shit also. Key and spit you car in the employee lot if your white also. My friends a machinist at the Coney island train shop he cant take a nice car to work they keyed his nice vintage Cutlass bumper to bumper twice.
Yes they have all these special protections to goof off, be racists an not get fired