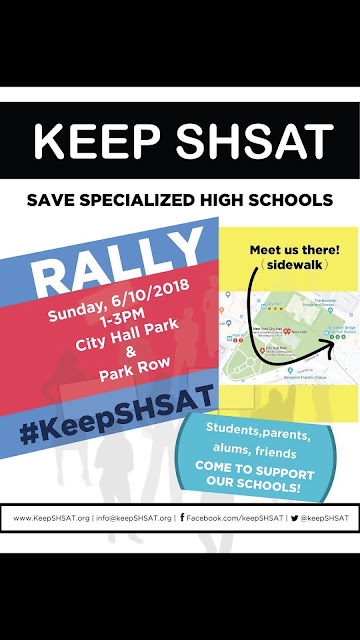 Posted by Queens Crapper at 6:58 AM

The number of Asians 72% attending these specialized shoals is clearly out of wack but you should not lower the standards to allow an increase of Hispanic and African Americans in. Obviously there is a need to raise the standards of the middle schools that they may be attending. Out of the 600 middle schools in NYC 50% of those students entering these prestigious schools are coming from 21 middle schools. What are those 21 schools doing right and what are those parents in those schools doing right and how can it be duplicated?

I support this effort to keep the specialized high school admissions test. Isn't that awful that we want the little gang bangers to sit down, be quiet, listen to and respect the teachers? Isn't it sooooo terrible that they too could study and take the admissions test and be placed in a really good school? No, I'm being sarcastic.

I can predict what will happen if the admission exams are scratched. Fights, violence, bullying of those who want to study and do well in school.

For the poster above, it's nice idea but it will not fly because the element that runs NYC schools does not want it to put such a plan into place. I include the students who are already criminals who use violence, threats and intimidation on a daily basis against anyone who is in front of them.

I truly feel for any good student in a NYC public school. From what I've heard from teachers it's hell.

Obviously, Anonymous here has never taught in the NYC school system. I did, for a quarter century. "Raising the standards" in middle schools is a typical outsider "cure" for low performing schools. You can raise the bar, but if your students could care less about education, come from homes which are anything but supportive of learning, have parent(s) who don't even know if their kid is even in school any given day, are out carousing all night during school nights, cut classes, live in foster care (an amazing number of NYC students do), fail to do any work required by their teachers--they are not going to be fit material for the specialized schools. Not only would they fail to pass the entrance exam, but they wouldn't have a ghost of a chance keeping up with the very high level and quantity of work required of you. They wouldn't even be capable of sitting quietly and attentively in a class; they'd be taking out their cell phone to play games on it, looking around, doodling, etc. because their low reading and writing levels would not permit them to understand the material or answer questions about it. Their extraordinarily small vocabularies would handicap them understanding lessons. Using texting abbreviations--"bc", "brb", "lol", etc.--would not be accepted in essays (can't tell you how many essays were submitted to me containing such abbreviations!). The teachers in those schools would NOT be impressed by how far the paper airplane they made out of the handouts can fly. I wasn't either.

No, "raising the standards" would not do a thing unless you raised the standards under which the students were reared. Having two parents in a stable home situation, having parents who read to them and helped them with homework, who regularly checked on their progress at school, who attended open school nights to meet with their kid's teachers, who set consequences for bad behavior is a lot of the reason why the Asian kids are dominating the admissions for the specialized schools.

I wonder who these parents and alums voted for, or if they stayed home on election day.

"Anonymous Gary W said... I wonder who these parents and alums voted for, or if they stayed home on election day"

Gary W, great way of saying it. To those who didn't vote at last year's Major election, "you" did it to yourself by not taking a couple minutes and vote, "you" got your chance and "you" didn't take advantage of your only chance to stop this madness (DeBassio).

Guess what, Debassio has 3 more chances to get rid of the SHSAT test (too late for this year), but "you" only got one and you wasted it, so please stop whining and shut up.

As far as I'm concerned, if you are voting Democrat, and I know many on this blog are from the way they discuss Congressman Crowley and his crew, you are part of the problem.

What you have seen here is a very clear example of how Democrat politicians attempting to pander to their constituency will attack and destroy established institutions with a proven history of effectiveness.

It will not matter if those institutions, such as religious faith, the traditional family unit or the military, are proven to form stable and prosperous societies over generations, what they are after is a redistribution of society.

They seek to extend power by pandering to those in society who haven't attained what others have attained by hard work and effort.

Equality of opportunity, once the golden standard from Lincoln to MLK, is no longer enough. The game has now turned to equality of OUTCOMES. Opportunity for all these students is not enough because the outcomes are not to the liking of radicalized Democrats like DeBlasio and Charles Barron.

This is how Venezuela has now run out of toilet paper and young girls are forced on to the streets. They started with the idealized notion of electing a "man of the people" who promised the teeming masses an "equalization" of society. What has resulted is a chaotic mess of starving refugees, dictatorship and the most dangerous place on the planet.

How many Asian voters marched to the polls for DeBlasio or did not vote at all?

BTW, I am Asian and voted for "anyone but DeBassio", while my voted didn't count since he won anyway but my mind is peaceful since at least I know that I did my part.

The reason Asians dominate most of these specialized high schools is because Asian parents invest big time $$$$$ in test prep from the time their children enter elementary school. These children literally prepare for the SHSAT from the time they're 5 years old.

There's no way they will accept dumping the SHSAT. They are heavily invested. No other racial group can possibly compete with the test prep Asian students are subjected to.

Im Asian too. Actually, i consider myself an American first before i say Asian. I've always played my part by voting every election. I am a Republican (a rarity for a NY'er and Asian), but I never sided with either side. I did my part in voting for Lhota and Maliotakis. NEVER deBlasio. The sound of him remotely near City Hall makes me want to hurl.

Also, as a former graduate of Brooklyn Tech graduating many many years ago, I find it repugnant that the thought of removing the test and allowing the top thugs in shitty schools in is even in consideration.

I guess to deBlasio's blind eyes, only Blacks and Hispanics are minorities, not Asians.

You are correct--Asians are no longer minorities in NYC. No one can argue that point. Asians are now an unwelcome majority (or plurality) like whites. Welcome to the club!

Whites are 33% of the NYC population, which means that whites are the Minority. But let's keep that our little secret. The majority of the population, blacks and latinos, don't want to get off the Minority Gravy Train.

It's not the schools, it's the students. The students who pass the entrance exam to Stuyvesant obviously did a good job in choosing their parents.

There are no bad schools, only bad students.

"Anonymous Anonymous said...
The reason Asians dominate most of these specialized high schools is because Asian parents invest big time $$$$$ in test prep from the time their children enter elementary school. These children literally prepare for the SHSAT from the time they're 5 years old.

There's no way they will accept dumping the SHSAT. They are heavily invested. No other racial group can possibly compete with the test prep Asian students are subjected to."

Having spent most of my life in BOTH education AND test prep, I can tell you that test prep alone at any level for any length of time cannot get the magical results referred to above. Children successful on the SHSAT come from families that value education, work with their kids FOR THEIR WHOLE CHILDHOOD on reading, math, everyday learning etc. And they come from good quality primary and middle schools. Test prep helps polish their skills at the end. You can test prep a 13 year old who has a poor general education, poor reading skills and math skills 24 hours a day for a year, and they won't pass the test.
If you want to equalize racial percentages in the specialized schools, you will need to develop the children, families and the NYC school system in such a way that they all are ready to take the test on equal footing. You can add some test prep too, but its effect is not much BY ITSELF.

In my senior year I sat next to an Asian-American, he was list like #2 or #3 in our class. One morning I happen to ask Steve why so many Chinese did so well. His answer was simple - "Our parents expect us to."

The teacher above is right. It has to start in the home.

But the system can also help.

Stop promoting people that should not be promoted. All this does is ruin the next grades experience for students because they share a classroom with students who should not be there.

Not helping your children to prepare for school and their future is parental neglect. A polite way of saying child abuse.

Asians are smarter because they study more. Less time spent listening to rap.
If they're gonna run the country, more power to them. The dumbing down of America has gone far enough!

The SHSAT prep is like the SAT prep. If you don't have a solid foundation you're going to fail. If you lack discipline you're not going to do well. NYC DOE offers free SHSAT prep in low income neighborhoods. Initially it was only offered to Blacks and Hispanics. How far is that. There's low income asians and whites too. It took a lawsuit to get DOE to change their policy.