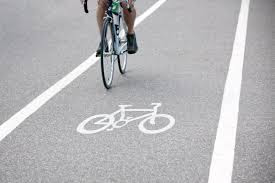 Longtime Bayside resident Helina Cheung, an avid cyclist and runner, said she and neighbors are left befuddled by a bike lane project recently installed in the neighborhood.

“When my husband and I saw the project, we said, ‘This project doesn’t make sense at all,'” Cheung told QNS while onsite.

The project along the Alley Pond Park edge, between Northern Boulevard and Springfield Boulevard, was installed by the city’s Department of Transportation (DOT) this past winter. It is one part of a larger safety project presented by the DOT to Community Board 11 in June 2017.

Community board members voted unanimously in favor of the Alley Pond segment of the project, while support for the Northern Boulevard segment, which has faced community scrutiny, has since been revoked. In March, QNS spoke with a local property owner who claimed the project causes “mass confusion” for drivers and pedestrians.

The Alley Pond safety project flipped the existing bike and parking lanes at the location and installed a four-foot protective buffer between the two. The bike lane is now situated closest to the park’s edge and cars are to park in a “floating parking lane.” A lane for moving traffic is situated next to the floating parking lane.

According to Cheung, many cars drive in the floating parking lane or bike lanes, creating dangerous conditions. A lack of signage and worn paint at the site add to this confusion, she said.
Posted by Queens Crapper at 12:17 AM

That whole bike lane makes no sense to have. A bike lane is supposed to be continuous but this bike lane end abruptly by the burger king. It only goes a few blocks. It's the stupidest thing I ever seen. Plus while I was coming off the exit for the cross island over there, I forgot there was a bike lane and almost turned into the stupid barrier.

Bike lanes have been responsible for an increase in pedestrian casualties since their inception.
LIVENSE ALL BIKES....plates and insurance!


I have been saying for years what that woman noticed. And it's a two way bike lane.

I noticed that road has curves too, how are cars supposed to maneuver if there are vehicle obstacles in the street. Not only that, but those two-ways aren't ample enough if more people start biking in the area. This has absolutely nothing to do with the supposed safety precautions that ignorant bike advocates continually browbeat community boards with.

Even the bike lane on the West Side highway in the city is not even roomy anymore because of all the bike traffic and you gotta deal with the stubborn joggers who refuse to use the pedestrian lane on the other side and the dickheads on the motor powered skateboards whizzing by you without warning.

And nobody is using the Queens Blvd bike lanes. no body.

I noticed that road has curves too, how are cars supposed to maneuver if there are vehicle obstacles in the street.

There is a traffic lane. If people cannot safely navigate one lane with curves they have no business driving.

Dumblasio just wants to force out everyone who is not a gothamist loving hipster/yuppie or living in a homeless shelter, that is his version of being progressive

Nobody uses Queens Blvd bike lanes because nobody wants to get killed. Too add no place to put the bike when you arrive. The train below the pavement is a safe quick faster option. Its air conditioned and heated during winter too !!
Most the store owners lost 40-60% of customers due to these bike lanes and hostility toward car owners. Parking was real bad 20 years ago but now its impossible
Some of these people in charge of the city and DOT need to be removed due to mental illness. They are not fit to serve

I'm so glad the city has all this paint to delineate bike lanes no one but a half-dozen soi bois want, while virtually all the major thoroughfares have their lane markings completely worn away. Talk about dangerous? It's horribly dangerous, particularly at night. You have no idea what lane you're in, and ditto the guys on either side of you. What a completely asinine order of priorities.

Yes there is a traffic lane anon, but parked vehicles in the middle of the streets with curves like that seem to make driving more difficult because the road is tighter. It would also cause more congestion too. Which is actually happening on 9th avenue in Midtown with the bike lanes there.

With the exception of a random ‘legit’ bicyclist, the bike lanes in the Sunnyside / Woodside are only used by delivery persons (placing my bets as to the citizen status of the individual) using E-bikes (thought they were illegal in NYC), oftentimes going the wrong direction, as designated by the bike-lane Gestapo. Yet, I’ve NEVER seen one of these individuals being pulled over by NYPD. So, in the world of the Baz, an illegal commands an illegal bike, creating in effect their own personal HOV lane, and the common citizenry have use their own presumably licensed & insured private vehicle, to putz along in the one available lane, contending with double parked delivery trucks, and woe be unto them, driving thru an intersection, all too aware that a red light camera is raring to snap a pic of your license plate, inevitably for taxes revenue, such that ebike-man and his kin are medically covered and get their belly fill & 5 kids educated.

The traffic has become terrible at Northern Blvd and 223rd Street (Cloverdale Blvd). The curve near Oakland Lake is so dangerous now. I have seen unaware drivers waiting behind the parked cars and cars driving both ways on the bike lane. The bike lane was safer before the re-design
The bike lane should be moved behind the sidewalk and into the park.

I have seen unaware drivers waiting behind the parked cars and cars driving both ways on the bike lane.

Unaware drivers. Now there is a bigger problem.

Instead of balancing building with improving transportation infrastructure to match increased demand created by building.....we get cheap bike lanes instead. Is this China where people commute on bikes? Whose go the contract for Citi Bike? Politicians friends at Citi Bank? Political pond scum have ruined NYC quality of life. Residential towers built for sardines and bike lanes!

Bike lanes in major metropolitan cities are a blueprint for disaster! Usually the biker gets it from a motorist or some poor pedestrian gets plowed into for unknowingly wandering into the path of speeding biker. I hate to break it to you folks but you will never have safe bike lanes in NYC. Maybe in Queens the best you can do is revamp the old velodrome that once, or might still exist. Velodromes are relatively safe and less expensive overall than chopping unsafe bike lanes into the traffic flow. Or move to someplace where biking is a way of life. I bike everyday that the weather allows in the small town that I live in. We don't gear up in shiny spandex and pointy helmets, it's just our way of life. And safe.

If you are not some famous billionaire, the city could not care less what you think, that being said even many of the billionaires have been moving out, actually they don't have to since they have homes all over the world. They can get out of town when they get sick and tired, regular slobs, well for you, you have to deal with the stupidity of this city.
I recently went to Mexico City, the difference? The subways there were clean, people dressed appropriately, behaved themselves, its very lucky over here if you do not run into some moron the subway here in New York that will ruin your day. Also the fact a city in a third world country has better public transport than the financial capital of America says a lot about what crappy people run this city.
Also Giuliani, to the people who hate him, I honestly think you are all idiots. He made this city livable when he was Mayor, too bad Giuliani's New York is dead and will never return.

I'm not to sure about that, were you drunk or maybe roofied by one of the half million cantina whores in some drug, roll & rob attempt ?